By Chen Yuewan and Lu Yutong 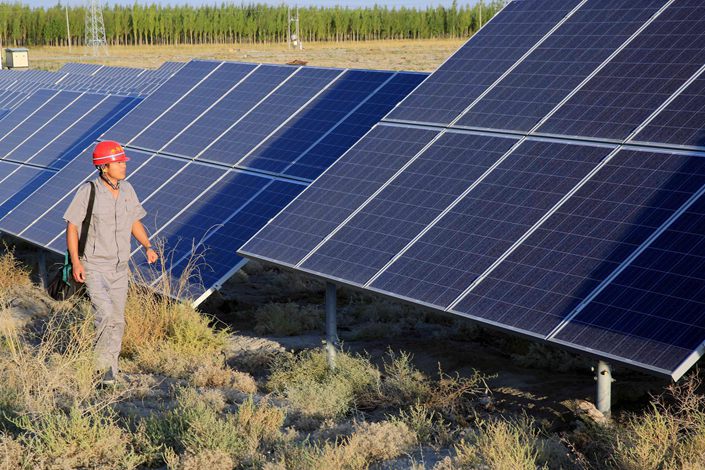 A worker walks past a solar power array in northwestern China on Sept. 11. Photo: VCG

China has revealed where the latest cuts to its solar power subsidies will fall, with residential and distributed industrial projects seeing cuts of 50% or more, while dedicated solar power plants will see their fixed selling prices reduced by far less in this round.

This news comes after the National Energy Administration said last month it was halving its solar subsidy budget.

The renewables sector has long benefited from Beijing’s largesse as policymakers sought to make the industry more competitive with conventional power sources such as coal and natural gas. That attitude has changed in recent years as manufacturing costs have come down, with the government now placing a priority on getting the renewable energy industry to stand on its own feet.

Starting from June 1, residential solar power projects will receive 0.08 yuan ($0.011) per kilowatt-hour of power generated, down 56%, according to an announcement from the National Development and Reform Commission (NDRC), the country’s top economic planner. These kinds of projects are generally installed on households’ rooftops, with the goal of cutting power bills and selling any excess power to the national grid.

A researcher at the NDRC told Caixin that the country may install about 6.25 gigawatts of residential solar power capacity this year, 15% more than last year.

For industrial distributed solar power projects, the subsidy has been cut to 0.05 yuan per kilowatt-hour, down by 50%. These kinds of projects usually involve many firms that are not dedicated energy companies generating power for their own use and selling on any surplus to the state.

Distributed projects that sell all their power to the state will have to bid at auction to win subsidies, which will not exceed 0.05 yuan per kilowatt-hour.

By comparison, solar power plants will see their prices cut by 10% in this round of price-setting, compared to a 20% last year. The price will be set based on a project’s location through local auctions with government’s limit on the highest possible price. Plants located in sunshine-rich Northwest China can sell their power for no higher than 0.35 yuan per kilowatt-hour, while power generated by plants in northern and central parts of China can be sold for up to 0.4 yuan, and the plants in coastal southern and eastern China can sell solar power at no more than 0.49 yuan.

Solar power plants that are built as projects to alleviate poverty will not see a reduction in their subsidies, which are higher than those for normal solar power plants.