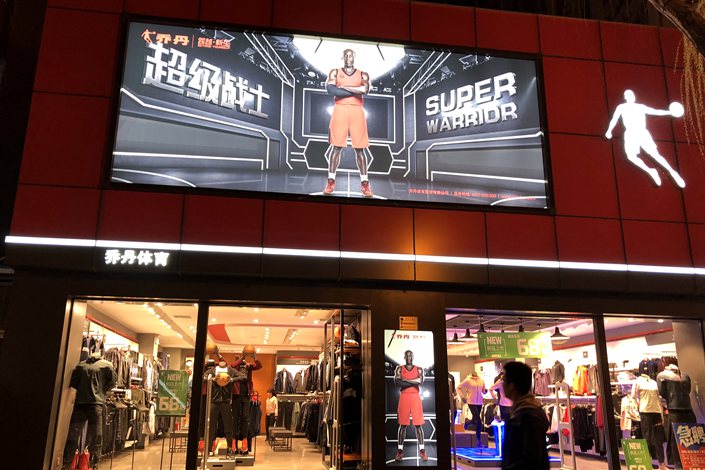 China’s highest court has revoked the trademark of Chinese sportswear-maker that it ruled the company’s name infringed upon the rights of the legendary American basketball star Michael Jordan.

The ruling is just the latest development in an eight-year legal battle between Jordan and Qiaodan Sports Co. Ltd. that has led to three of the sportswear-maker’s other trademarks being revoked and the company’s IPO plans getting derailed.

The latest trademark to be revoked was for the combination of Qiaodan’s name and its logo. The company’s name is the romanized pinyin version of Jordan’s name in Chinese, and its logo bears a resemblance to the one for sportswear-maker Nike Inc.’s Air Jordan brand. The Supreme People’s Court ruled that the logo did not breach Jordan’s “portrait rights” as the silhouette remained vague, but the trademark as a whole will be banned for use over the misleading name.

In a statement released Wednesday on social media, the Fujian province-based company said that 74 other trademarks disputed by Jordan remain valid, and the four that have been revoked will not have much effect on its business.

Jordan filed his first lawsuit against Qiaodan in 2012 to defend his name in light of a personal contract with Nike. The case ended up at the Supreme People’s Court in 2016 after Jordan’s requests were rejected by China’s Trademark Review and Adjudication Board (TRAB) and two lower courts in Beijing.

The lower courts had upheld TRAB's decision and rejected Jordan’s demand for damages, ruling that Chinese companies were free to use the name because Jordan is a common last name in the U.S.

China’s supreme court issued its first decision in the dispute in 2016 when it ruled that Qiaodan’s brand name violated Jordan’s rights. The court ordered the TRAB, which had backed Qiaodan in previous judgments, to review its decisions.

Despite its earlier victories in the dispute, Qiaodan paid a price for the legal tussle, which forced it to suspend its IPO plan for at least eight years. The company initially aimed to go public in March 2012 after its first IPO application got regulatory approval the previous November. The IPO never happened.

In 2013, Qiaodan sued Jordan for $8 million, accusing him of blocking its IPO. The following year, the China Securities Regulatory Commission mentioned the Qiaodan case in a press conference, saying that a “major unsettled lawsuit” was behind the commission’s decision to put the listing on hold.

Qiaodan eventually reapplied for the IPO. The application was accepted in April 2019 after an initial review, but is still pending further approvals.

The company was established in the 1990s under a different name in Quanzhou, Fujian, but renamed itself Qiaodan Sports in 2000. It expanded quickly. Between 2008 and 2010, the company’s revenues grew by 50% on average each year, according to a prospectus filed with the securities regulator in 2011.

The company and its affiliates have registered other Chinese-language trademarks that sound similar to the names of the Los Angeles Lakers and the names of Jordan’s sons, Jeffrey Jordan and Marcus Jordan.

Sun Liangzi and Coco Feng contributed to this report.