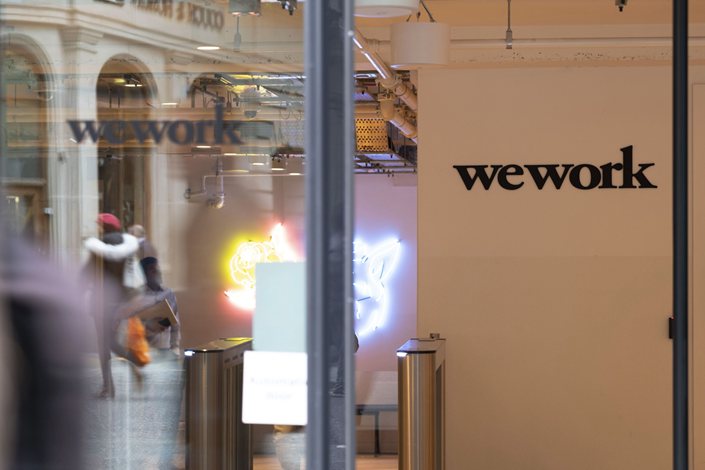 The WeWork logo sits on the entrance to the co-working office space, operated by the parent company We Co., on Eastcheap in London, U.K., on Oct. 7, 2019. Photo: Bloomberg

(Bloomberg) — WeWork hasn’t paid April rent for some locations and is approaching landlords regarding rent abatements, revenue-sharing agreements and other lease amendments as it seeks to trim liabilities, according to people with knowledge of the matter.

WeWork has paid this month’s rent for other locations, said one of the people, who asked not to be identified because the matter is private.

“WeWork believes in the long-term prospects of our locations and our relationships with landlords across the world,” a WeWork spokesperson said in a statement. “Rather than implementing a companywide policy on rent payments, we are individually reaching out to our more than 600 global landlord partners to work in good faith towards finding asset-specific solutions that benefit all parties involved.”

The New York-based co-working giant is in discussions with its biggest landlords globally as it aims to slash as much as 30% from its copious load of rent liabilities, which stood at $47 billion as of June 30, people with knowledge of the talks said last week.

WeWork bonds maturing in 2025 last traded Tuesday at 39 cents on the dollar, according to Trace bond-pricing data.

Company executives have been pitching solutions including revenue-sharing agreements. Such deals would give landlords the chance to collect a portion of future revenue generated by each property. Early indications are that landlords are reluctant, people with knowledge of the matter said last week.

WeWork, backed by SoftBank Group Corp., has been offering some tenants discounts to minimize cancellations amid government-mandated coronavirus quarantines, which have forced non-essential employees globally to work from home rather than reporting to offices such as those operated by WeWork.

Landlords are facing a reckoning across the globe. Retailers such as Hennes & Mauritz AB and Mattress Firm and restaurant chains including Cheesecake Factory Inc. and Subway have said they’ll postpone or slash April rent payments.

Other flexible workspace companies also have been in discussions with landlords as they seek to navigate the pandemic.

Knotel Inc., for example, has made “tough choices” about which of properties to cut ties with, CEO Amol Sarva said Wednesday. “We have targeted 20% of the portfolio that won’t be Knotels in the future and approached those landlord partners,” he said.