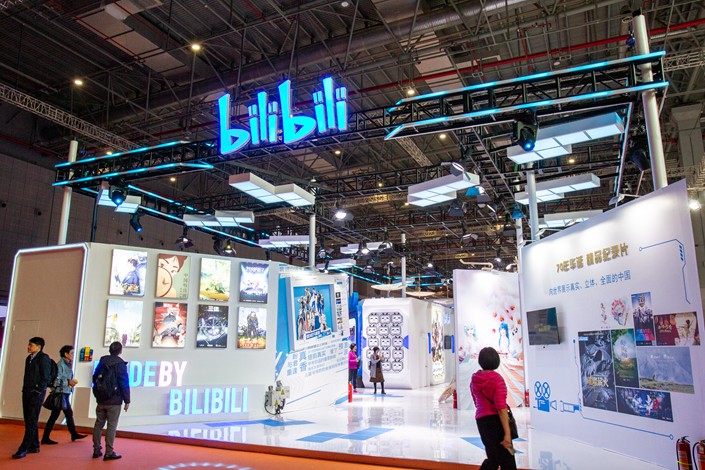 Established in 2009, Bilibili is one of very few Chinese internet startups backed by both Tencent and Alibaba. Photo: IC Photo

Chinese video streaming site Bilibili Inc. has gotten another big-name investor to join the ranks of its other big backers Tencent and Alibaba.

Entertainment giant Sony Corp. plans to take a 4.98% stake in Bilibili for $400 million in cash as the two seek closer collaboration in the anime, gaming and music businesses, the Chinese company announced Thursday before the market opened in the U.S.

Bilibili’s Nasdaq-listed shares were up as much as 13.5% during the trading day before losing some momentum to finish the day 2.4% higher at $26.83.

The deal, which was expected to close Friday, will dilute the stakes of Bilibili’s major shareholders.

According to Bilibili’s filing to the U.S. Securities and Exchange Commission, Tencent Holdings Ltd. and Alibaba Group Holding Ltd. were the company’s second- and fourth-largest shareholders as of Dec. 31. Tencent held 13.3% of the company and Alibaba had a 7.2% stake.

Bilibili Chairman Chen Rui was its biggest shareholder, with a 15.1% stake. Founder Xu Yi ranked third with an 8.8% share.

Sony’s investment will “further align our goals to bring best-in-class content offerings and services to our users as we increase our domestic stronghold in animation and mobile games,” Chen said in the announcement.

Sony’s ties with the Chinese site date back to 2014, when Bilibili started buying animation copyrights from Sony’s subsidiary Aniplex.

In 2016, Aniplex made Bilibili its exclusive agent in the Chinese mainland market for its game Fate/GrandOrder (FGO).

The game has since become the anchor of Bilibili’s gaming business, which has been the company’s major profit center since the beginning, said one industry expert, who asked not to be named because his company had not authorized him to speak.

Bilibili’s user community started out dominated by Chinese youths who were obsessed with Japanese cartoons. Many turned out to be gaming fans too, making FGO a great success for the company, the expert said.

According to Bilibili’s latest earnings report, online games contributed about 43.4% — or 871 million yuan — of the company’s total revenue in the fourth quarter of 2019. Online gaming remained the company’s biggest revenue source, though that quarter was the first time the figure came in below 50% as the company has tried to diversify its business by expanding into livestreaming.

Established in 2009, Bilibili is one of very few Chinese internet startups backed by both Tencent and Alibaba. The platform, which is particularly popular among young Chinese, went public in New York in March 2018 and had more than 130 million monthly active users by the end of 2019.