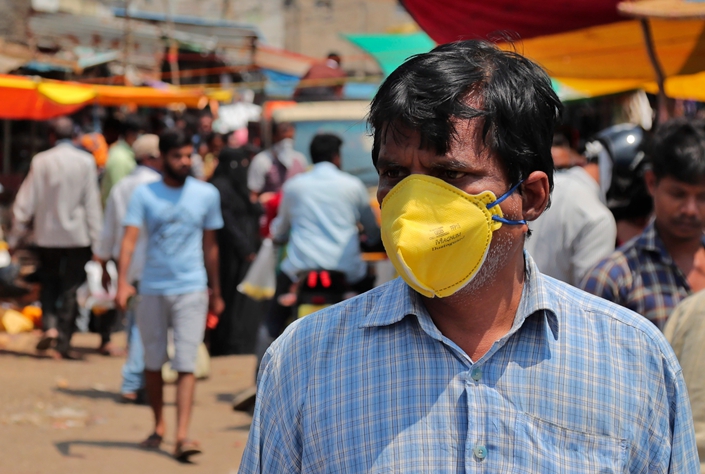 Consider a nation of 1.37 billion with 450 people per square kilometer, significantly more than the world average of 60 people and much higher than China’s 150. Its overcrowded urban areas, where large numbers of migrant workers congregate to earn daily wages, provide the ideal conditions for an accelerated spread of Covid-19.

Mumbai’s Dharavi, which features prominently in the Oscar-winning “Slumdog Millionaire,” is a prime example of India’s frightening population density woes. Spread across 2.2 square kilometers, the slum is home to over 1 million people living in unimaginably close proximity to one another and, therefore, unable to follow the most basic of “social distancing” or personal hygiene practices.

Now consider the mere 3.6% of its GDP that India spends on health, far below the world average of 10% and less than the 5% spent by China. A lone doctor for every 1,450 Indians is nowhere near the ratio of 1:1,000 prescribed by the World Health Organization, and a recent study estimates that there is only one government hospital bed per 1,820 people; China, by comparison, has one bed for every 240 people.

An overload on health care infrastructure is firmly in the cards with the onset of the pandemic. Its population already suffers from high rates of chronic illnesses such as hypertension and diabetes as well as respiratory diseases like tuberculosis and pneumonia. These can be fatal when coupled with Covid-19. Malnutrition, particularly amongst the 369 million Indians living in impoverished conditions, will further exacerbate the problem.

As an overpopulated and under-resourced nation attempts to “flatten the curve,” the trade-off was simple. On March 24, Prime Minister Modi chose “lives over livelihoods” and announced a “lockdown” of the world’s largest democracy for 21 days.

Though the total number of confirmed Covid-19 cases in India is more than 9,000 with 331 reported deaths, a lack of testing kits is hampering India’s ability to fully comprehend its actual level of exposure to the virus. Moreover, frontline health care professionals fighting the virus are already facing shortages of personal protective equipment as the numbers continually rise.

As the “lives over livelihoods” argument still holds, there are clear indications that the current lockdown will be extended beyond the April 14 end date. However, the impact of indefinite restrictions on movement and economic activity will be felt across all sectors due to an amplification of existing maladies and a consequent “crisis of confidence” will prevail for the foreseeable future.

A push for multilateralism

As it focuses on the enormity of the challenges at home, New Delhi has been encouraging others toward collective action to counter a shared global threat in the form of Covid-19. At a time when most nations are abandoning multilateralism and looking inward to contain the virus, India is keen to reassert its significance in the world as a responsible and collaborative player.

On March 15, Prime Minister Modi organized an e-meeting for leaders of the Member States of the South Asian Association for Regional Cooperation, or SAARC, which has for some time been held hostage to the ebbs and flows of the India-Pakistan relationship. Advocating concerted action among SAARC neighbors, he proposed the creation of a Covid-19 emergency fund, with India making an initial contribution.

The prime minister was also the first head of government to call for a G-20 summit via video conference to advance “a coordinated response to the Covid-19 pandemic and its human and economic implications.” This meeting was held on March 26, duding which the group pledged to inject $5 trillion into the global economy to fight the pandemic amid forecasts of a deep recession.

In recent days, India has been in the news for its decision to ease export bans on hydroxychloroquine (HCQ), cited by many as a possible treatment for Covid-19. It has committed to supplying an anti-malarial drug to the United States and other countries hit by the pandemic on a case-by-case basis “in view of the humanitarian aspects of the pandemic.”

Building on such efforts, India’s soft power has also been on display over the past several weeks in the backdrop of the ongoing pandemic. “Namaste” caught on as a form of hygienic, contactless greeting the world over and a recent video of the prime minister practicing yoga during the current lockdown went viral on the internet as a message to promote physical well-being.

Before and after images of New Delhi’s India Gate have also gone viral, the latter with clear blue skies representing the dramatic increase in air quality in a country that has 21 of the world’s 30 most polluted cities. This has provided a template to cities the world over to impose temporary lockdowns in the future to counter suffocating pollution levels that are a feature of global climate change.

On March 22, the citizens of India were asked to come to their balconies and front doors to applaud the courage of India’s frontline health care professionals and other essential workers. This nationwide show of support for the “corona warriors,” which informally originated in Italy and Spain, has since been replicated in other countries such as the U.K.

Two weeks later, the prime minister called on his fellow citizens to come to their balconies and front doors once again. This time, he requested all Indians to light a candle or switch on their flashlights as a symbol of togetherness and to “challenge the darkness spread by the coronavirus.” This exercise, too, has the potential to be adopted by other nations as a message to promote mental well-being and unity in the age of lockdowns and social distancing.

India’s push for multilateralism and the importance it is attaching to symbolic, positive messaging through its soft power credentials cannot be marginalized. Such efforts will help restore some of the goodwill it had perceivably lost in the eyes of many this past year, particularly the international media.

A repository of international goodwill is necessary in times of crisis. Right now, India is able to provide a potentially lifesaving drug to other nations in their hour of need. At a later stage of what will surely be a prolonged period of recovery, it may be India that is in need of support in the form of medical or financial aid.

Moreover, as geopolitical and geo-economic equations realign, India is positioning itself for a greater role in a post-pandemic world where collective action will also be required to manage other global threats such as climate change and terrorism.