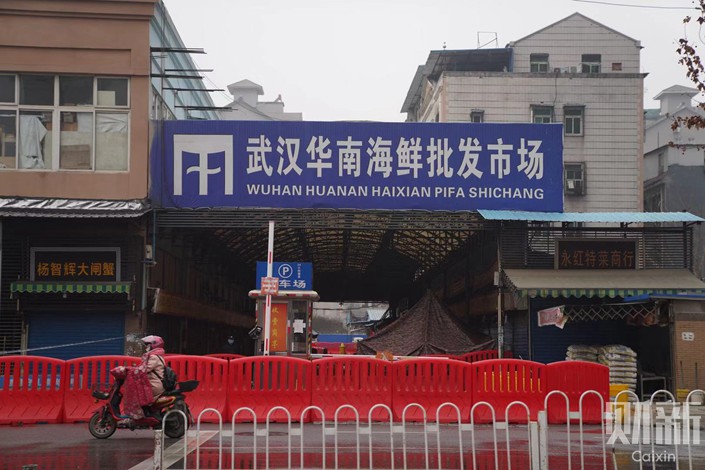 The South China Seafood Market in Wuhan had been shut down by Jan. 22. Photo: Ding Gang/Caixin

Diego Guelar is the former Argentine ambassador to China, the United States, the European Union and Brazil. The article, titled Let’s Not Blame China, was first published in Spanish by Inter Press Service.

At the end of November 2019, on my last official trip to the interior of China as ambassador to the country, I visited the South China Seafood Market in Wuhan, the capital of Hubei province. It was around this time that the mysterious viral mutation that gave rise to Covid-19 occurred.

In that place, they sold everything from fish to pangolins, such as bats, snakes, scorpions, crickets, rats, sea urchins, worms — in total, more than 100 different species of animal.

Wuhan is a hypermodern city of 11 million people, with supermarkets well supplied with all kinds of Chinese and foreign products of the highest quality and meeting the highest health standards. This “city of the future” coexists with remnants of the ancient Chinese history that includes the memory of one of the worst famines on the planet.

From 1850 to 1950, the “century of humiliation,” for the Chinese — internal wars and foreign occupations — including by the English, French, Russians, Japanese, Americans and Dutch created the need for people to consume protein “wherever they could find them.”

“Every bug that walks will end up in the grill,” a saying that the Argentines know well and associate with cows, sheep or pigs, but which most Chinese had no way to access.

Markets like the one in Wuhan are the vestiges of those times of utter deprivation when those wild species were the only possible option to complement a miserable portion of rice.

Until January 2020, when they were banned, these markets were the folkloric witness of that past, transformed into an "exotic" and very expensive gastronomy.

Viruses magically appear in the most dissimilar places: The so-called Spanish flu originated at the Fort Riley military base in the United States in March 1918 and caused 50 million deaths worldwide.

Its favorite “clients” were young people between 20 and 40 years old. And, just as it had appeared, it disappeared in 1920. It was called the Spanish flu because it was in Spain where the pandemic was most talked about (censorship hid news of the public spread the flu in most countries as the world still in the midst of World War I).

The black plague, which killed one-third of the European population between 1347 and 1353, was generated on that continent and came from a bacterium called Yersinia pestis.

What is remarkable in this case is that in January China launched a health campaign unprecedented in the history of humanity: it decreed total quarantine in Hubei Province (60 million inhabitants) and the strictest measures throughout the Chinese territory.

But during December and the first weeks of January, millions of Chinese went out into the world and millions of foreigners circulated through China. The epidemic was poised to become a devastating universal pandemic.

The western world took two months to react. It felt that this new virus was a distant disease, which — just as it had appeared — would disappear by magic.

The World Health Organization (WHO) was slow and negligent even though from the beginning all the data pointed to the fact that the pandemic was inevitable and would require a swift and aggressive response.

This was not the case and, by March, it was too late. The virus was circulating freely throughout Europe, Central Asia, the Middle East, and the United States. In Latin America, its devastating route had begun.

If we had all acted in unison, we would already be facing the end of the pandemic — as China is today — and not starting the process that will consume so many human and material resources.

So we must thank China for its determined response. If it had not done so, this pandemic would already have spread like the Spanish flu or black plague.

Hopefully we — and many others — have acted in time.

Caixin Global publishes a diverse range of opinions as letters to the editor on our blog. We'd like to hear what you are thinking or experiencing around the globe. Please submit your thoughts in publishable format to our email: blogen@caixin.com.