China’s Aluminum Producers Forced to Shut Down as Prices Plummet 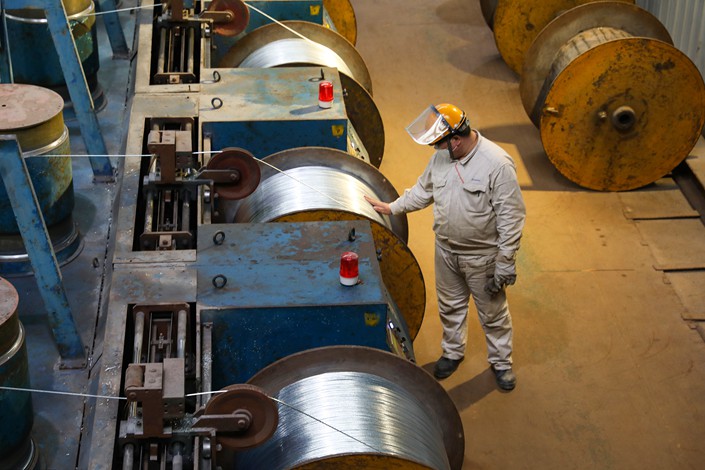 A worker touches a spool of aluminum-alloy steel wire on March 12 at a plant in Nantong, East China’s Jiangsu province.

China’s aluminum industry has seen prices plunge due to weak demand amid the Covid-19 pandemic, pushing smelters to suspend production.

More than 20 smelters in the country with a combined 709,000 tons of capacity have halted production in the name of maintenance or equipment renovation as of Tuesday, data from aluminum information provider AZ China Ltd. suggests. The world’s second-largest aluminum producer, China Zhongwang Holdings Ltd., has gradually suspended 230,000 tons of output capacity since Tuesday.

The mass shutdown was driven by a slump in market prices. The most-traded aluminum contract on the Shanghai Futures Exchange fell as much as 15% to 11,950 yuan ($1,689) on Wednesday from 14,090 yuan at the beginning of the year. According to AZ China, the full cost of electrolytic aluminum in China was 12,455 yuan per ton last week, indicating that 84% products or around 30.48 million tons were likely sold at a loss.

Some major producers have put expansion plans on hold to avoid oversupply, Caixin has learned. Aluminum Corp. of China Ltd. (CHALCO) has suspended a project in hydropower-rich Yunnan province that would have expanded its annual production capacity by 500,000 tons. Shandong Weiqiao Aluminum & Power Co. Ltd., another major producer, has postponed until October a 2-million-ton expansion originally due to begin its first phase of operation in July.

Zhang Meng, an analyst at AZ China, said many downstream factories haven’t received a large volume of orders for May and June due to flagging demand. Oversupply amid weak demand will be a heavy blow to the industry, and may force uncompetitive smelters with high costs to exit the market, said one senior industry insider speaking to Caixin on condition of anonymity.