China Must Get a Grip on Data Collection in Wake of Covid-19, Lawmaker Says

By Wang Liwei and Dave Yin 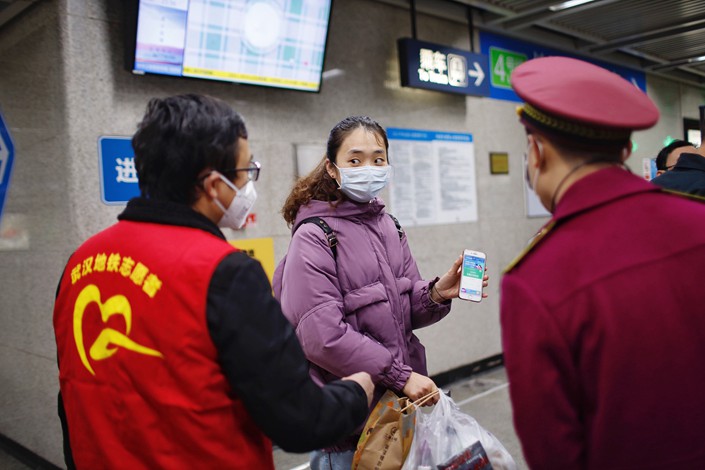 Data science has played a huge role in the fight against the Covid-19 pandemic, according to Jiang Xiaojuan, head of Tsinghua University’s School of Public Administration. Now she says both the government and companies must do their part to advance its development.

Jiang, as both a member of the Standing Committee of the National People’s Congress (NPC) and a former deputy secretary-general charged with overseeing science and education by China’s State Council, brought up the subject at an April 11 lecture she gave at her university. She said that data technology has key uses in both disease prevention and daily life.

In disease prevention, the use of data encompasses patient records and treatment, mapping the epidemic, contact tracing and categorization. For daily life, data has been applied to deliveries, online education, remote work and e-commerce. Among China’s most prolific application is its “health QR code,” developed by the Chinese government and hosted by internet giants Alibaba Group Holding Ltd. and Tencent Holdings Ltd., which has been used to assess a person’s medical history and risk of infection.

According to Jiang, it could be said that the surging pandemic has leveled the world’s playing field in terms of data collection. Even Europe, which has some of the most stringent privacy laws, has unveiled legislation permitting greater data collection amid the pandemic, in recognition that human lives are paramount. The U.S., which traditionally has allowed such data to be used only in the medical system, now permits interdepartmental transfer and use without an individual’s permission, Jiang said.

“In a pandemic, the public supports these actions, since it’s in the public’s benefit, but we must think about what will happen in the future. Will we go back to how things used to be, or allow ourselves to take a step further?” she said.

Jiang suggested lawmakers create a standard on the policy level according to both international standards and domestic needs. For China, that could mean prioritizing privacy laws at the next Standing Committee meeting at the next session of the 13th NPC.

In December, a spokesperson for the working committee for legislative affairs of the NPC Standing Committee had said that privacy and data security laws would be drawn up in 2020.

According to Jiang, it’s difficult for governments to account for the speed of innovation, and it is therefore vital to reinforce the role that the market plays. She also said that it’s important to believe in the abilities of these companies, explaining that having survived fierce competition, they have “comprehensive capabilities and vision.”

While China had three state-owned companies hailing from the oil and bank industries representing it in the world’s 10 largest companies by market capitalization in 2010, in 2019, this had changed to two representatives, both private companies in the digital economy.

“The government and market should each play their distinct role in the development of the digital economy, a basic market force,” Jiang said. She added that many issues have yet to be resolved on the policy side, namely the governance of using data balance against privacy concerns, as well as the need to make greater use of new economy indicators, as was discussed at several high-level central government meetings.

But to Jiang, the underlying technology is not without its own problems. Citing the example of Cambridge Analytica in the U.S., which collected the personal data of millions of Facebook users without their consent for political advertising purposes, she said that data technology could be used to meddle in the economy, in society and in the lives of private citizens. She added that there are also issues about the truthfulness of data and how algorithms can result in discrimination.

“This could have a major impact on the structure of society and people’s formulation of ideas,” she said. “In the face of these many administrative questions, the government must step up its research and allow for improvements to technology to benefit the people.”

This story has been updated to clarify that the health QR code was developed by the Chinese government.