In Depth: How Four Conspirators Pulled Off a $240 Million Loan Scam

By Wang Heyan and Denise Jia 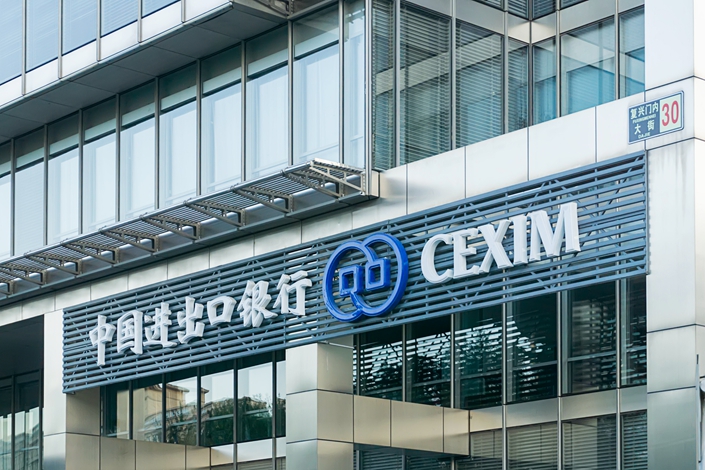 A former branch head of the Export-Import Bank of China is serving life in prison for loan fraud. Photo: VCG

On a January day in 2017, Xu Jianping met with two clients from an investment management company and a movie-making investor in the lobby of the Beijing Branch of the Export-Import Bank of China. The four of them then entered the office of branch President Li Changjun, who was waiting.

Two days later, Nest transferred a trust loan of 100 million yuan ($14.1 million) from Guangdong Yuecai Intrust & Investment Co. to the movie-making investor, Shenzhen Yonghengcheng Cultural Investment Co. Ltd. According to the agreement, the money was supposed to fund a movie studio project. But Nest had no idea that the project had already been terminated.

Not only did the project no longer exist, but the whole transaction was a scam. Except that Li’s position as president of the bank was real, everything else — the paperwork and the official seal ― were all fake. Even Li’s assistant who helped to prepare the paperwork was actually a con man hired to put on a show. They money actually went into the pockets of four conspirators including Li and Xu.

The Nest deal was the final in a series of such scams. Less than a month later, Li turned himself in to authorities for reasons that have never been disclosed. Over four years, through fake loan guarantees, he helped Li Hongrong, the Shenzhen movie investor, to obtain 1.7 billion yuan ($240 million) of loans from banks and securities and investment companies, of which more than 1.4 billion yuan couldn’t be recovered when the banker turned himself in.

Li Hongrong paid about 60 million yuan of commissions to Xu, who spent the money supporting a luxury lifestyle. Li Changjun got more than 17.64 million yuan in bribes from Li Hongrong over the years, according to a court document. The fourth member of the group was an unemployed man named Deng Cong who was hired to pose as a bank employee.

The 100 million yuan Nest loan guarantee transaction didn’t go through the bank’s books but rather was a “hidden guarantee,” in which the legal representative of a financial institution provides a guarantee in the name of the bank for businesses in connection with himself. Such off-books, hidden guarantees provided a loophole that swindlers used to enrich themselves, prompting authorities to crack down on the abuses.

Since 2017, China has issued a series of regulations to tighten supervision of banks’ off-balance sheet business. China’s top banking regulator in early 2018 banned banks and other lenders from arranging entrusted loans, whereby companies provided credit to each other with banks acting as intermediaries.

The new rules have made it harder for conspirators like Li Hongrong’s group to pull off such schemes, a banker at Bank of China said.

Li Changjun, now 56, worked at the Finance Ministry and the National Council for Social Security Fund before he joined the state-owned policy bank, the Export-Import Bank of China. In 2012, he was appointed president of the Shenzhen branch of the bank, and then in 2016 head of the Beijing branch.

The CCDI did not elaborate on Li’s alleged violations. But multiple sources told Caixin that Li admitted to having issued letters of credit or letters of guarantee for personal purposes when he was working at the Export-Import Bank.

In August 2017, the bank disclosed the results of an investigation, finding that Li took advantage of his position to seek profits for others and accepted huge amounts of money and gifts. His suspected bribery and other economic and financial crimes were then turned over to prosecutors.

Authorities have not issued an update on Li Changjun’s case since. He was sentenced to life imprisonment in December 2018, Caixin learned from sources. He didn’t appeal the sentence and is imprisoned in Baoding, a city 90 miles south of Beijing.

Li Hongrong was arrested in May 2017. He was sentenced to 20 years in prison and fined 3.6 million yuan for loan fraud and bribery. Several companies controlled by Li Hongrong were also fined a total of 19 million yuan for similar crimes. He appealed the sentence, and the trial of his appeal began at the end of 2019. A sentence has yet to be imposed.

Xu was sentenced to six years in prison and fined 1.5 million yuan. Deng was sent to prison for two years.

As details of Li Changjun’s trial were never publicly disclosed, the court’s findings in the case of Li Hongrong shed light on how the scams were developed and executed.

It all started when Li Hongrong, 60, a businessman with operations in Guangzhou, Foshan, Shenzhen and Zhuhai ran out of cash. Most of his operations are shell companies with no revenue. At the end of 2012, he sought help from Li Changjun, whom he met at a dinner party in Beijing. But Li Changjun refused to approve a loan to Li Hongrong because his companies didn’t meet the bank’s requirements.

Xu, a broker who collects commissions by connecting lenders and companies that need cash, offered to help. Xu said he could find the funds but only if Li Hongrong could get a loan guarantor and pay at least a 10% commission. The desperate businessman came back to Li Changjun, proposing a “hidden guarantee.”

Loan guarantees go through the same strict review process as loan approvals. Under bank rules designed to prevent self-dealing, someone besides the person who signs an agreement must apply the bank’s seal to make the transaction official.

To overcome this hurdle in the proposed transaction, Li Hongrong promised to provide a fake seal and find a “reliable” person to act as the seal carrier. He then spent a few hundred yuan to buy fake seals for the Shenzhen and the Beijing branches of the Export-Import Bank. He also hired Deng to pretend to be the bank employee with the seal.

The scheme unfolded for the first time in 2013. On the day the lender, Founder Bea Trust Co. Ltd., reviewed the guarantee agreement, Xu brought representatives of the lender to Li Changjun’s office. After they confirmed Li Changjun’s title and the bank’s license, the branch president called in Deng posing as a colleague.

Deng presented the guarantee document for Li Changjun to sign. Then Deng took the lender’s representatives to another room to apply the fake seal to the document.

Everything went according to plan. Li Hongrong got a 400 million yuan loan from Founder Bea Trust through the fake guarantee. Once he tasted this success, he couldn’t stop running the scam, and the four conspirators kept it going until Li Changjun went to the authorities in 2017.