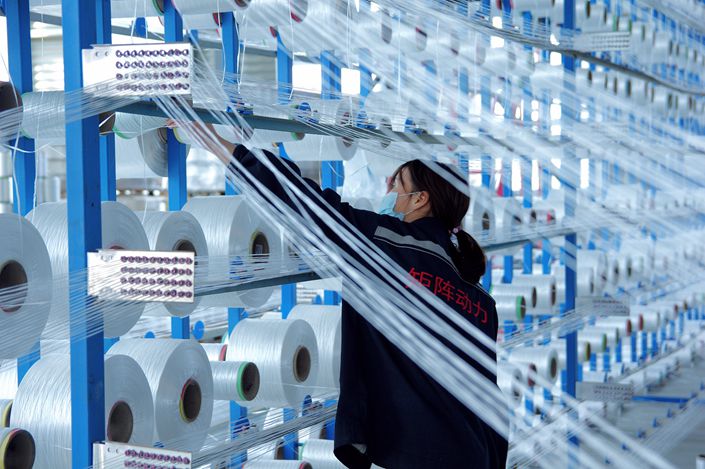 The economic impact of the coronavirus pandemic is severe. In China, experts are divided over the GDP target the country should now set for 2020, or even if it should set a target at all.

Advocates for target-setting are in the ascendance. But opinions vary about how it should be done. Some argue for setting a slightly higher goal on the basis that falling slightly short will still mean an above-average economic performance. Others are calling for a lower target in order to give the localities more wriggle room.

Some scholars have suggested only setting growth targets at provincial level, instead of writing out a figure for the country as a whole. Some are calling for a method of evaluating China’s “relative growth rate” compared to the rest of the world. And some are clearly advocating for indexes like fiscal expenditure, social finance, and employment to replace a hard-and-fast GDP target.

Each argument has its merits. The debate is helpful for deepening people’s knowledge of the problem and making government policy more science-based. In the end, of course, the decision will be left to China’s policymakers.

For the moment, the GDP debate can’t be settled. But one thing we don’t need is a growth target that ignores the huge economic uncertainty wrought by Covid-19, stems from tasks set prior to the outbreak, or sparks a race for the best-looking statistics in the provinces.

What the pandemic means for the future is unclear, but our economy is tied to it and faces enormous uncertainty. That makes any basis for setting a GDP target much less reliable.

In recent days, China’s Politburo has focused less on completing the task of the annual economic and social development targets and focused on “stabilizing fundamental economic drivers.” For the first time, the body also mentioned the so-called “six guarantees,” referring to the need to vouchsafe citizen employment, basic standards of living, market participation, food and energy security, stable product and supply chains, and basic government operations.

Evidently, realizing the six guarantees is more important than meeting a target for GDP growth. Some have said, with good reason, that the guarantees can’t be met without a certain amount of economic acceleration. But the problem is that setting a growth target doesn’t mean that acceleration can be achieved.

The proverbial fly in the ointment in this debate is that they have devolved into arguments over technical details instead of focusing on several basic issues. Instead, we should be using these discussions to ponder the improvement of China’s market economic system, the transformation of its growth engines, and the modernization of its social governance systems and capabilities. The current wrangling reflects the predicament of a system stuck halfway.

One such issue is this: Why do we need to set a GDP growth target at all? In fact, the answer is unclear. The idea of growth targets originated in China’s pre-reform planned economic system. During the first years of the reform era, the central government switched from a command-driven plan to a guided one. But even after establishing the socialist market economy as the aim of systemic economic reform, the practice of setting annual growth targets persisted — with both benefits and drawbacks.

For more than 40 years, competition between Chinese localities to achieve higher GDP growth has played an essential role in China’s transformation. However, the negative side of that is becoming increasingly apparent, with governments pursuing short-term growth and ignoring long-term aims. This problem has manifested in China’s lopsided economic development, which has ignored public services and come at great cost to the environment. Put simply, that kind of no-holds-barred growth is no longer sustainable.

In recent years, more and more voices in China have questioned the importance of GDP growth targets. In view of this, GDP acceleration targets have been revised into “expected” targets, with hard-and-fast figures being massaged into a more elastic range of values.

However, it remains difficult to dampen local governments’ enthusiasm for GDP numbers. This has brought about harmful consequences like overcapacity, spiraling government debt, and increasing financial risks. Many areas have also deliberately overestimated their GDP figures.

People often attribute those issues to shortcomings in the ways the government appraises the performance of officials. In fact, the Communist Party has never used GDP growth as an official metric for promoting or transferring key officials. But the focus on GDP remains hard to shift, something that reflects the intergovernmental relationships and incentive mechanisms in China under the current system. The exercise of power and supervision mechanisms still fall markedly short of the targets set at the 19th Party Congress to modernize China’s governance systems and capabilities.

In the last few years, more and more scholars have argued for a weakening of the GDP growth target and the corresponding development of “green GDP,” a different set of indices for sustainable development. But their efforts have so far only had limited success. Few indices are as simple to calculate, lacking in controversy, and easily comparable as GDP. A more diverse index system would be meaningful, but there are no prospects for pushing different metrics in a bid to control so-called “GDP worship.”

As China’s economy transitions from a period of rapid growth to a period of so-called “high-quality” development, growth will be checked by continuously falling latent GDP growth rates. The consensus both at home and abroad is that if the country can achieve deeper, wider-ranging reforms, those potential growth rates could rise.

In recent years, the Chinese government has resolutely refused the temptation of strong economic stimulus. At the same time as controlling the recent disease outbreak, the government has also assigned a number of reform tasks. We look forward to seeing them implemented, especially land reform, household registration reform and state-owned enterprises reform, and the acceleration of urbanization efforts.

One scholar who favors setting a target for GDP growth says that “because China is such a large nation, it needs a target or it won’t be able to do the work.” This is a relatively representative position, but does it have a sound basis in fact?

China’s “Two Sessions” were postponed due to the coronavirus outbreak, meaning the country has not yet been able to set this year’s economic growth target. However, this has not hindered comprehensive efforts to revive productivity and gotten people back to work. This is a rare opportunity to observe how the economy performs when it’s not working toward a GDP target and how governments at all levels promote economic work.

Few other countries announce yearly GDP growth targets. Perhaps when China finally abandons the practice, the country will have matured its market economic system and modernized its governance systems and capabilities.