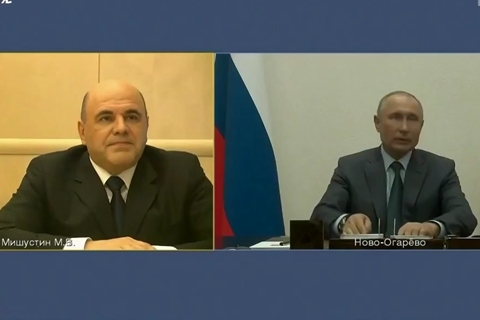 (Bloomberg) — Russian Prime Minister Mikhail Mishustin said he had tested positive for coronavirus and would temporarily step down, becoming the nation’s most senior official to be diagnosed with the illness.

“The tests I did for coronavirus came back positive,” Mishustin said in a televised video conversation with President Vladimir Putin. “As a result, I must observe self-isolation and fulfill my doctors’ orders, which is necessary to protect my colleagues.”

The Russian leader accepted his suggestion that First Deputy Premier Andrey Belousov be named acting prime minister during Mishustin’s absence. Putin said he will still seek Mishustin’s approval for decisions on economic policy while he’s in isolation. “I plan to remain in active contact by telephone and videolink,” Mishustin said.

Mishustin, who showed no apparent symptoms of the virus during his brief appearance, said he will be going to hospital later Thursday. He and other Russian officials, including Putin, have been conducting public meetings by video link in recent weeks. Mishustin spokesman Boris Belyakov said those who had been in contact with the prime minister recently would also be isolated and tested.

“What’s happening to you could happen to anyone,” Putin told Mishustin on the video call. “I’ve always said that.”

“I want to wish you a quick recovery,” Putin said. “Please call me when you get to the hospital.”

Putin named Mishustin, 54, as prime minister in January, calling on him to accelerate efforts to jump-start economic growth. But the former tax chief’s agenda was quickly overtaken by the spread of the virus and the collapse in prices for oil, Russia’s main export.

The government moved quickly to impose travel restrictions to limit the contagion and its infection totals for weeks lagged those of harder-hit countries. But the numbers have increased steadily in recent weeks and Putin has extended orders to stay at home through May 11.

In his comments to Putin, Mishustin appealed to Russians to “take the coronavirus infection and its spread as seriously as possible,” calling on his countrymen to follow the government’s self-isolation orders over the upcoming long holiday weekends. “The date when the country can return to normal life depends on the willpower of each of us.”

Russia has reported a total of 106,498 cases of the virus, with 1,073 dead. But Moscow Mayor Sergei Sobyanin warned earlier Thursday that the capital, which leads in the number of affected patients, “is at best a quarter of the way along the path” of the virus. He said more than half of all patients in the city’s hospitals are sick with the ailment.