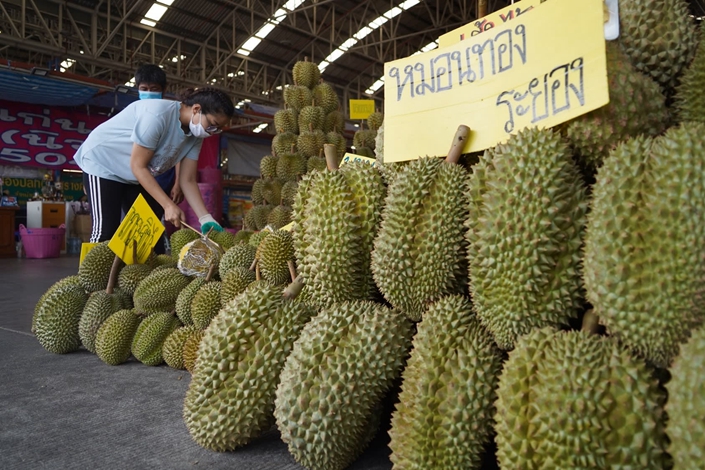 Chinese buyers visited Thai durian farmers in March, when the fruit was still raw, to ensure a supply despite the coronavirus pandemic. Photo: Nikkei Asian Review

(Nikkei Asian Review) — As the durians ripen in her orchard of 180 trees, Vipavadee Teplasamee eyes a lucrative harvest in May of the fruit regarded as “green gold” in Chanthaburi, a province southeast of Bangkok.

The 46-year-old Thai fruit farmer pins her hopes on China’s appetite for the durian, which remains steadfast.

Even the coronavirus pandemic has failed to break this supply chain. The army of Chinese middlemen who fan across Thailand to buy the fruit directly from orchards during harvest season took an unusual step this year. They visited farmers like Vipavadee in March to book the fruit, then raw, in advance before flying home prior to Thailand shutting airports to international flights.

Vipavadee echoes the sentiments of other fruit farmers who were guaranteed sales of their harvest despite the economic disruption.

“The Chinese buyers have built up a wide network and know when we are ready to pluck the fruits,” said Vipavadee, whose income from past sales helped to pay off 600,000 baht ($18,500) in debt and also buy a Mazda pickup truck. “This year should be another good season.”

The wholesale price for durians in the current harvest has ranged from 105 to 115 baht per kilogram. And the retail price in Thai markets at the start of the harvesting season in March was 150 baht.

Last year the wholesale price was 80 to 90 baht. Prices went up this year because there was a severe drought during the growing season and the early harvesting season, so fewer fruits were supplied to the market.

Chinese middlemen placed orders for the fruits this year as they did in the past. Time worked in favor of Thai farmers, since they began harvesting just as China began to ease the lockdown, enabling them to sell the fruits that had been pre-booked by the middlemen earlier.

The international nexus over the green, thorny fruit — which is an acquired taste, given its strong odor yet creamy flesh — has left its mark on Chanthaburi, Thailand’s largest durian-producing province.

“It is hard to keep track of the new durian orchards coming up,” said Somnuck Jongmeewasin, an environmentalist at Silapakorn University’s International College in Bangkok, who is tracking the changing landscape. “Every day, farmers are changing crops from growing rubber to durian.”

Rubber cultivation in Chanthaburi has shrunk to 89,782 hectares, from 177,736 hectares in 2012. Durian orchards have spread to fill the void, now totaling 30,400 hectares, according to a team of researchers led by Somnuck.

“The rubber prices dropped over the last five years, and it drove farmers to shift to the more lucrative durian,” he said. “Almost half of Chanthaburi’s agriculture area is now growing durian.”

The spike in durian cultivation, driven by rising demand in China and higher prices for the fruit, has taken root elsewhere in Thailand as well. Nationwide cultivation covered 152,000 hectares by 2019, up from 96,000 in 2012, the Office of Agricultural Economics says.

The farm gate price of the monthlong variety of durian — or “golden pillow,” the cream of the crop — rose to 100 baht per kilo by 2019 from about 35 baht per kilo seven years earlier, the office says.

Analysts regard this market-driven shift as a familiar pattern in a country with large farming communities.

“It is the nature of farmers in Thailand to grow substitute crops with higher prices, especially with small or medium-scale farmers,” said Punpreecha Bhuthong, senior researcher at the Thailand Development Research Institute, a think tank in Bangkok. “The case happens commonly in short-term crops like cassava, maize and sugarcane.”

The Commerce Ministry promotes the export of fruits like durian to China as a way to boost foreign-currency earnings. These fruits accounted for nearly 6.5% of Thailand’s exports in 2019. Thailand produced 600,000 tons of durians in 2018, much of it for export, and 70% of the exports went to China.

Chinese investors have even tapped durian supply routes in Thailand’s southernmost provinces along the border with Malaysia, where an insurgency has been raging since 2004. A Songkhla province factory established in mid-2019 processes the fruit into various products to satisfy Chinese tastes, including durian candy bars, the Thai Ministry of Agriculture and Cooperatives says.

In mid-2018, Thai durian farmers received a shot in the arm when Jack Ma, co-founder and executive chairman of top Chinese e-commerce company Alibaba Group Holding, offered tons of the fruit for sale on his digital platform. Within 60 seconds, 80,000 “golden pillow” durians, weighing 200 tons, were snapped up on his Tmall retail website.

Thailand’s Southeast Asian neighbors also benefit from the Chinese market for durian, dubbed the “king of fruits” in the region. Malaysia has exported frozen durians to China since 2019.

In the first half of last year, China imported 358,000 tons of durian, worth an estimated $963 million, more than double the volume and value of the fruit imported in all of 2018, according to China’s Ministry of Agriculture and Rural Affairs.

Farmers in Chanthaburi are hardly surprised by the voracious appetite that makes China the world’s largest durian importer.

“Chinese believe it is a special fruit and need to eat it regularly,” said Savarat Nangsangian, a 56-year-old durian farmer. “Their demand for durian is good for us. We smile when the Chinese middleman comes to book our fruits before the harvest.”