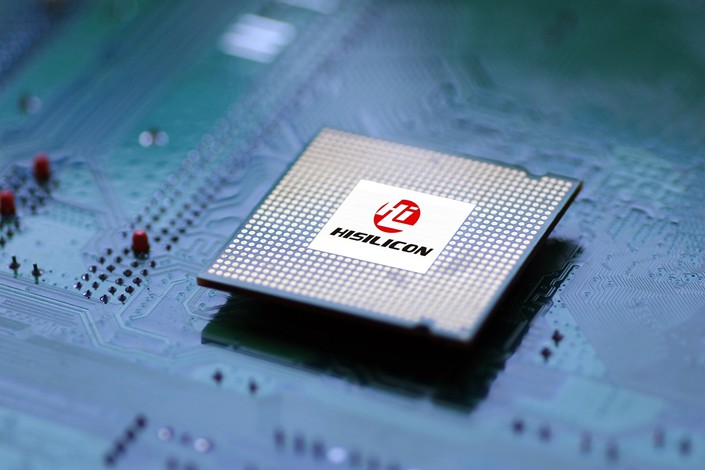 Huawei Technologies Co. Ltd.’s semiconductor design arm HiSilicon has become the first Chinese mainland-based chipmaker to break into the world’s top 10 for sales, climbing five places in the first quarter to scrape in at No. 10 behind suppliers from the U.S., South Korea and Taiwan.

The unit grew its global sales by 54% year-on-year to $2.67 billion for the quarter, according to a report by IC Insights. But the surge was mostly down to parent Huawei, with more than 90% of sales for the period going to the world’s largest telecoms gear-maker, the report said.

The IC Insights data comes a week after the publication of a CINNO Research report showing HiSilicon was China’s biggest supplier of smartphone chips in the first three months of this year, surpassing the erstwhile champion Qualcomm, which ranked No. 7 on IC Insights’ semiconductor sales list.

HiSilicon’s sales growth comes as Huawei doubles down on proprietary semiconductors after the U.S. banned American tech companies from doing business with the Chinese giant. U.S. regulators are working to clarify how American firms can work with the sanctioned company to set global standards, but any changes are unlikely to assuage Huawei’s overseas woes.

In March, Reuters reported that senior Trump administration officials had agreed to a proposal that would require foreign companies using American chipmaking equipment, such as TSMC, to obtain a U.S. license before selling chips to Huawei. This likely sparked a reported decision by Huawei to shift production of self-designed chips away from TSMC to Shanghai-based Semiconductor Manufacturing International Corp. (SMIC), which is preparing to list on Shanghai’s high-tech STAR Market.

American chip giant Intel led the global semiconductor market with $19.5 billion in first-quarter sales, more than seven times that of HiSilicon, while South Korea’s Samsung came in at No. 2 ahead of TSMC. Five other U.S. suppliers and another from South Korea made the list.