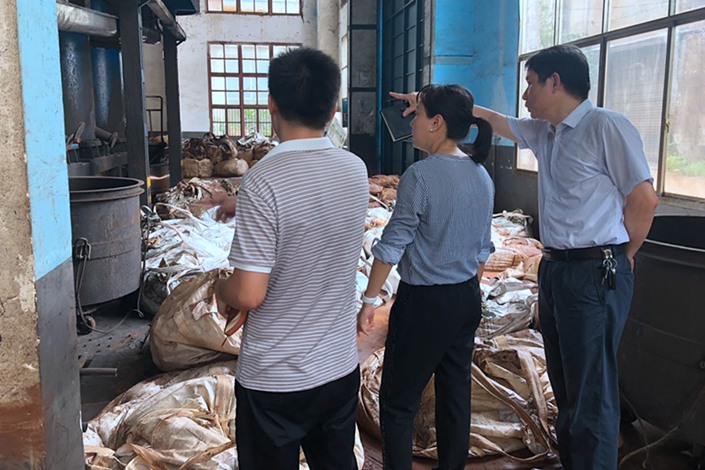 A high-level supervision team inspects affliliates of China Minmetals on May 11. Photo: Ministry of Ecology and Environment

Chinese authorities have published a litany of environmental violations by the state-owned metals and minerals behemoth China Minmetals Corp. and its subsidiaries, illustrating the ongoing challenges of pivoting the world’s second-largest economy onto a greener footing.

Minmetals failed to ensure environmental compliance at its affiliates and turned a blind eye to illegal pollution and emissions fraud over several years, according to a report (link in Chinese) published by the Ministry of Ecology and Environment (MEE) on Monday.

The disclosures come as China’s top environmental compliance watchdog, which falls under MEE’s direction, conducts a new round of inspections around the country. Beijing has placed the environment high on the agenda in recent years by tightening emissions standards, incentivizing the green industry and cordoning off areas for conservation.

The ministry has recorded more than 120 breaches of environmental law at Minmetals subsidiaries in 11 provinces since 2015, the report said. Some affiliates treated emissions accounting as a “numbers game” and sought creative ways of making their operations look greener than they were, it added.

In one case, Minmetals subsidiary China Metallurgical Group Corp. effectively wrote off 8,508 tons of sulfur dioxide emissions produced by Huludao Zinc Industry Co. Ltd. after giving up its role as the company’s controlling shareholder. That sum accounted for 95% of Minmetals’ overall sulfur dioxide reductions between 2016 and 2018, according to the statement.

In another case, Minmetals insisted to government officials that it had “rectified” environmental transgressions by its central China-based subsidiary Chenzhou Diamond Tungsten Products Co. Ltd. even though local residents continued to complain of foul-smelling gas emissions and large piles of hazardous solid waste.

A succession of recent MEE reports has singled out other Chinese regions for environmental lapses.

Inspectors in the southwestern megacity of Chongqing found (link in Chinese) that the banks of the Yangtze had been damaged by piers and harbors built in violation of an official policy to restore and conserve Asia’s longest river. Officials in other parts of Chongqing had falsified environmental rectification reports and allowed housing projects to be built in protected forests.

In the eastern province of Fujian, officials landed in hot water (link in Chinese) for failing to adequately protect vulnerable coasts and turning a blind eye to illegal land reclamation projects.

Rural officials in western China’s Qinghai province allowed (link in Chinese) household waste to be buried underground, a practice that worsens soil pollution. Inspectors expressed concern at the continued discharge of effluent into the rivers feeding the much-feted Qinghai Lake, an important site for migratory birds and other species.

Meanwhile, in neighboring Gansu province, authorities found (link in Chinese) that officials in one city had inflated the number of households that had converted to clean energy, while those in another county had failed to clear up industrial effluent discharged into the Gobi Desert, resulting in the formation of large pools of polluted water spanning an area of more than 25,000 square meters (6.2 acres).