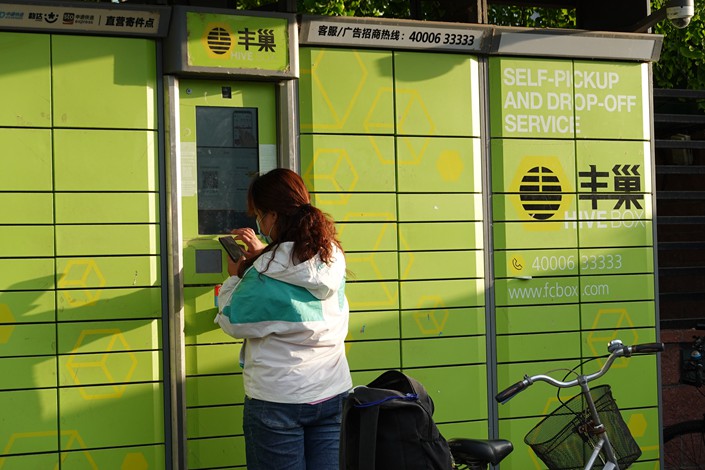 A major operator of delivery pickup stations in China has run afoul with residents across the country for its decision to begin charging for storing packages more than 12 hours.

The growing outcry illustrates how much Chinese people have come to rely on home delivery for their online purchases during the coronavirus pandemic, when most stores and offices were closed, leaving many people to depend even more on e-commerce and related logistics services.

Shenzhen Hive Box Technology Co. Ltd., a 5-year-old startup controlled by SF Holding Co. Ltd., the parent of delivery giant SF Express, operates a network of stations in apartment complexes and other central locations around China. The stations, which look like blocks of lockers, give couriers a convenient place to drop off packages when residents aren’t home. They also give residents an easily accessibly place to pick up their parcels if they missed delivery. Typically, residents can wait up to 24 hours to pick up a package before they are charged.

But Hive Box, which has yet to turn a profit, decided in late April to begin charging fees starting at 0.5 yuan (7 U.S. cents) for users to pick up packages that have been in storage for over 12 hours. The change took effect at the beginning of May, but the company didn’t announce it on its website or publicize it on social media. Once residents noticed the change at the stations, the backlash was quick.

On Sunday, the residential committee of a large apartment complex in Shanghai joined several others who had decided earlier to suspend Hive Box’s service in their communities due to resident complaints. They asked Hive Box to reinstate its previous policy of not charging unless a package has been in storage for more than 24 hours.

In response to the criticism, Hive Box said in a statement (link in Chinese) Saturday that the new 12-hour rule was meant to speed up package pickups in order to increase the turnaround time for parcels stored at its stations as space was limited. The company noted that the change had already increased the proportion of packages picked up within 12 hours by 5 percentage points.

Companies like Hive Box make most of their money by charging package delivery services fees for using their self-service pickup stations as the stations save couriers time by sparing them from the hassle of going to the door of every recipient on their delivery list.

These stations make express delivery services more efficient because the time saved on each delivery more than makes up the small fees they have to pay the pickup stations, said Shao Zhonglin, a former deputy chief of the China Express Association, an industry association.

Hive Box continues to burn through cash as it seeks to increase its share of the market. In the first quarter of 2020, it lost 245 million yuan on revenue of 334 million yuan, according to a statement by its controlling stakeholder. Last year, it lost 781 million yuan on annual revenue of more than 1.6 billion yuan.