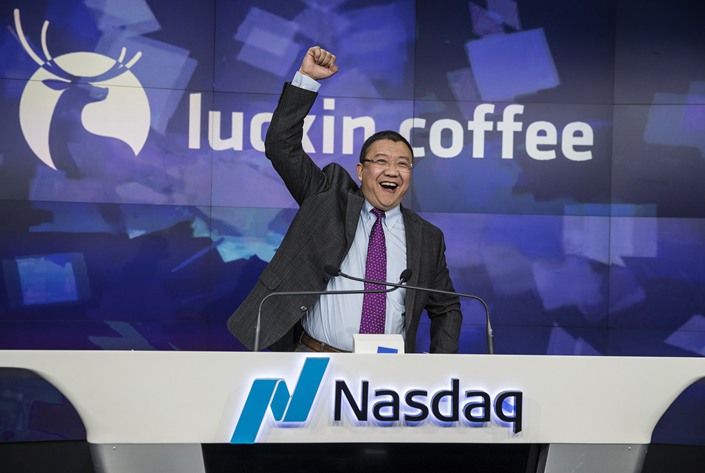 Scandal-plagued Starbucks challenger Luckin Coffee has announced a massive management overhaul in a bid to win back investor confidence, even as observers said more radical steps were needed to save the troubled company.

Luckin announced the termination of its CEO Qian Zhiya, who also goes by Jenny Qian, as well as COO Liu Jian, as part of a massive shakeup less than two months after its April 2 revelation that 2.2 billion yuan ($310 million) worth of transactions may have been fabricated in the last three quarters of 2019. In addition to leaving their executive positions, the pair also resigned from the company’s board, according to the Tuesday announcement.

Luckin Chairman Lu Zhengyao, who also goes by Charles Lu, also appeared to have left the company’s nominating and corporate governance committee. He was listed as a member of that committee in a January filing, but his name did not appear among its members in the latest announcement.

Luckin said it had also placed six other employees who were involved in the alleged fraud or had knowledge of it on suspension or leave. It named Guo Jinyi, a senior vice president, as the company’s acting CEO.

“Following issuing the press release by the company on April 2, 2020, the company has been cooperating with and responding to inquiries from regulatory agencies in both the United States and China,” Luckin said. “The company will continue to cooperate with the internal investigation and focus on growing its business under the leadership of the board and current senior management.”

Insiders told Caixin Luckin’s own internal investigation is moving forward, including the formation of a special committee of independent directors that has hired the law firm Kirkland & Ellis and accounting consultant FTI to assist. But observers said the removal of two of the company’s top officials may not be enough to win back investor confidence.

“The company’s fraud and flat-footed response have significantly reduced investor and market confidence,” said Brock Silvers, CIO at Adamas Asset Management in Hong Kong. “But the primary underlying issue remains the company’s highly dubious business model. The most likely scenario may still be a wind-down of the business.”

Another source at a small investment house that trades in companies like Luckin said a sale of the company may be one of the few alternatives left to keep it alive.

“Given the size and scope of the event, it seems unlikely that changing a few key positions would materially alter the corporate culture, which is perhaps the biggest problem with the company overall,” he said. “Therefore investors may not have much confidence until a more drastic move is made. It seems like Luckin needs a miracle right now.”

Luckin’s shares fell more than 80% in the days after the scandal was first disclosed, and have been suspended from trading in New York pending a request for information by U.S. regulators. China’s securities and market regulators have also opened investigations into the company, whose actions many believe have damaged the broader reputation of Chinese companies listing overseas.

Luckin itself began looking into the situation as early as March, following market rumors sparked by a report circulating online saying much of the company’s revenue had been faked.

Two people close to the company told Caixin that in mid-March, Luckin auditor Ernst & Young pointed out several “suspicious transactions” to the company’s audit committee, and the committee informed the board and asked for information from relevant accounts. But the company’s four executive board members, including Lu, had failed to hand over the material in timely fashion. Several days later, an initial investigation determined the existence of more than 2 billion yuan in fake transactions.

The formal removal of Qian and Liu may be designed to assist the company’s own internal investigation, a person from one of the company’s institutional investors told Caixin. “They’ve been investigating for a month without finding anything, which could be the result of these people not wanting to have things discovered,” the investor said.

Before her ouster as CEO, Qian was a longtime protégé of Lu, coming to Beijing from Wuhan to help him set up a business in 2004 at the age of 28. Former COO Liu moved into that position in 2018 and became a member of Luckin’s board in February 2019. Both Qian and Liu held previous positions in Lu Zhengyao’s car services empire, centered on Hong Kong-listed rental car specialist Car Inc. and limousine services specialist Ucar.

Luckin tried to position itself as a high-tech coffee purveyor that could challenge Starbucks in China. The company became known for its minimalist coffee shops that accepted orders only by smartphone app, and quickly passed its U.S. peer in China to become the nation’s largest coffee chain. But some questioned its business model, which relied on rapid growth fueled by opening new stores and offering large discounts to acquire customers.