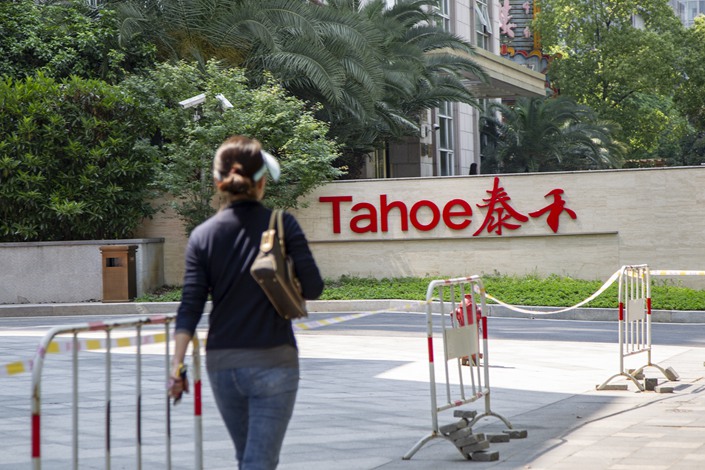 Cash-strapped real estate developer Tahoe Group Co. Ltd. has decided to suspend its planned acquisition of an insurance subsidiary of its controlling shareholder due to perceived challenges in getting regulatory approval in the wake of its defaults.

The Shenzhen-listed company, which is based in East China’s Fujian province, had planned to acquire a 100% stake in Tahoe Life Insurance Co. Ltd.’s Hong Kong operations and 99.85% of its operations in neighboring Macao.

The planned deal required the approval of both the Hong Kong and Macao insurance regulators. In its statement Wednesday announcing the halt to the acquisition, Tahoe Group cited significant uncertainties in seeking approval from the regulators because it has defaulted on several of its debts.

As of the end of the first quarter, the company owed 67.2 billion yuan ($9.7 billion) in bank loans, bonds and other forms of debt due by the end of March 2021. Meanwhile, it had less than 5.6 billion yuan in current assets, an accounting category that includes cash, cash equivalents and deposits paid on land use.

Since the second half of 2019, Tahoe Group has been sued by multiple creditors for failing to repay its debts on time. As of Monday, there were at least 14 records of Tahoe Group defaulting on its debts. That means it’s unable to meet acquisition conditions required by Hong Kong’s insurance regulator.

On Wednesday, Tahoe Group also disclosed it may receive a strategic investment from an unnamed real estate developer, though Chinese mainland authorities still need to sign off on the deal, according to the announcement.

Rumors that Tahoe Group might be bringing in a new investor have been swirling for since last year, but have never been confirmed.

Trading of Tahoe Group’s stock, which had been suspended on April 28 after the company announced its reorganization plan, resumed Thursday. Its shares finished the day down 3.41% at 4.25 yuan.