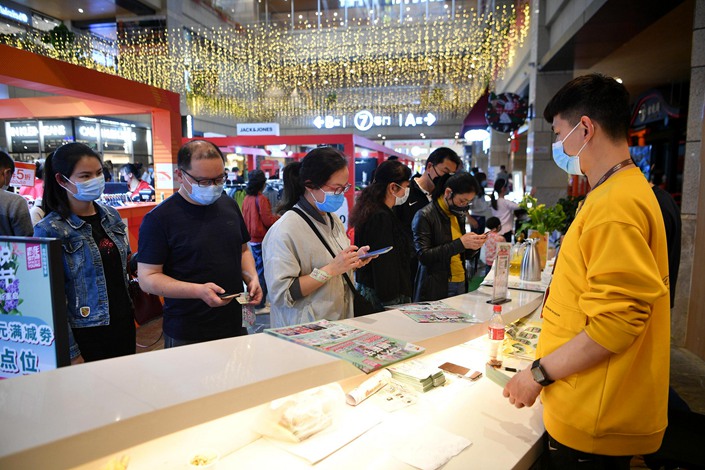 There is no unified statistical method to measure the effect of consumption vouchers, so further independent research will be necessary to understand their impact.

Many local governments have issued digital consumption vouchers via the country’s dominant mobile payment platforms to boost the coronavirus-hit economy, but experts say this is unlikely to become a regularly used policy tool.

Consumption vouchers, some of which are digital and accessible through platforms including Ant Financial Services Group’s Alipay and Tencent Holdings Ltd.’s WeChat Pay, have been distributed across 28 provincial-level regions and over 170 prefecture-level cities, Wang Bingnan, a deputy head of the Ministry of Commerce, said at a briefing (link in Chinese) last week.

Wang said that the value of the already distributed vouchers, which can be chiefly used for retail and catering spending, amounted to over 19 billion yuan ($2.7 billion).

Wang said that the vouchers have boosted consumption growth and offered a helping hand to businesses that had been hit hard by the coronavirus outbreak.

Ant Financial CEO Hu Xiaoming, also known as Simon Hu, said on Wednesday at a forum in Beijing that over 100 cities have used Alipay to distribute digital consumption vouchers. Hu said that Alipay’s data showed that for every 1 yuan distributed through the vouchers, consumers are spending an extra 8 yuan. In some areas, this figure has reached 15 yuan, he said.

However, there is no unified statistical method to measure the effect of consumption vouchers, so further independent research will be necessary to understand their impact, industry insiders said.

Some concerns have emerged about this policy, with some observers expressing worries that it might further entrench the dominance of Alipay and WeChat Pay. In the fourth quarter of last year, Alipay had a 55% share of the third-party mobile payment market, while Tenpay Payment Technology Co. Ltd., a Tencent subsidiary operating WeChat Pay, took up 39%, according to a report (link in Chinese) from data provider iResearch Consulting Group.

Che Ning, a deputy secretary of the Beijing Network Law Society, told Caixin that the distribution of digital consumption vouchers has given internet giants like Ant Financial an opportunity to obtain users and build a more engaged user experience that incorporates offline experiences, while establishing a better relationship with the government. However, Che said that more platforms should be allowed to distribute vouchers to ensure fairness.

Zhou Yanli, a former vice chairman of the now-defunct China Insurance Regulatory Commission, said that consumption vouchers will likely be an effective short-term policy, but that it would cost a lot of money and could jeopardize fairness if only a few certain industries are favored.

Bai Chongen, dean of Tsinghua University’s School of Economics and Management, said that any long-term use of the vouchers will require further assessment. Household consumption accounts for a low proportion of the country’s GDP, and though expanding this proportion is a long-term goal, consumption vouchers may not be the best way to do so.