Chinese People Can Go to the Movies Again, but They Better Not Touch Anything 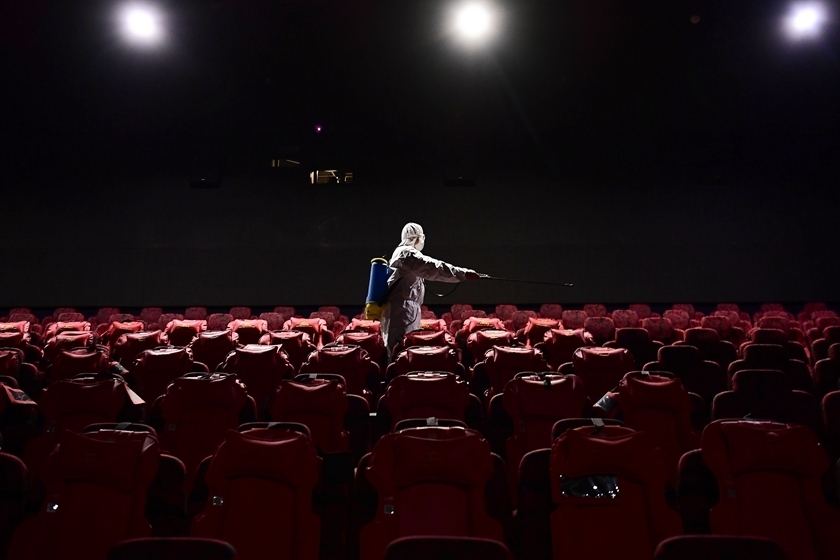 Movie theaters in certain parts of China are being allowed to reopen.

China is allowing movie theaters in certain parts of the country to reopen with strict social distancing restrictions after closures since late January because of the Covid-19 pandemic.

The Chinese Center for Disease Control and Prevention (CDC) said Wednesday that cinemas in regions with low risks can reopen by appointment and with reduced capacity, but those in areas with medium to high risks should remain closed.

Audiences are urged to take protective measures while going to the movies, including avoiding touching surfaces in theaters, wearing masks and going only with family members, Shi Xiaoming, head of the National Institute of Environmental Health of the CDC, said Wednesday in a press conference.

Theater operators should make sure occupied seats are at least one meter apart from each other and should clean and disinfect public facilities on a daily basis, including screening rooms, seats and 3D glasses, Shi said.

The CDC didn’t define which areas are low risk, but a document released Friday by the State Council said China is moving to reopen all public indoor entertainment facilities, including cinemas, museums, art galleries, libraries and stadiums.

Cinemas have been among the businesses hit the hardest by the epidemic as people stayed home and movie production halted.

To help theaters resume business, the China Film Group, the largest state-owned film enterprise in the country, released five movies March 17 to cinemas across the country and agreed to take no cut from box office revenue. Usually, theaters keep about 57% of ticket sales. Theaters were also urged to lower ticket prices to lure audiences back to the big screens.

China briefly attempted to restart fewer than 5% of cinemas in March in certain parts of the country. But business was dismal, with average box office revenue of less than $10 a day at each theater. The China Film Administration soon closed theaters again nationwide.

While theaters are closed, some movie producers have turned to online platforms to stream films originally scheduled to run in theaters, angering cinema operators.

Right now, there are at least eight domestic movies that haven’t jumped to online, including animated feature “Jiang Ziya” and a documentary about Chinese tennis star Li Na.

Meanwhile, with the pandemic spreading globally, many potential Hollywood blockbusters — “Wonder Woman 1984,” “Mulan” and “Black Widow” to name a few — have been pulled from initial release dates, leaving Chinese theaters no foreign movies to show even if they reopen.