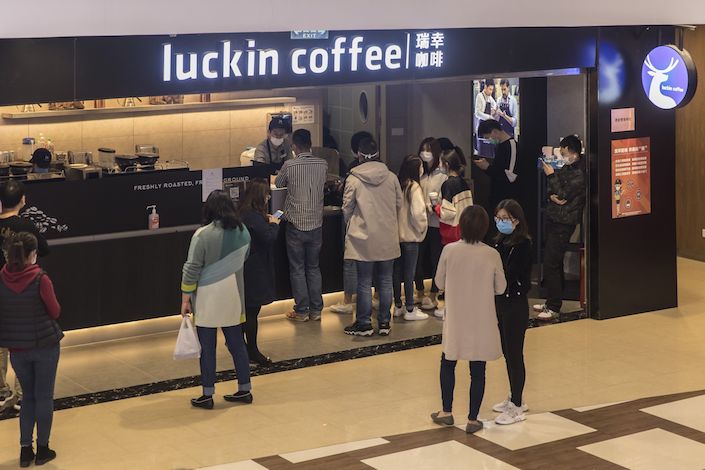 (Bloomberg) — Luckin Coffee Inc. is opening stores at a breakneck pace in China and pledging internal company change as it tries to move beyond an escalating scandal involving the reporting of $310 million in fraudulent sales.

The coffee chain opened 10 outlets a day in its home market in the second quarter as of May 12, bringing its total number of stores to 6,912, according to Thinknum Alternative Data, a New York-based company that collates company operations data from public channels.

Luckin appears to be trying to use rapid growth to stay afloat amid a scandal that has claimed a raft of top executives and forced the suspension of its Nasdaq-traded shares. The chain, which had ambitions to beat Starbucks Corp. in China’s budding coffee market, faces scrutiny from regulators there and in the U.S. The controversy is a black eye for Chinese businesses, which already face headwinds from the trade war with the U.S. and proposed legislation to delist Chinese companies from American exchanges.

While that pace marks a slowdown from the first quarter, when Luckin opened an average of 20 stores a day after raising $778 million in capital markets, it’s more rapid than in the same period a year ago. Luckin revealed April 2 that a large portion of its revenue last year was most likely faked.

In an internal memo issued Tuesday and seen by Bloomberg News, Luckin apologized to employees and their families for the damage wrought by the financial scandal. The fraud has plunged the company into an “unprecedented crisis” and put it at the mercy of public opinion, said the memo, signed by the chief executive’s office.

Luckin fired its chief executive officer and chief operating officer this week, and six others were either suspended or placed on leave. Guo Jinyi, a board member and senior vice president, was named acting CEO.

The memo pledged change under the company’s new management and said the investigation into the fraud was ongoing.

“The new management will restructure company organization, rebuild company values and culture, strengthen internal controls to ensure compliance to law and regulations, and do all we can to maintain stable operations,” it said.

A representative for Luckin couldn’t immediately comment on the Thinknum data or the memo.

Founded in 2017, Luckin accelerated its expansion every time it received more money from investors. It has added more than 2,200 stores just this year, according to Thinknum’s data.

To reach its goal of having 10,000 shops by 2021, the company has relied on a cash-burning strategy of offering generous discounts to lure patrons: First-time customers got a free cup of coffee and six vouchers for 50% off future purchases. It’s a growth strategy that costs about $130 million a year.

After raising $645 million in its U.S. initial public offering in May 2019, Luckin opened 1,280 new stores in the third quarter, an average of 14 a day. That compares with fewer than two a day in the previous quarter. The company then raised a combined $778 million from an additional share sale and a convertible bond offering in early January.

Once considered among China’s brightest growth stories, Luckin said in early April that it was investigating whether senior officials were involved in fabricating transactions of about 2.2 billion yuan ($310 million). That announcement sent its New York-traded shares plummeting more than 75% in a single session. Trading has been halted for more than a month.

Luckin delayed reporting its annual results last month, saying it was unable to prepare the financial report because of the coronavirus pandemic. That raised questions about how long cash flow can continue supporting the breakneck expansion, especially amid sluggish Chinese consumer demand because of the pandemic.

Getting the company back on track may be a daunting challenge. Luckin has released only two quarters of results, the most recent in November, when it reported better-than-expected revenue and said it planned to break even this year, even as its net loss widened. Last month, its offices in China were raided by authorities as part of a multi-agency investigation into its finances, Bloomberg News reported.