By Wang Jing and Flynn Murphy 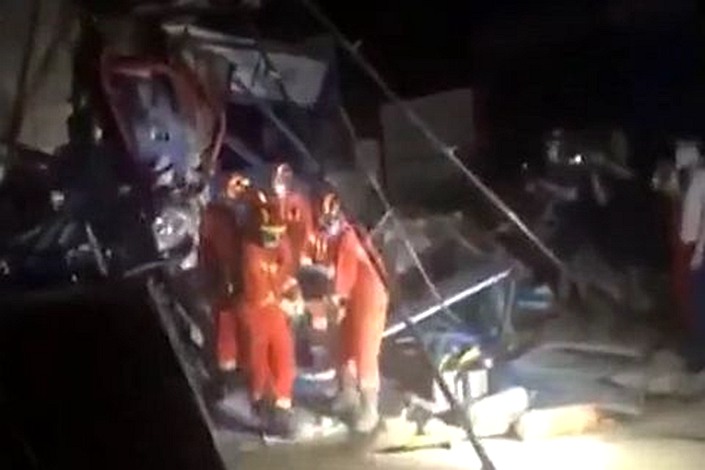 All of Country Garden’s projects in Guangxi have been suspended pending safety inspections.

Foul play has been alleged after six people were killed at a building site in southern China when a construction elevator collapsed on Saturday evening.

The deaths were reported by local workplace safety regulators on Sunday.

Video circulating on Sina Weibo showed firefighters carrying a person on a stretcher away from twisted metal wreckage to ambulances waiting at the scene on Saturday night.

A preliminary investigation blamed improperly installed equipment for the tragedy, and the provincial workplace safety bureau has ordered inspections of all construction hoisting machinery and equipment.

But doubts have been raised over the official version of events, with sources from both the project management firm and the equipment leasing company telling Caixin the construction elevator was installed and tested in accordance with regulations, and had a complete maintenance record. They alleged the lift may have been sabotaged, and said a report had been lodged with local police.

Country Garden Real Estate Group Co. Ltd., which owns the project, told Caixin it had set up an emergency working group to investigate. The company’s senior management was at the scene on Saturday night and was cooperating with the local government of Yulin in the Guangxi Zhuang autonomous region, which has undertaken its own investigation.

The deaths have thrown a spotlight on Country Garden’s patchy safety record. In 2018, Caixin reported how a string of deadly accidents and collapses had some pointing the finger at the company’s high turnover model, which focused on aggressive expansion and quick sales in third- and fourth-tier Chinese cities.

Guangdong Longyue Construction Engineering Co. Ltd. is the construction company contracted on the 320 million yuan ($45.1 million) project, which spans 63,500 square meters (683,500 square feet), according to a permit issued in July.

All of Country Garden’s projects in Guangxi have been suspended pending safety inspections.