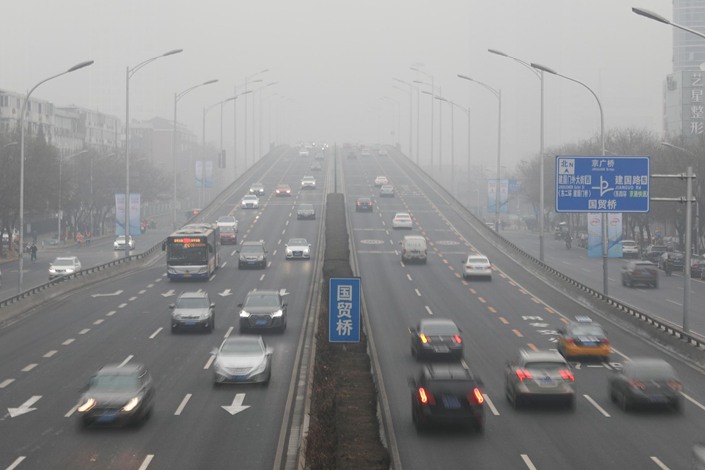 China’s air pollution levels recently surpassed concentrations over the same period last year for the first time since the coronavirus crisis began, fueled by an increase in industrial emissions, a new report has found.

The analysis, published Monday by the Center for Research on Energy and Clean Air (CREA), a global environmental research organization, deepens concerns that government officials may put environmental issues on the backburner when they meet in Beijing this week to plot the country’s post-pandemic economic recovery.

“As the world’s largest carbon dioxide emitter and as the first major economy to reopen after the crisis, all eyes are on China,” said CREA lead analyst Lauri Myllyvirta. “It is essential for policymakers to prioritize clean energy and reduce the country’s economic reliance on highly polluting, energy-intensive industries.”

Air pollution levels plummeted in February and March as China effectively shut down to deal with its deadly Covid-19 outbreak. Governments across the country shuttered businesses and implemented strict quarantine orders, causing a dramatic fall in energy consumption.

Nationwide levels of airborne PM2.5, ultrafine particles that can pass through the lungs into the bloodstream and damage organs in the body, fell by as much as 33% year-on-year during the lockdown, according to the report. Analysts calculated the figure by taking the 30-day period with the largest year-on-year reduction in each province.

However, air pollution has come roaring back since April as governments in China have started allowing sections of the economy to reopen. In the 30-day period to May 8, PM2.5 levels were 6% higher than in the same period last year. The three other aforementioned pollutants were also up 6%, 6% and 12% respectively.

Different parts of China’s economy are recuperating at different rates from the impact of Covid-19. While the manufacturing sector is witnessing a relatively fast, “V-shaped” recovery, services may take much longer to get back to where they were prior to the pandemic, according to a report published earlier this month by analytics firm Silk Road Associates.

The CREA report comes as China prepares to convene its biggest annual political meetings later this week, where officials are expected to reveal details of the country’s post-pandemic economic stimulus.

Environmentalists worry that the world’s second-largest economy may rev up tried-and-tested, but highly polluting, growth drivers at the expense of planet-friendly solutions. China embraced a “dirty” recovery in the wake of the 2007-2008 global financial crisis and a similarly smog-causing response to the economic shock of the SARS crisis in 2003, the CREA report noted.

“The rapid rebound in air pollution and coal consumption levels across China is an early warning of what a smokestack industry-led rebound could look like,” Myllyvirta said. “Highly polluting industries have been faster to recover from the crisis than the rest of the economy.”

The fact that air pollution recently exceeded the levels of last year despite the only partial restoration of social and economic activity is a “worrying sign” and “risks reversing the environmental improvements China has achieved over the past few years,” said Li Shuo, a senior global policy advisor at Greenpeace in Beijing.

Policymakers should avoid giving cheap credit to heavy industry, Li added. “The global pandemic calls for a healthy recovery. Relying on polluting industries, which tend to have low financial and environmental sustainability, will hardly help address the current economic crisis and will incite a new one on our environment.”