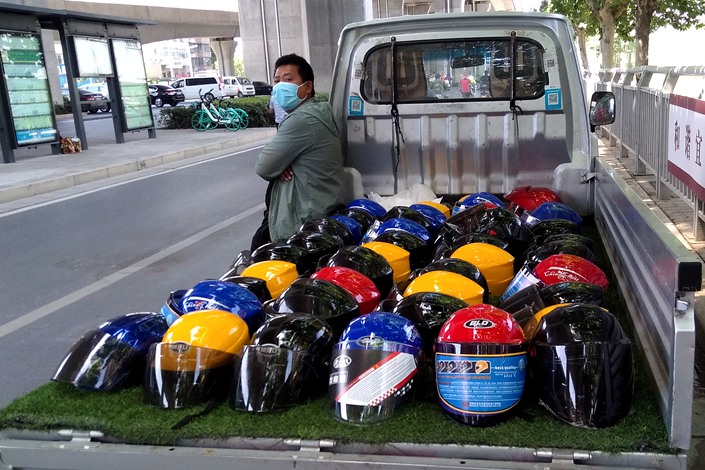 A hawker sells helmets out of the back of a truck on Tuesday in Zhengzhou, North China's Henan province.

Bare-headed e-bike commuters are a common sight on streets across China, with delivery workers often the only people seen wearing safety gear typically mandated by their companies.

But under new rules announced last month, from June 1 every time a rider takes to one of the nation’s more than 250 million registered battery-powered bikes, they’ll be required to wear a helmet or risk being fined.

It will be easier said than done. According to research from Guojin Securities, China’s biggest helmet manufacturers can turn out around 2,000 per day, and there’s very little unused capacity. The firm puts China’s demand gap at about 200 million helmets.

The “One Helmet, One Belt” campaign, its name a nod to China’s signature Belt and Road foreign policy and investment initiative, is intended to bring down traffic deaths. But its short implementation timeline and ambitious scale is creating chaos in China’s helmet market, sparking an acute supply shortage and sending prices through the roof.

Since the policy was announced on April 21, the price of breathable helmets used in the summertime has more than doubled, while the cost of warmer winter helmets is up as much as fourfold. Daily sales at some stores have increased tenfold, according to data from Guojin.

Merchants on e-commerce platform Taobao contacted by Caixin warned of delivery delays and rapid price increases. One said helmets sold for 169 yuan ($24.31) on May 7 were now priced at 258 yuan.

On rival platform JD.com, search volume for motorbike and e-bike helmets combined is up eightfold this month, while turnover has increased 400% year-on-year. Desperate buyers now appear to be turning to other helmets, with demand for the hard hats used in construction also soaring.

E-bikes are a particularly common way to get around in China’s smaller cities, and that’s reflected in JD.com’s data. The turnover of helmets in Jiangsu, Henan, and Yunnan provinces, as well as Tianjin municipality, is up tenfold year-on-year, and up eightfold in Shanghai, Hebei and Anhui.

Leqingxintang Industrial Zone, in the city of Wenzhou in Zhejiang province, is one of China’s largest helmet production bases. Wholesalers have been flocking there since this month to stock up ahead of the new rules coming into effect.

The e-commerce head for a local helmet manufacturer told Caixin that orders had “exploded” since the beginning of May. “My cellphone has been blowing up,” he told Caixin, and factories had more orders than they could deal with.

China’s Ministry of Public Security said the new rules were intended to bring down road deaths, with studies showing the use of safety helmets and safety belts can reduce death tolls by up to 70%.