WHO Members Approve Independent Inquiry Into Global Response to Covid-19

By Dave Yin and Lu Wen 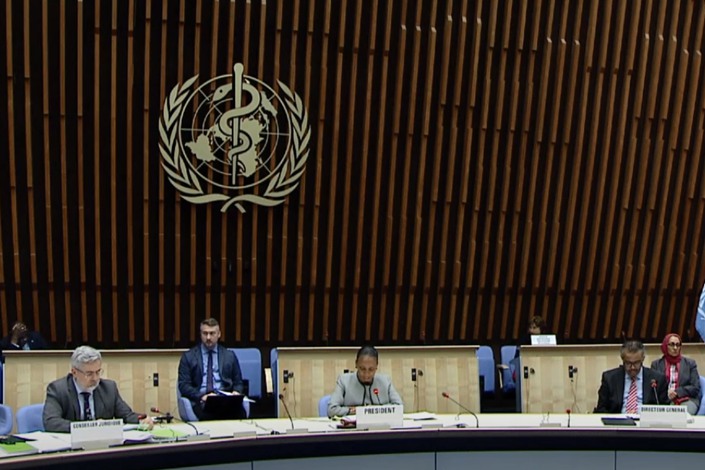 The World Health Organization’s (WHO) member states, including China and the U.S., have adopted a joint resolution for a prompt independent inquiry into the global health response to the Covid-19 pandemic, including the actions of the agency, as the 73rd annual World Health Assembly concluded.

The resolution, which emerged from the UN health body’s first-ever virtual summit, also requested the organization’s director to continue to work to identify the animal source of the virus as well as how it spread to humans, in collaboration with the World Organization for Animal Health, its Food and Agriculture Organization and member countries.

Furthermore, a motion by 14 countries prior to the assembly calling for the inclusion of officials from Taiwan as observers of the assembly has been deferred. Keva Bain, The Bahamas’ permanent representative to the UN, who presided over the 73rd World Health Assembly, proposed that the issue be kept for later in the year, as opposed to during the two-day summit, something she said the nations consented to.

According to Bain, the proposal to include Taiwan will be discussed by the WHO’s General Committee, which would make recommendations for the next assembly session. This is expected to take place later this year, though no date was given.

The WHA resolution bucked a trend that has seen China and the U.S. butt heads at recent international summits over various stipulations in proposed multilateral agreements, in several cases resulting in no final recommendations being made.

First drafted by the European Union, it was first initially proposed by 100 WHO member states, including China, while the U.S. abstained.

On Monday, the first day of the convention, U.S. President Donald Trump and U.S. Health Secretary Alex Azar continued their criticism of the WHO and its director-general, Tedros Adhanom Ghebreyesus.

“We saw that WHO failed at its core mission of information sharing and transparency when member states do not act in good faith,” Azar said in a Monday statement. “There was a failure by this organization to obtain the information that the world needed, and that failure cost many lives.”

Nonetheless, the U.S. approved of the resolution’s final draft, which included language pointing to the “leadership” of the WHO in coordinating a global response to the Covid-19 pandemic.

“We applaud the call for an impartial, independent, and comprehensive review of the WHO’s response, to be undertaken in consultation with Member States, and we urge that work to begin now,” read a Tuesday statement published by the U.S. Mission in Geneva. “We further appreciate the mandate given by the resolution to the WHO to investigate the origins of the virus, and we are confident that through this knowledge, researchers and medical practitioners around the world will be empowered in the pursuit of vaccines and other countermeasures.”

Welcoming the resolution’s adoption, Tedros emphasized that the WHO would review its course of action “at the earliest appropriate moment.”

On Tuesday, Chinese Foreign Ministry spokesperson Zhao Lijian said during a press conference in Beijing that China was a co-sponsor of the draft resolution, which would boost efforts to discover “the animal sources of the virus, and evaluate the WHO's response to the outbreak.”

He also rejected the notion that the draft resolution was equivalent to Australia’s call for an independent international investigation into the pandemic, something Chinese authorities oppose.

“The draft resolution proposes to initiate at the appropriate moment an evaluation rather than to launch an ‘independent international review,’” Zhao said.

“I want to stress that we welcome it if Australia changes its course, completely gives up its political maneuver and returns to the broad consensus of the international community following the relevant WHA resolution,” he added.

In a joint statement on Tuesday, Australia’s Minister for Foreign Affairs Marise Payne and the country’s Minister for Health Greg Hunt hailed the adoption of the “landmark resolution.”

“There is also a clear mandate to identify the source of the COVID-19 virus and how it was transmitted to humans,” the statement said.

“Australia has been clear and transparent in calling for an independent review into COVID-19, which is an unprecedented global health and economic crisis,” it said.