Amid Heightened Uncertainty, China Set to Reveal All About 2020 Economic Plans 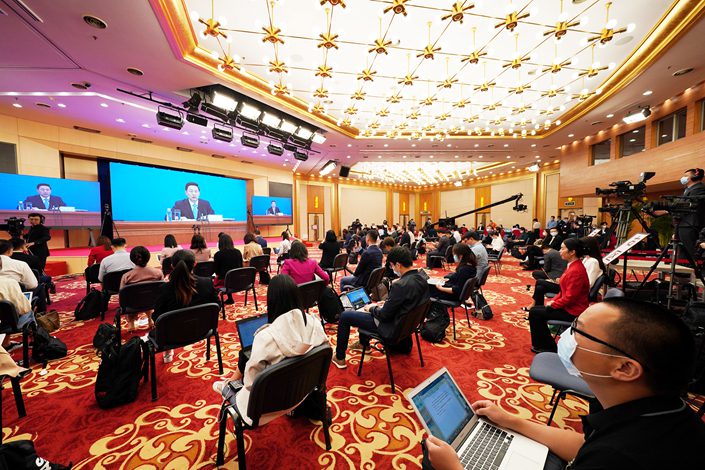 A press conference is held at the opening of the third sessions of the 13th National Committee of the Chinese People's Political Consultative Conference in Beijing.

While the hotly debated annual growth goal for gross domestic product (GDP) will grab the headlines, Li’s work report will also outline measures to guide the country’s recovery from the outbreak of Covid-19, and how monetary and fiscal policies will be coordinated and adjusted to meet the government’s objectives.

The premier’s report, along with documents from the Ministry of Finance and the National Development and Reform Commission (NDRC), the powerful planning agency, will provide valuable insight into the government’s plans for helping millions of businesses and households affected by the epidemic and how it intends to pay for them amid growing calls for stronger measures to shore up the economy.

Here’s what to watch for:

China’s premier officially announces the country’s GDP growth target in his work report to the NPC. Before the Covid-19 outbreak, most economists were expecting him to announce a target of 6% to 6.5% to reflect the gradual slowdown in the pace of expansion over the past few years — GDP growth slid to 6.1% in 2019 from 6.7% in 2018. But the devastation caused by the coronavirus epidemic –– which saw the economy contract 6.8% year-on-year in the first quarter — has thrown those forecasts out of the window. Some economists say a target of 2% to 4% would be more appropriate and realistic after the first-quarter crash and there has been speculation the government will ditch the target altogether.

In its World Economic Outlook report released in April, the International Monetary Fund (IMF) forecast that China’s economy would grow by 1.2% in 2020 with a rebound to 9.2% in 2021.

Over the past few years, the government has allowed the budget deficit to increase in value terms as the economy itself has grown — in 2019 the Ministry of Finance projected a deficit of 2.76 trillion yuan ($388 billion), an increase of 380 billion yuan over the actual gap in 2018.

However, policymakers have been reluctant to allow the official budget deficit-to-GDP ratio, which measures the deficit as a percentage of GDP, to exceed 3%. This level is seen as a “red line” that shouldn’t be crossed and has its origins in the Maastricht Treaty signed by European Union members in 1992 that requires them to maintain their deficit-to-GDP ratios no higher than 3% and their government debt-to-GDP ratios not exceeding 60%.

However, given the extraordinary circumstances triggered by the epidemic, the Politburo in March gave the green light for more government debt to generate additional firepower to aid the economic recovery, although it didn’t specify a level for the deficit-to-GDP ratio.

The government’s target for the deficit-to-GDP ratio for 2019 was 2.8% and economists widely expect the goal to be raised above 3% this year. Estimates vary from 3.2% to as high as 4%. The true deficit-to-GDP ratio could be even higher when off-budget activity and the borrowings of local government financing vehicles are taken into account. The IMF estimates this augmented fiscal deficit ratio was 12.7% in 2019.

The Politburo and the State Council have already flagged an issuance of special treasury bonds, earmarked for specific policy goals and projects, for the first time since 2007, and an increase in the amount of special purpose bonds (SPB) local governments will be allowed to sell to support infrastructure investment. As of end-April the Ministry of Finance had approved local governments to issue 2.29 trillion yuan of SPBs, compared with 2.15 trillion in 2019. Some analysts forecast overall SPB issuance this year could amount to 4 trillion yuan.

As the “Two Sessions” approach, scholars and analysts have once again begun to debate whether China should monetize its fiscal deficit, which would involve the central bank buying the bonds the government issues to finance the budget deficit. It has been described as a type of quantitative easing.

On one side are those who believe the People’s Bank of China should buy government bonds in the primary market at a zero interest rate, which would provide greater fiscal firepower to meet the need for higher spending. On the other are those who argue the government mustn’t ease up on fiscal discipline and believe such a policy is not only currently illegal under Chinese law, but would involve printing money that could trigger inflation and asset bubbles.

In March, the State Council announced plans to issue special treasury bonds (STBs) for the first time since 2007, but didn’t provide details and was constrained from selling such debt until it got formal approval from the NPC. More information about the size of the STB issuance and how the proceeds will be used is likely to be given at the meeting.

There has been considerable debate about whether STBs can and should be used for one-time expenditures such as investment, consumption and subsidies, with some analysts and scholars saying the bonds should only be used for purposes where they can generate returns that can be used to repay them. Others say STBs could be used to fund financial institutions to bail out firms that have been impacted by the pandemic, increase lending to hard-hit small and midsize firms or buy equity in companies which can later be sold.

Factor market reform has become the latest buzzword in China’s economic policymaking and the government’s work reports may provide more details about this strategy which is aimed at removing bottlenecks and obstacles to growth such as the household registration system (also known as the hukou system), and controls on capital markets and land use.

The Communist Party Central Committee and the State Council on April 9 issued a set of guiding opinions on “improving the market-based allocation mechanism” of factors of production. This is the first central committee document to address in a systematic way how to reform the way factors of production (land, labor, capital, entrepreneurship and technology) are priced and traded.

On Monday, the State Council and Central Committee released another document (link in Chinese) that serves as an overarching guideline for economic policy at the macro level. The document included references to minimizing the government’s role in the direct allocation of market resources.

Factor market reform was first put forward at the 18th Party Congress in November 2012 and again at the 19th Party Congress in 2017, but little progress has been made. The April document specifically mentioned land and labor reforms, including overhauling the rural land expropriation system, relaxing hukou restrictions in most cities and guaranteeing equal employment rights for urban and rural workers.