Opinion: Covid-19 Will Change the World’s Economic and Geopolitical Landscape 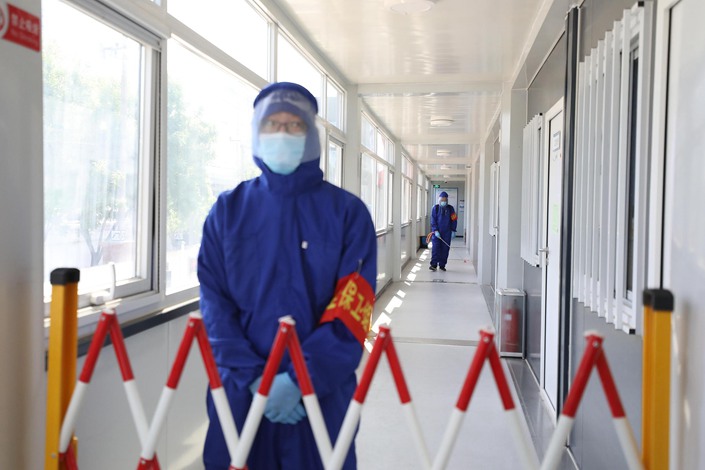 Workers disinfect an area in a remote part of Beijing on Tuesday,

Claude Smadja is president of Smadja & Smadja, a strategic advisory firm in Switzerland. He was also the former managing director of the World Economic Forum from 1995 to 2001.

There is an expanding sea of red ink, as far as the eye can see in the context of a generalized deep recession, in which most countries’ GDPs are expected to shrink between 3% and 10%. This is one key feature of the emerging global economic picture — making Covid-19 not only an unprecedented modern day pandemic, but also an economic, political and leadership challenge of planetary dimension.

The response to the crisis has been an extraordinary effort by governments to mobilize monetary and fiscal policy tools to help their respective economies absorb the shock created by the freezing of almost all business activity as one country after another went into lockdown. By the end of March-early April, $5 trillion worth of additional debt had been created to contain the economic and social damage worldwide. But this was insufficient as the severity of the crisis was becoming more obvious by the day, and pressure was growing for more support to avoid a full economic collapse.

So, one can expect that before the end of May the overall total of stimulus packages around the world — grants, helicopter money, guaranteed government loans, treasury bond issuances, expanded quantitative easing programs — will amount to at least $9 trillion. Most of this will add to the already existing $13 trillion of negative yielding bonds. Even before the development of the pandemic, the International Institute of Finance was putting total global debt at more than $257 trillion and the global debt-to-GDP ratio at around 325% by the first quarter of 2020. All these projections have now been blown up as corporations are piling up debt and new stimulus measures are sending countries’ debt-to-GDP ratios through the roof.

China, still struggling to mitigate financial risk and reduce its overall domestic debt-to-GDP ratio of 300%, is trying to calibrate its support measures and the further loosening of its monetary policy to get its economy into at least neutral territory by the end of the year, after the 6.8% GDP decline in the first quarter. Nevertheless, Beijing will have to cope with an even higher level of debt. Japan’s sovereign debt — the highest in the world at 237% of GDP — is expected to reach 250%.

Will all this money sloshing around mean a return of inflation or/and higher interest rates? Definitely not in a context where the global economy is expected to contract by anywhere between 3% to 5% this year and where prospects for a V-shaped recovery are quickly evaporating — as a more realistic forecast might be at best a U-shaped one, consolidating by 2022.

However, the key point here is how this global sea of red ink will impact growth prospects in the medium and longer term post Covid-19. It would be extremely unlikely to see interest rates rise in the foreseeable future considering the pattern that we have seen after the 2008-2009 financial crisis and the deflationary impact that the pandemic will have on supply as well as on demand at the global level. The positive factor is that it will help service the huge amounts of debt incurred by governments and the private sector. Central banks will be ready to keep quantitative easing programs alive as long as needed to sustain a recovery. This will be even as the urgency to repair or contain the damage created by the pandemic will put pressure on governments not to engage into any kind of belt-tightening. Austerity is going to be a dirty word in the coming period and the preoccupation for balancing budgets will come much later into this decade.

As countries — and the global economy — will have to accommodate to life with high debt, one key risk is that a number of developing or emerging market countries could go into default if they are forced to increase debt beyond their servicing capabilities to avoid a social and economic collapse. This is where conditional extension of maturities and calibrated write-offs will come into play — not out of the goodness of lenders’ hearts but rather out of smart self-interest.

We are not yet there as a lot of uncertainty remains about how, when, and at what total economic and social cost this pandemic will be tamed. Nevertheless, some key consequences of this crisis are already emerging.

First, the post Covid European Union will be more divided than ever. The Southern countries hit hardest by the pandemic will continue to nurse grudges against their northern neighbors and their refusal of genuine financial solidarity. French President Emmanuel Macron is definitely right in asserting that any solution claiming to help countries such as Italy and Spain overcome the crisis just kicking the can of an aggravated debt burden down the road and not demonstrating genuine financial solidarity will create an existential threat to the whole European project.

Second, the pandemic will widen the existing differential between France and Germany’s economic might as Berlin entered the crisis — and will come out of it — in a much stronger position financially and economically than Paris. And Germany has so far suffered more than three times fewer fatalities from the pandemic than France. This will hamper even more President Macron’s efforts to impose his vision of Europe on his reluctant partners to the east and north, which we will keep the EU and the eurozone in their present half-baked mode.

Third, Germany and China will be among the top countries to emerge first from the crisis as they are one step ahead of the curve. And this is true despite all of China’s structural economic issues and despite the vulnerabilities that have grown more apparent in the German economic and growth model. Both Beijing and Berlin have the ability to mobilize strong resources, and their solid relationship and very strong economic and business connections – China is Germany’s No. 1 trading partner — will create synergies between them as they strive to revive their economies.

Fourth, there will be no Covid 19 winner in the soft power competition between Washington and Beijing. China’s image will suffer from the consequences of its lack of transparency at the beginning of the pandemic, and the Trump administration has made of its management of the pandemic a case study of incompetence and incoherence — which would be laughable if the consequences were not so tragic.

However, when it comes to hard power, expect China — maybe not in the short term, but indeed in the medium term — to emerge from this crisis in a stronger economic position than the U.S., and presumably with some geopolitical gains as the pandemic has demonstrated to almost every country that it was not possible to count on the U.S. in emergency situations. Whoever succeeds Donald Trump at the White House will have to take on the daunting task of restoring American credibility.

We are just beginning to fathom the shape of the post-Covid economic and geopolitical global landscape.