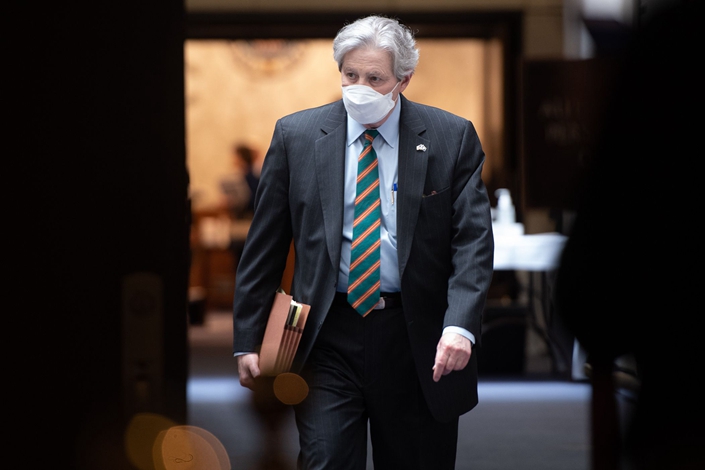 (Bloomberg) — The Senate overwhelmingly approved legislation Wednesday that could lead to Chinese companies such as Alibaba Group Holding Ltd. and Baidu Inc. being barred from listing on U.S. stock exchanges amid increasingly tense relations between the world’s two largest economies.

The bill, introduced by Senator John Kennedy, a Republican from Louisiana, and Chris Van Hollen, a Democrat from Maryland, was approved by unanimous consent and would require companies to certify that they are not under the control of a foreign government.

U.S. lawmakers have raised red flags over the billions of dollars flowing into some of China’s largest corporations, much of it from pension funds and college endowments in search of fat investment returns. Alarm has grown in particular that American money is bankrolling efforts by the country’s technology giants to develop leading positions in everything from artificial intelligence and autonomous driving to internet data collection.

Shares in some of the biggest U.S.-listed Chinese firms, including Baidu and Alibaba, slid Thursday in New York while the broader market gained.

“I do not want to get into a new Cold War,” Kennedy said on the Senate floor, adding that he wants “China to play by the rules.”

“Publicly listed companies should all be held to the same standards, and this bill makes common sense changes to level the playing field and give investors the transparency they need to make informed decisions,” Van Hollen said in a statement. “I’m proud that we were able to pass it today with overwhelming bipartisan support, and I urge our House colleagues to act quickly.”

Stricter U.S. oversight could potentially affect the future listing plans of major private Chinese corporations from Jack Ma’s Ant Financial Services Group to SoftBank-backed ByteDance Ltd. But since discussions on increased disclosure requirements began last year, many other Chinese companies have either listed in Hong Kong already or plan to do so, said James Hull, a Beijing-based analyst and portfolio manager with Hullx.

“All Chinese U.S.-listed entities are potentially impacted over the coming years,” he said. “Increased disclosure may hurt some smaller companies, but there’s been risk disclosures around PCAOB for a while now, so it shouldn’t be a shock to anyone.”

In a sign of broad support for the measure, Rep. Brad Sherman, a California Democrat on the House Financial Services Committee, introduced a companion bill in that chamber. Sherman said in a statement that Nasdaq moved this week to delist China-based Luckin Coffee after executives at the company admitted fabricating $310 million in sales between April and December 2019.

“I commend our Senate counterparts for moving to address this critical issue,” Sherman said. “Had this legislation already been signed into law, U.S. investors in Luckin Coffee likely would have avoided billions of dollars in losses.”

House leaders are discussing the legislation — and a separate Senate-passed bill to sanction Chinese officials over human rights abuses against Muslim minorities — with lawmakers and members of the relevant committees, a Democratic aide said.

The Senate measure — S. 945 — is an example of the rising bipartisan pushback against China in Congress that had been building over trade and other issues. It has been amplified especially by Republicans as U.S. President Donald Trump has sought to blame China as the main culprit in the coronavirus pandemic.

Republican lawmakers have in recent weeks unleashed a torrent of legislation aimed at punishing China for not being more forthcoming with information or proactive in restricting travel as the coronavirus began to spread from the city of Wuhan, where it was first detected.

Trump escalated his rhetoric against China on Wednesday night, suggesting that leader Xi Jinping is behind a “disinformation and propaganda attack on the United States and Europe.”

“It all comes from the top,” Trump said in a series of tweets. He added that China was “desperate” to have former Vice President Joe Biden win the presidential race.

Kennedy told Fox Business on Tuesday that the bill would apply to U.S. exchanges such as Nasdaq and the New York Stock Exchange.

“I would not turn my back on the Chinese Communist Party if they were two days dead,” Kennedy said. “They cheat. And I’ve got a bill to stop them from cheating.”

At issue is China’s longstanding refusal to allow the PCAOB to examine audits of firms whose shares trade on the New York Stock Exchange, Nasdaq and other U.S. platforms. The inspections by the little-known agency, which Congress stood up in 2002 in response to the massive Enron Corp. accounting scandal, are meant to prevent fraud and wrongdoing that could wipe out shareholders.

Since then China and the U.S. have been at odds on the issue even as companies including Alibaba and Baidu have raised billions of dollars selling shares in American markets. The long-simmering feud came to the forefront last year as Washington and Beijing clashed over broader trade and economic issues, and some in the White House have been urging Trump to take a harder line on the audit inspections.

Last week, Trump said in an interview on Fox Business that he’s “looking at” Chinese companies that trade on the NYSE and Nasdaq exchanges but do not follow U.S. accounting rules. Still, he said that cracking down could backfire and simply result in the firms moving to exchanges in London or Hong Kong.

While not technically part of the government, the PCAOB is overseen by the Securities and Exchange Commission. The ability to inspect audits of Chinese firms that list in the U.S. is certain to come up at a roundtable that the SEC is holding July 9 on risks of investing in China and other emerging markets.

Senators Kevin Cramer, Tom Cotton, Bob Menendez, Marco Rubio and Rick Scott are also sponsors of the bill. Rubio applauded the passage of the Kennedy-Van Hollen bill and said it incorporated aspects of a similar bill he introduced last year.

“I was proud to work with Senator Kennedy on this important legislation that would protect American retail investors and pensioners from risky investments in fraudulent, opaque Chinese companies that are listed on U.S. exchanges and trade on over-the-counter markets,” Rubio said in a statement. “If Chinese companies want access to the U.S. capital markets, they must comply with American laws and regulations for financial transparency and accountability.”

According to the SEC, 224 U.S.-listed companies representing more than $1.8 trillion in combined market capitalization are located in countries where there are obstacles to PCAOB inspections of the kind this legislation mandates.