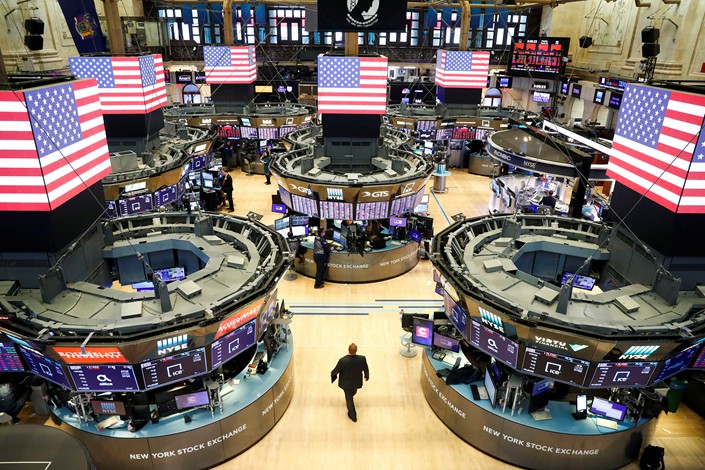 Traders work at the New York Stock Exchange on March 16.

The shock fraud disclosure by Nasdaq-listed Chinese coffee shop chain Luckin Coffee Inc. has dealt a further blow to the reputation of Chinese companies listed overseas and dented the confidence of international investors. It has also triggered another wave of debate over the longstanding problems with the regulation of cross-border audits and punishment of auditors, intermediaries and companies involved in wrongdoing.

The China Securities Regulatory Commission has publicly criticized the deception revealed by Luckin on April 2 –– that revenue had been inflated by some 2.2 billion yuan ($310 million) in 2019 –– and pledged to investigate. But in reality, the watchdog has little power to scrutinize or punish the company even though it’s Chinese because the listed entity is incorporated in the Cayman Islands. Meanwhile, Chinese executives and China-registered intermediaries are able to evade penalties from overseas regulators because of a lack of coordination in cross-border regulation.

“Just like the earlier frauds uncovered at U.S.-listed Chinese companies that triggered a wave of short selling a decade ago, Luckin’s case has again destroyed the credibility of other Chinese stocks in overseas capital markets,” one foreign investment banker involved in overseas listings said. “The issue of cross-border regulatory cooperation between China and the U.S. has not been resolved, and this latest fraud is an opportunity to make progress.”

As long as executives remain on the Chinese mainland they can escape the long arm of U.S. law, even if they are named in class action lawsuits because the two countries do not have an extradition treaty, a legal source with experience in the field who declined to be identified, told Caixin.

“The cost of fraud for Chinese executives is relatively low, so Luckin just piled all of the responsibility on its chief operating officer,” a source with a top foreign investment bank, who declined to be identified, told Caixin. “The fraud took place in the second quarter to the fourth quarter (of 2019 after the company listed), so the intermediaries (involved in the IPO) technically weren’t accountable for the numbers. If this can just be blamed on one executive, how high can the cost be?”

Luckin has said that the inflated sales that prompted its announcement in March took place from the second to fourth quarters of 2019. The company listed in May 2109 so in theory the underwriters can only be held accountable for the first-quarter data.

A person close to one underwriter said that his company has not formally discussed the matter because the fraud occurred after the listing and is not related to the IPO. “The company (underwriter) has a risk reserve, so it depends on how the SEC investigates the matter.”

If overseas regulators want to pursue intermediaries of U.S.-listed companies, they would need to obtain relevant information stored in China, including audit work papers. Otherwise the court will not be able to rule on the case.

“If Chinese companies’ businesses, factories and funds are all located in China and they only have what amount to empty shells in the U.S., how would the settlement be paid if the U.S. court ruled in favor of plaintiffs?” a legal source told Caixin.

The SEC published an article this week co-written by its chairman Jay Clayton, warning investors they need to be aware of the lack of visibility into the accounts of companies with operations in emerging markets, including China. It pointed out that the Public Company Accounting Oversight Board (PCAOB), an organization set up to protect investors by overseeing the audits of public companies, is still unable to inspect audit work papers in China.

“Due to jurisdictional limitations, matters of comity and various other factors, the SEC, Department of Justice and other U.S. authorities may be limited in their ability to pursue bad actors, including in instances of fraud, in emerging markets,” the article said. “For example, in China, there are significant legal and other obstacles to obtaining information needed for investigations or litigation. Similar limitations apply to the pursuit of actions against individuals, including officers, directors and individual gatekeepers, who may have engaged in fraud or other wrongdoing.”

A statement issued by the SEC in December 2018 noted that as of September that year, the PCAOB had run into obstacles inspecting the work of auditors hired by 224 U.S.-listed companies, primarily from the Chinese mainland, Hong Kong and Belgium.

Such challenges stem from an October 2009 notice (link in Chinese) released by the China Securities Regulatory Commission, the National Administration for the Protection of State Secrets and the National Archives Administration setting out restrictions on overseas regulators. They said that if an overseas regulator sought to conduct onsite inspections of Chinese companies, it should first obtain approval from the CSRC and other relevant authorities.

These restrictions prompted China and the U.S. to start negotiations for an agreement that would allow the PCAOB to inspect the work of auditors on the mainland. But so far no agreement has been reached and in the meantime the number of fraud cases at Chinese companies listed in the U.S. has grown, exposed mainly by the investigative work of short-selling firms such as Muddy Waters Research.

The lack of an agreement has not stopped the U.S. authorities from trying to hold Chinese auditors to account. The SEC has issued subpoenas to four major Chinese accounting firms as well as BDO China Shu Lun Pan Certified Public Accountants LLP, requesting them to submit their audit work papers. The PCAOB has also said if it cannot inspect Chinese auditors, the U.S.-listed Chinese companies who hire them could face the risk of a forced delisting.

In May 2013, the CSRC, the Ministry of Finance and the PCAOB signed a memorandum of understanding to cooperate on cross-border enforcement matters. In January 2014, the Chinese authorities said that they had provided audit reports on four Chinese companies to overseas regulators, including the SEC and the PCAOB.

However, the PCAOB’s article this week suggests there hasn’t been much progress. “In China, there are significant legal and other obstacles to obtaining information needed for investigations or litigation. Similar limitations apply to the pursuit of actions against individuals, including officers, directors and individual gatekeepers, who may have engaged in fraud or other wrongdoing,” it said.