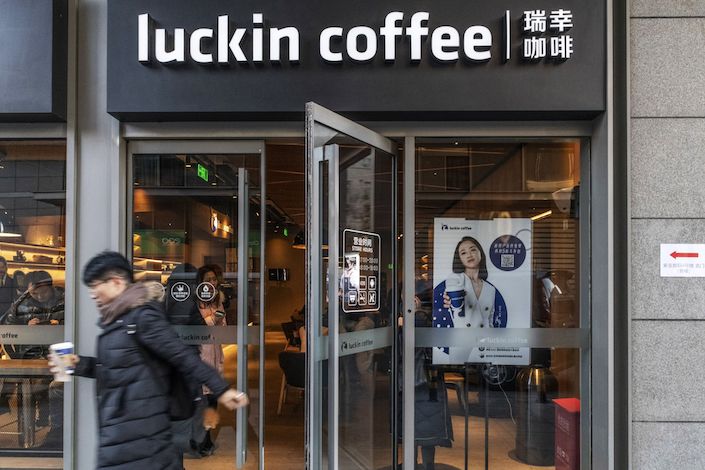 A customer exits a Luckin Coffee outlet in Beijing

Luckin Coffee’s shares plunged 76% Thursday, followed by a 16% drop to $5.38 Friday. Now the stock trades at less than a third of its initial public offering price and is down more than 90% from a record high in January. Notably, some of Luckin’s biggest shareholders cashed out through secondary offerings and stock pledging before the scandal was exposed.

It’s unclear what role Luckin’s independent auditor Ernst & Young Hua Ming LLP may have played. The issues were raised to the board’s attention during the audit of consolidated financial statements for 2019. The fraud took place from the second to the fourth quarter last year, Luckin said Thursday in a filing with the Securities and Exchange Commission.

Ernst & Young didn’t issue any audit opinion for the period of the fraud, according to the company’s previous statements.

Quarterly financial statements for companies listed in the U.S. are not required by law to be audited, but the statements must be reviewed by a certified public accounting firm to ensure accuracy and completeness. A review costs less than an audit, provides only limited assurance and is substantially narrower in scope than an audit. A review also doesn’t include an investigation of the listed company’s internal controls or risk of fraud.

Quarterly reports and annual reports actually use the same draft, and auditing and reviewing are just different ways to describe the same work, an auditor told Caixin.

“If there were any problem, it should have been detected way earlier,” the auditor said.

If there are major problems in an audit, the auditor will communicate with management. If they can’t resolve the issues, the auditor will issue a disclaimer of opinion or even resign, another auditor said. Based on the timeline disclosed in Luckin’s filing, it’s most likely that Ernst & Young discovered the fraud during its audit of the company’s 2019 financial results and presented the findings to the board, the auditor speculated.

Some market participants suggested that Ernst & Young might have conducted its own review after short seller Muddy Waters Research disclosed in January an 89-page anonymous report accusing the company of fabricating financial figures.

The unattributed report posted on Twitter asserted that the number of items sold per Luckin store per day was inflated by at least 69% in the 2019 third quarter and 88% in the fourth quarter, based on 11,260 hours of store video that the report’s authors said they viewed.

The report raised alarms at Ernst & Young, which dispatched an anti-fraud team to intervene. The team uncovered the fraud and then urged the company to conduct an internal probe, an anonymous source close to the auditor told the media.

In addition to Ernst & Young, investment banks and law firms that helped the 2½-year-old coffee startup list its stock on Nasdaq last year have also been blamed for not discovering the fraud earlier.

On Jan. 10, Luckin sold 12 million American depository shares (ADSs) in a secondary offering, including 5.52 million shares from Chinese private equity firm Centurium Capital, an early backer of Luckin. The shares were sold at $42 a share, meaning that Centurium Capital cashed out $232 million for 25% of its holdings in the company.

The anonymous report cited by Muddy Waters in January also said Luckin’s management ― including Chairman Lu Zhengyao, his sister Wong Sunying and Chief Executive Officer Qian Zhiya ― cashed out 49% of their stock, or 24% of the outstanding shares, through stock pledges. Wong controls Mayer Investments Fund, one of Luckin’s biggest shareholders.