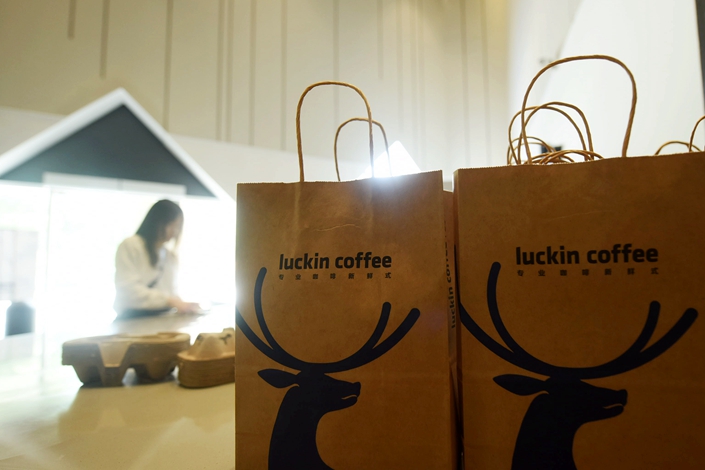 Customers buy coffee at a Luckin store in Hangzhou, Zhejiang province, on May 16, 2019. Photo: IC Photo

Luckin opened trading on Nasdaq at $25 per American depositary share (ADS), pushing the company’s total market cap to $5.8 billion. The company priced its IPO at the top of the projected price range at $17 a share. The strong pricing allowed the company to increase the size of the offering to 33 million shares, compared with previous plans to sell 30 million.

Concurrently with the IPO, Luckin raised an additional $50 million through a private placement with Louis Dreyfus Co., according to its filings. The company’s underwriters also have the option to purchase an additional $76.5 million of “greenshoe” shares that are on offer.

Luckin’s shares traded as high as $25.96 in the morning before pulling back a bit. The stock finished its first day at $20.38.

Less than two years in business, the Beijing-based startup has become one of the youngest Chinese companies to list overseas. It bills itself as a high-tech purveyor of coffee, operating a chain of mostly minimalist shops staffed by one or two baristas. All purchases from the chain must be done using the company’s app.

Luckin is spending millions of dollars on an expansion to challenge U.S. coffee giant Starbucks in China. It plans to open 4,500 stores in China by the end of this year — far more than Starbucks’ current total of more than 3,600 China stores. By the end of March, Luckin reported 2,370 stores in 28 Chinese cities.

The massive expansion and heavy promotions have pushed Luckin deep into the red, a common occurrence for companies at such an early stage of development. The company posted a net loss of 572.8 million yuan ($83 million) in this year’s first quarter on revenue of 479 million yuan. For all of last year it posted a loss of 3.2 billion yuan on revenue of 841 million yuan.

Luckin counts Centurium Capital, founded by former Warburg Pincus Asia chief David Li, as one of its main backers. It has completed three rounds of financing in the private equity market, including from investors led by BlackRock, Legend Capital Management Co. and China International Capital Corp. A week before making its first filing for the IPO last month, Luckin said it raised $150 million in new funds, valuing the company at $2.9 billion.

Despite the capital market frenzy stirred by the fast-growing startup, some investors remained cautious on Luckin’s future. One investor said he stayed away from Luckin’s shares out of concerns over its heavy spending and unforeseeable profitability.

Another private equity investor said he is concerned about Luckin’s fast expansion and its sustainability. Meanwhile, the company is also facing food risks in its supply chain amid its rapid growth, said the investor.

An analyst close to Luckin’s IPO told Caixin that the company is still developing a sustainable business model, with plans to expand its product offerings and shift from delivery to self-pickup as the number of stores grows. He said Luckin will continue to subsidize customers to win more buyers.

Nevertheless, Luckin is in a tough race in China’s fast-evolving coffee market, analysts said. “It must seize the opportunity to launch the IPO and set up its competitiveness,” said a person close to Luckin’s management. “Otherwise, it will be increasingly difficult as rivals emerge.