By Shen Xinyue and Shen Lu 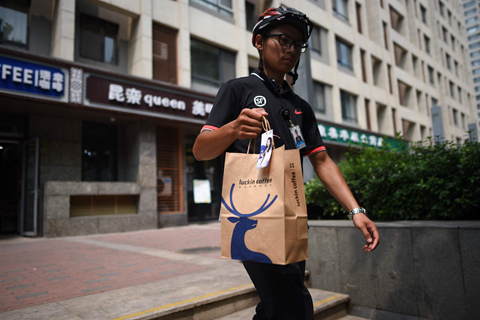 Luckin is aiming to raise as much as $510 million in the offering, setting a price range of $15 to $17 per American depositary share (ADS), according to the company’s updated filing earlier this week. Based on strong demand, the underwriters could sell as many as 4.5 million additional ADSs, raising as much as $76.5 million more. The company would be valued between $3.7 billion and $4.2 billion, according to the updated prospectus.

Luckin is expected to price the IPO on May 16 and begin trading a day later, Caixin learned. The company didn’t confirm the pricing and trading dates.

Market analysts said Luckin is using Starbucks as a reference to price its IPO based on the price-to-sales (P/S) ratio, which is often calculated by dividing the company's market capitalization by its total sales over a designated period. Starbucks currently has a P/S ratio of about 3.5, while Luckin, which is expected to reach 18 billion yuan ($2.64 billion) of sales in 2020 and 30 billion yuan in 2021, will have a P/S ratio of 1.5 based on its price range, analysts said.

Analysts said Luckin’s price range between $15 and $17 is reasonable as it is expected to surpass Starbucks in terms of stores and cups sold in China by the end of this year. China accounts for about 10% of Starbucks’ global revenue and more than 15% of its profit. Analysts estimate that Starbucks, which has a market value of more than $90 billion, has at least a quarter of its value in China.

The Beijing-based chain counts Centurium Capital, founded by former Warburg Pincus Asia chief Li Hui, as one of its main backers. The company officially launched its business a year ago, following a five-month soft opening. Since then it has grown at a breakneck pace, with 2,370 stores in 28 cities in China at the end of March, according to its prospectus. Luckin said earlier it plans to open 4,500 stores in China by the end of 2019 — far more than Starbucks’ current total of more than 3,600 China stores.

To compete with Starbucks and expand its market share, Luckin prioritizes delivery and offers steep discounts and easy-to-use mobile-app ordering. But the rapid expansion has come at a cost. The company posted a net loss of 572.8 million yuan in this year’s first quarter on revenue of 479 million yuan. For all of last year it posted a loss of 3.2 billion yuan on revenue of 841 million yuan.

An analyst close to Luckin’s IPO told Caixin that the company is still developing a sustainable business model, with plans to expand its product offering and shifting from delivery to self-pickup as the number of stores grows. He said Luckin will continue to subsidize customers to win more buyers.

Luckin has completed three rounds of financing in the private equity market, including from investors led by BlackRock, Legend Capital Management Co. and China International Capital Corp. A week before making its first filing for the IPO last month, Luckin said it raised $150 million in new funds, valuing the company at $2.9 billion.

This story has been updated with additional information on Luckin's backers.