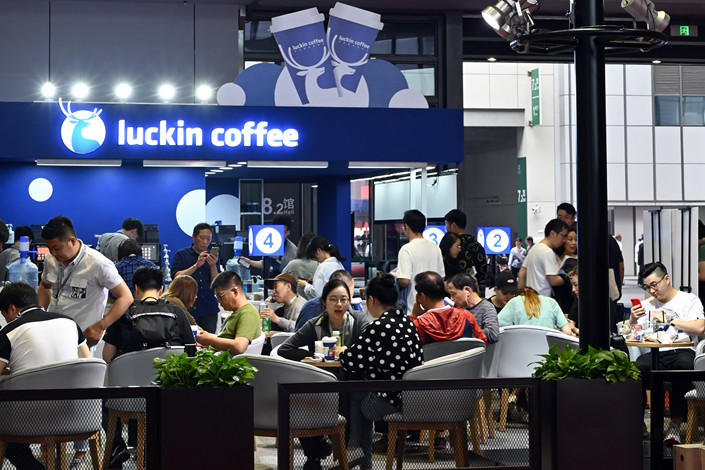 China’s Starbucks challenger Luckin Coffee Inc. raised the fundraising goal for its New York initial public offering (IPO) by a factor of five, according to its latest filing, as it prepares to start trading shares in relatively quick order, less than four weeks after its first announcing its listing plan.

Luckin has grown to become China’s second largest coffee store operator in just a year and a half of operations, using a model that allows it to quickly open small stores with all orders taken by smartphone app. But that breakneck expansion has burned through large amounts of cash, prompting it to look to Wall Street for new funds just two years after its founding.

The company first disclosed its New York IPO plan late last month, and said on Monday it has set a price range of $15 to $17 per American depositary share (ADS), according to its latest IPO filing. If it prices at the top of that range, the company would raise up to $510 million, up sharply from the $100 million it gave when it filed its original prospectus last month.

If the demand is strong, the underwriters could sell as many as 4.5 million additional ADSs, raising up to another $76.5 million.

In addition to the IPO, Luckin will concurrently raise another $50 million at the time of the listing through a private placement, a source with direct knowledge of the deal told Caixin, speaking on condition of anonymity. The deal is expected to price on May 16 and begin trading a day later, the source added.

The Beijing-based chain officially launched a year ago, following a five-month soft opening. Since then it has grown at a breakneck pace, with 2,370 stores in 28 cities in China at the end of March, according to its prospectus.

The company previously said it expects to overtake Starbucks as China’s largest coffee chain by the end of 2019. It said in January it aims to open 2,500 new stores this year, bringing its total to 4,500 by year-end — far more than Starbucks current total of more than 3,600 China stores.

“I think they may be doing this because Luckin needs the cash, badly,” said one analyst who follows the China technology sector, speaking on condition of anonymity due to company policy.

A week before making its first filing for the IPO last month, Luckin announced it had raised $150 million in new funds that valued the company at $2.9 billion.