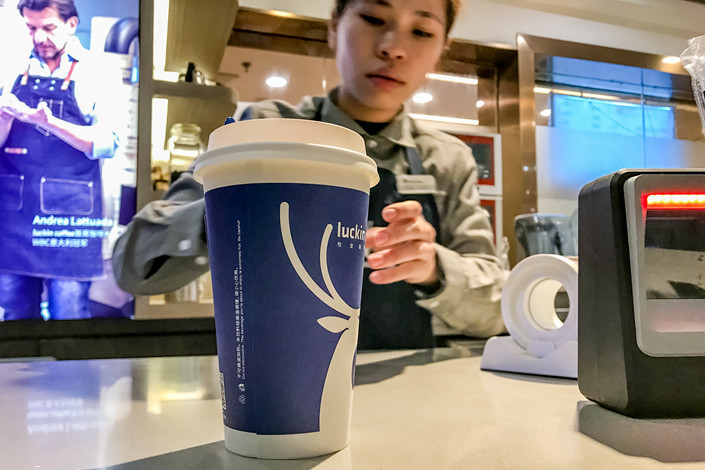 A barista finishes pouring a cup of brew on Jan. 4 at a Luckin Coffee outlet in Guangzhou, South China’s Guangdong province. Photo: IC

* But such breakneck growth has come at a cost. The company posted a net loss of $85 million in this year’s first quarter

Luckin Coffee Inc., which has become China’s second-largest coffee chain just a year and a half after opening its first stores, is aiming to raise up to $100 million through a listing on the Nasdaq, the company said in its first prospectus filing to the U.S. securities regulator on Monday.

The filing comes just a week after Luckin raised $150 million in its latest round of fundraising led by investment firm BlackRock, which Luckin said values the company at $2.9 billion.

The Beijing-based coffee chain, which only takes orders through a smartphone app, officially launched in May, following a five-month soft opening. Since then it has grown at a breakneck pace, with 2,370 stores in 28 cities in China at the end of March, according to the prospectus.

The company previously said it expects to overtake Starbucks as China’s largest coffee chain by the end of 2019. It said in January it aims to open 2,500 new stores this year, bringing its total to 4,500 by year-end — far more than Starbucks current total of more than 3,600 China stores.

The company’s prospectus shows that Luckin opened 297 new stores in the first quarter this year, or about an eighth of the annual goal.

The fast-growing coffee house operates minimalist stores that require far smaller spaces than Starbucks and are targeted mostly at takeout buyers. It allows customers to either pick up their order at a nearby cafe or have them delivered in 30 minutes for a fee after placing orders on the app.

Luckin offers slightly cheaper coffee than Starbucks, but has become popular in its brief history by holding frequent promotions offering the beverage at steep discounts. As a result the company is rapidly burning through cash as it chases market share with its rapid expansion.

It expects to continue making such heavy investment, which could cause it to keep incurring losses in the future, it warned in its prospectus.

Luckin said its sales and marketing expenses hit 168.1 million yuan in the first three months of this year, up threefold year-on-year. Its heavy promotions and rapid expansion have led the company to rapidly use up its cash. It said it had about 1.16 billion yuan in cash at the end of March, down about 30% from the level just three months earlier.