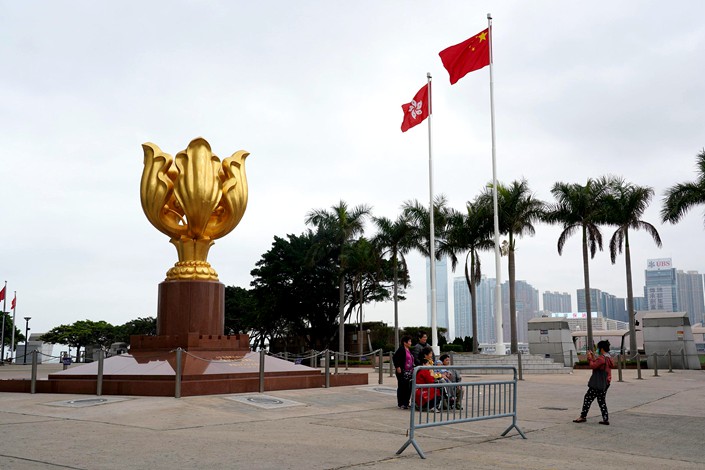 Chinese Premier Li Keqiang vowed “full and accurate” implementation of “One Country, Two Systems” in the Hong Kong on Friday.

China’s national legislature introduced a draft national security bill on Hong Kong Friday, in a legal effort to restore stability in the semi-autonomous region embroiled in nearly a year of social unrest that’s brought uncertainty to the future of the Asian financial hub.

The bill plans to establish a legal framework and implementation mechanism, including allowing national security organs of the central government to set up agencies in Hong Kong for enforcement, Xinhua said.

The legislation came as national lawmakers gathered in Beijing on Friday for a weeklong annual session of the National People’s Congress, China’s legislature, to approve the country’s policy priorities for the year. The submission comes several months ahead of Hong Kong’s Legislative Council election, which is scheduled for September.

The bill was submitted to the NPC for deliberation after Premier Li Keqiang delivered his government work report to lawmakers on the first day of the annual gathering.

Explaining the draft to the gathering on Friday, Wang Chen, vice chairman of the NPC Standing Committee, said that the legislation is necessary due to growing national security risks in Hong Kong.

“The increasingly notable national security risks in the HKSAR have become a prominent problem,” Wang was quoted by the official Xinhua news agency as saying, citing activities that have seriously challenged the bottom line of the “One Country, Two Systems” principle, harmed the rule of law, and threatened national sovereignty, security and development interests.

“Law-based and forceful measures must be taken to prevent, stop and punish such activities,” he said.

According to Article 23 of the Basic Law, Hong Kong should enact national security laws on its own. “But relevant laws are yet to materialize due to the sabotage and obstruction by those trying to sow trouble in Hong Kong and China at large, as well as external hostile forces,” Wang said.

Calling for a change in the long-term “defenseless” status of national security in Hong Kong, Wang said, “efforts must be made at the state-level” to establish and improve the legal system and enforcement mechanisms.

Hours after the vice chairman’s speech, Hong Kong’s Chief Executive, Carrie Lam, issued a statement saying that the SAR government will “fully co-operate with the Standing Committee of the NPC to complete the legislation as soon as possible.”

The statement said the legislation “only targets acts of secession, subverting state power and organizing and carrying out terrorist activities, as well as activities interfering with the HKSAR’s internal affairs by foreign or external forces.”

Those national security risks “are exactly the situations which the political and business sectors in Hong Kong and members of the public have been worrying about over the past year,” it said.

The statement added the national legislature’s bill “will not affect … the independent judicial power, including that of final adjudication, exercised by the Judiciary in Hong Kong.”

Annex 3 of the Basic Law lists the Chinese national laws applied in the SAR. The Basic Law took effect on July 1, 1997, when sovereignty over Hong Kong was transferred from the United Kingdom to China.

The NPC must pass the bill before it can take effect.