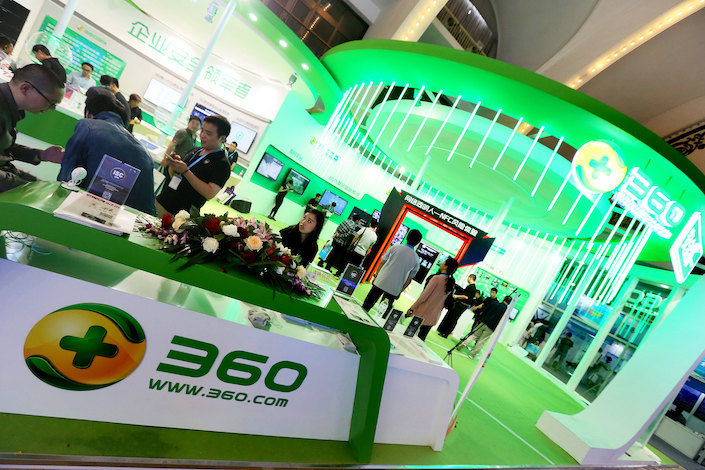 Qihoo 360 Technology Co. is among 33 Chinese enterprises blacklisted by the U.S. Friday.

The U.S. Department of Commerce blacklisted 33 Chinese entities Friday in an escalation of a tech confrontation between the world’s two largest economies. The entities — mostly research organizations and companies operating in the fields of surveillance, artificial intelligence and cybersecurity — were accused of violating human rights and posing a threat to U.S. national security.

Being added to the blacklist, the so-called “Entity List,” effectively bars enterprises from buying products and services from U.S. companies unless the American businesses first obtain a government license. The Trump administration previously put Chinese telecom giant Huawei Technologies and voice-recognition specialist Iflytek Co. Ltd., among others, on the list. Last week, the Commerce Department further tightened curbs on Huawei.

China’s foreign ministry spokesman expressed “firm opposition” Monday to the U.S. move and said the country will continue to take all necessary steps to safeguard the legitimate rights and interests of Chinese enterprises.

As companies assess the impacts of the ban, their stocks responded differently on the first trading day after the announcement, reflecting varied concerns about the sanctions.

Qihoo 360’s Shanghai-listed shares opened higher but lost 0.4% by closing Monday. Qihoo said the ban would cause it some problems but would not have a major impact on daily operations.

Newly sanctioned NetPosa Technologies Ltd.’s Shenzhen-listed shares rose more than 10% Monday. The company, which produces video recorders, said the blacklisting won’t have a major impact on its daily operations and it will continue to localize its supply chain. NetPosa’s main clients are government and public security departments in China with overseas business focusing on Southeast Asia. The company had no business in the U.S.

FiberHome Telecommunication was rattled the most among affected companies with a 9.85% loss in its share price. The Shanghai-listed arm of state-backed FiberHome Technologies was not directly named by the U.S. Commerce Department. But its controlling shareholder FiberHome Technologies and subsidiary Nanjing Fiberhome Starrysky Communication Development Co. Ltd. were among blacklisted companies. Nanjing Fiberhome Starrysky, a software service provider, contributed nearly half of FiberHome Telecommunication’s 2019 net profit.

An industry analyst said it is unclear whether the U.S. ban will be applied only to the software subsidiary or to the entire listed company. FiberHome Telecommunication will experience greater impacts if the ban is imposed on a broader range of its businesses as that may affect its access to supplies from Broadcom Corp. and Lumentum Holdings, the analyst said.

The U.S. ban is likely to target only Nanjing Fiberhome Starrysky and affect its purchase of servers and circuit boards, Everbright Securities said in a research note. It is easy for Nanjing Fiberhome Starrysky to find alternative suppliers, Everbright said. However, if the ban affects FiberHome Telecommunication’s purchase of optoelectronic chips and other components, the core business of the listed company will be hit hard, the brokerage said.

The trade ban may also cast shadow over the listing plans of two Chinese startups. Intellifusion, a Shenzhen-based vision processor developer that was added to the American list, recently completed a pre-listing fundraising of 1 billion yuan ($140 million). The company said it was “deeply shocked and regretted” the blacklisting. Intellifusion said it was actively communicating with all parties, trying to ensure it is treated fairly, and it has also made relevant plans.

Meanwhile, facial recognition specialist CloudWalk, which also completed a 1.8 billion yuan pre-listing fundraising, condemned its addition to the list as “unfair.” CloudWalk was preparing for an initial public listing this year, and it is unclear whether the schedule will be affected by the ban, according to a tech industry investor close to the company.

Analysts said the U.S. sanctions would have little impact on some companies because they diversified their suppliers after peers such as Huawei were blacklisted. Others will seek to replace U.S. suppliers with providers from other countries.

Many of the companies previously targeted via the U.S. entity list have experienced a moderate impact. For example, Iflytek sales grew 27% for the year after it was blacklisted in October.

However, Huawei was forced into a major business overhaul to refocus its smartphone business on the domestic market after its international ambitions were clipped by the company’s May 2019 blacklisting. That stopped Huawei from doing business with Google LLC, which provides the ubiquitous Android operating system and popular apps like YouTube and Gmail.