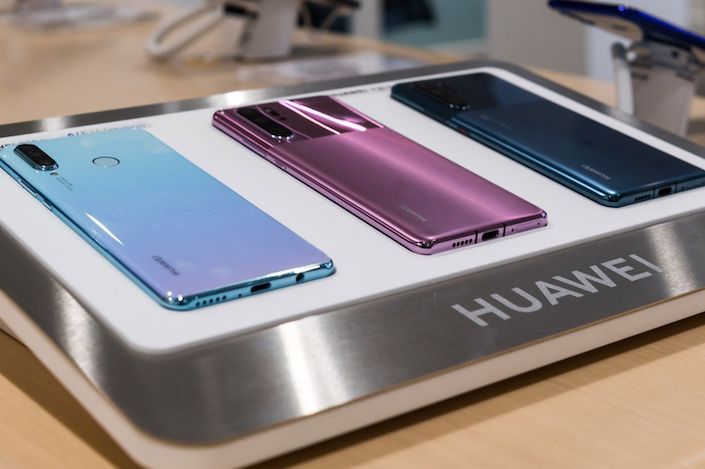 The Huawei P30 Lite and P30 Pro smartphones are displayed at the Huawei store in Brussels. Photo: Bloomberg

(Bloomberg) — The U.K. government is launching a review into Huawei Technologies Co. as officials draw up a plan to reduce the Chinese tech giant’s involvement in new-generation mobile networks over the next three years.

The British government is reevaluating its posture toward Huawei after the Trump administration imposed fresh U.S. curbs this month on China’s largest technology company.

The U.K. now needs to assess the potential impact that the fresh U.S. sanctions could have on British networks, officials said. That review will be conducted by the government’s National Cyber Security Centre.

“The security and resilience of our networks is of paramount importance,” a spokesperson for the British government said in an email. “Following the U.S. announcement of additional sanctions against Huawei, the NCSC is looking carefully at any impact they could have to the U.K.’s networks.”

Huawei represents a political headache for Prime Minister Boris Johnson. His administration decided in January to give Huawei a limited role in 5G wireless networks and fiber while capping its market share and restricting it from the network core, which sees and controls sensitive information.

But U.S. President Donald Trump and his team reacted with dismay to Johnson’s decision, souring relations between the allies as Britain seeks to strike a new trade deal with the U.S. amid its departure from the European Union.

The U.S. told allies that Huawei poses a security threat, saying the company’s technology could be vulnerable to Chinese spies. Huawei has always denied these allegations.

Senior members of Johnson’s Tory party also raised concerns over his plan to allow Huawei a role in so-called noncore parts of the 5G network.

British officials have now been asked to draft a plan to reduce Huawei’s involvement in 5G to zero by 2023, according to recent reports in British newspapers, confirmed by a person familiar with the matter.

“Our priority remains to continue the rollout of a reliable and secure 5G networks across Britain,” Huawei Vice-President Victor Zhang said. “We are happy to discuss with NCSC any concerns they may have and hope to continue the close working relationship we have enjoyed for the last 10 years.”

Members of Britain’s ruling Conservative Party accused China for its handling of the coronavirus pandemic and called for a rethink of the push for closer ties between the two countries. Foreign Secretary Dominic Raab said it could not be business as usual with Beijing after the pandemic.

Tories have warned that it will be harder for Johnson to get his 5G plans through Parliament in the aftermath of the coronavirus crisis.