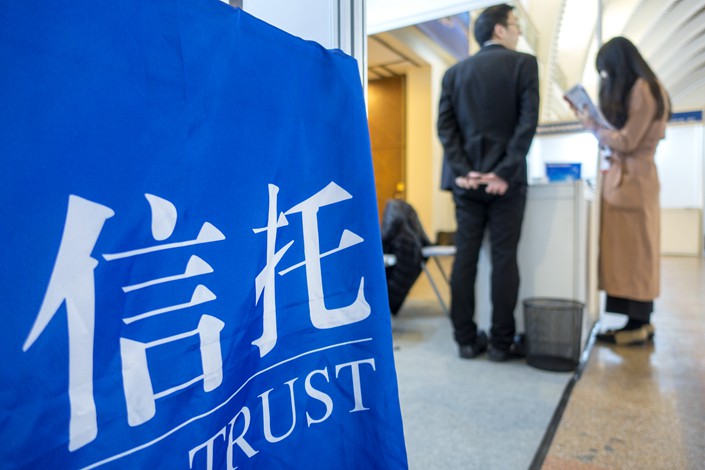 With more money chasing fewer quality projects to invest in, trust firms have been running into more competition.

Trust companies in China have been having trouble finding new projects to invest in as a deluge of cheaper money in the wake of the coronavirus pandemic has given their clients more options for borrowing money elsewhere.

The situation spells trouble for the country’s trillion-dollar trust industry, which has served for years as a major source of alternative funding for companies that have difficulty obtaining financing from more conventional sources like banks. But the pandemic has changed that as the central bank has loosened monetary policy to offset the economic damage of the outbreak, leaving trust firms with a lot more competition.

Major clients such as real estate developers and local government financing vehicles (LGFVs) have begun to get more of their financing through banks and bond markets at lower costs, industry insiders told Caixin. Some who still consider going to trusts for funding have asked them to lower their lending rates.

China’s trust companies, which had 21.6 trillion yuan ($3 trillion) in assets under management (link in Chinese) at the end of 2019, invest in a wide range of assets including bonds, stocks and loans to private companies and LGFVs.

The shortage of borrowers began during the Lunar New Year holiday in late January, when the coronavirus outbreak weakened the market, a manager of a trust company based in northern China told Caixin. The company has not issued a single new trust product since the holiday, and its three current products are all linked to old projects.

“Financiers prefer to issue bonds as costs are relatively low and bond issuances do not require collateral,” a bond investment manager with a brokerage told Caixin, adding that some firms that were unable to issue bonds in the past can now do so as investors’ risk appetite is higher than before, which has hurt trust companies.

Since January, the central bank has been cutting policy interest rates and injecting liquidity into financial markets to offset the economic damage from shutdowns and other measures to control the outbreak. That has led to something of a boom in the bond and loan markets. According to central bank data (link in Chinese), the value of outstanding corporate bonds at the end of April was up 19.4% year-on-year to 26.1 trillion yuan.

In the wake of the pandemic, banks have been instructed to lend more to companies, especially small and midsize businesses, and to cut loan costs. Outstanding yuan loans at the end of April reached 160.5 trillion yuan, up 13.1% year-on-year.

All the new money pouring into financial markets appears to have pushed down borrowing costs. Generally speaking, that means lower returns for lenders like trust firms, leaving a shortage of projects out there that look like they will turn a profit.

It’s a problem now facing many institutions with money to lend, said another trust firm manager. “It’s not just the trust companies that are short of assets,” the manager said. “Banks and bond markets are all short of assets. The returns on quality assets are falling.”

With more money chasing fewer quality projects to invest in, trust firms have been running into more competition, which has hurt their bargaining power to obtain higher rates from borrowers. Last year, several LGFVs in a southwestern city were willing to pay financing costs of 10% to 11% on their loans, but this year they won’t accept anything higher than 9%, a trust manager at a midsize firm told Caixin.