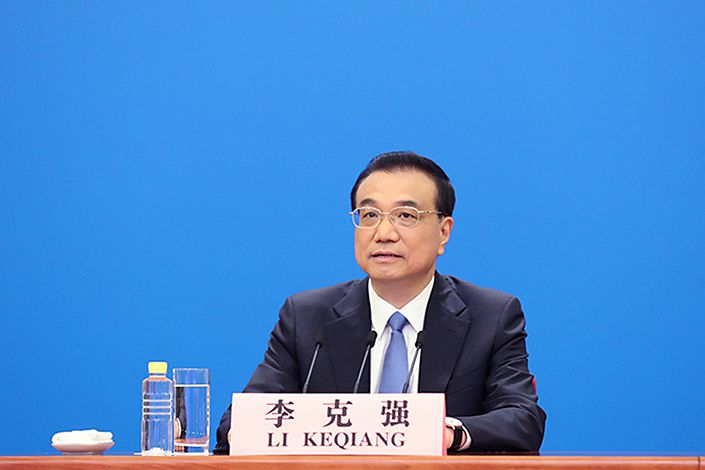 Premier Li Keqiang answers questions at a press conference Thursday at the Great Hall of the People in Beijing. Photo: Xinhua

In a two-hour news conference (link in Chinese) conducted partly by video link due to the coronavirus, he responded to questions on the abandonment of the country’s annual GDP target, China’s economic recovery plan, the Covid-19 pandemic, the national security resolution on Hong Kong, and China’s relationship with the United States.

Here are some highlights from the event.

Last week, Li said China would not set an economic growth target in 2020 in order to focus on stabilizing employment, easing poverty and preventing risks. It is the first time in decades that the country hasn’t set a GDP target.

Responding to a question from a Reuters journalist, Li said government had settled on “forceful” measures to rehabilitate China’s economy amid the Covid-19 crisis. Junking the GDP goal would allow the country to focus on pressing issues like joblessness and basic livelihoods.

Instead of flooding the economy with liquidity, China had decided to increase its budget deficit, issue special bonds, and ease fees and costs for companies, a strategy that aimed to support employment and basic livelihoods, thereby sustaining consumption power and rehabilitating the market, Li said.

Li said China needed to craft creative policies to relieve the pandemic’s severe impact on the economy, revive the market, and stimulate consumption.

The country will channel funds to primary-level governments that can be used to prop up social welfare payments, support small businesses and keep workers employed, Li said.

The central government would also dramatically cut “nonessential” expenditures so more money can be funneled into securing basic living standards, and urge local administrations to tighten their belts and avoid “spending splurges,” he said.

Despite the increased economic uncertainty, China remained committed to its longstanding target of eradicating absolute poverty by the end of 2020, Li said.

China supports an international independent inquiry into the emergence of the virus, Li said, repeating recent claims made by President Xi Jinping to the World Health Organization in which he said the country had acted with “openness, transparency and responsibility.”

Defending China’s participation in international efforts to contain the virus, Li said the country must adopt a science-based approach to investigating the roots of the pandemic and “no cover-up will be allowed.”

Calling the virus the “common enemy of humanity,” Li said China would support research and development of tests, treatments and vaccines and believed the results should be public goods shared by the world in defeating the virus.

China will endeavor to keep global industrial and supply chains stable and promote further trade liberalization and global cooperation to defeat the virus, he said.

Different social and economic systems sometimes create differences between the two superpowers, but proceeding in a spirit of mutual respect and cooperation will be conducive to bilateral relations and the world, he said.

Chinese and American diplomats have repeatedly clashed over the origins of the coronavirus outbreak and failures to control its spread.

On Thursday, China’s government approved a national security resolution that lays the groundwork for Beijing to enact anti-sedition laws in Hong Kong, a move that critics say will seriously erode the territory’s semiautonomous status.

Questions by a reporter from Phoenix TV, a partly state-run broadcaster, Li said the move did not herald the end of the “One Country, Two Systems” policy in the former British colony and Hong Kong would still be able to govern itself with a “high degree of autonomy” in accordance with the Basic Law, the territory’s mini-constitution.

In a notably brief response, Li added that the bill was important for the “steady implementation of one country, two systems and for Hong Kong’s long-term prosperity and stability.”