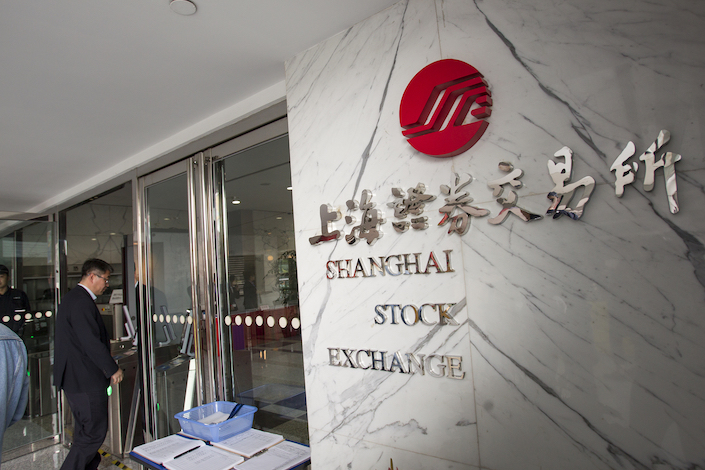 (Bloomberg) — The Shanghai Stock Exchange is considering the first overhaul of its benchmark index in three decades so that it better reflects China’s increasingly high-tech economy, according to people familiar with the matter.

The exchange is planning to adjust the timing for newly listed stocks to be included in the index and remove some chronically loss-making shares, said two of the people, who asked not to be identified as the matter is private. As part of a long-term overhaul, the exchange may also calculate a company’s market value for the index based on its free float rather than total outstanding shares, the people said.

The overhaul would bring the Shanghai index more in line with gauges like the S&P 500 Index, which calculates market value based on the free float available for trading, as opposed to total shares, which include closely held stock owned by insiders. Given government control of many Chinese companies, the free float of stocks such as the Industrial & Commercial Bank of China Ltd. is small.

If approved, the shift could lead to increased weightings for technology and other new-economy sectors and reduce financial services and energy, two of the people said. The bourse is also evaluating whether to include stocks listed on the tech-heavy STAR board in the index and may create a separate gauge for STAR stocks, one of the people said.

“There has been ages-long criticism that the Shanghai composite index did not reflect the real economy, which could be a problem given the number of investors and funds tracking it,” said Ge Shoujing, a senior analyst at the Reality Institute of Advanced Finance in Beijing.

Changes to the methodology are still under review and will reflect market feedback, the people said. A representative from the exchange declined to comment.

Launched in 1991, the Shanghai Stock Exchange Composite Index tracks 1,555 stocks on the bourse in China’s financial hub. The index has remained little changed, hovering around 3,000 over the past 10 years while the S&P 500 Index has climbed more than 171%, partly because the China gauge hasn’t captured the country’s fast-growing new economy. Eight of the top 10 stocks in the index are financial or energy companies.

“The revamp will finally break the curse of the Shanghai composite being perpetually stuck at 3,000, as retail investors like to joke about in dark humor,” said Wang Zhuo, fund manager at Shanghai Zhuozhu Investment Management Co. Ltd. It would “boost morale” of investors convinced that there’s no hope of making money from China stocks, he said.

Liquor giant Kweichow Moutai Co. tops the index weighting at 5.2%, while financial companies including Industrial & Commercial Bank of China and Agricultural Bank of China Ltd. make up more than a third of the weighting. The industrial sector, which includes PetroChina Co., accounts for more than 16% of the capitalization-weighted index.

One challenge for the exchange is the lack of big technology names. Most of the tech and internet giants in China, such as JD.com Inc., Tencent Holdings Ltd. and Alibaba Group Holding Ltd., trade in New York or Hong Kong.

Li Xunlei, chief economist at Zhongtai Securities Co., said the exchange should act “sooner rather than later” to consider revamping the index by including stocks traded on the STAR board and removing chronically loss-making companies. The exchange launched the STAR board of startup technology stocks last year.

Analysts also welcomed the potential change in listing requirements. Under current rules, companies can join the index on the 11th day after their initial public offering, meaning the index fails to capture their gains in the first few days of trading.

“By the time they are included, these stocks have, or are close to peaking,” Wang said.

The exchange will take steps to avoid a sudden rise or fall in the index as a result of the overhaul, and changes will be gradual with new entries added over time, the people said.

Although the index has lagged behind U.S. benchmarks in the past decade, it has posted an annualized return of more than 11% since inception, topping the S&P 500 over the same period. The smaller CSI 300 Index, which tracks stocks in Shanghai and Shenzhen and is more widely followed by exchange-traded funds, also has about a 33% weighting in financial services.

The Shanghai index review comes amid growing U.S.-China tensions that may result in more stringent rules for Chinese companies seeking to list in New York. Nasdaq Inc. is planning new rules that would make initial public offerings more difficult for some Chinese companies.

The U.S. Senate, meanwhile, overwhelmingly approved legislation last week that could lead to Chinese companies such as Alibaba and Baidu Inc. being barred from listing on U.S. exchanges unless they can certify that they’re not under the control of a foreign government.