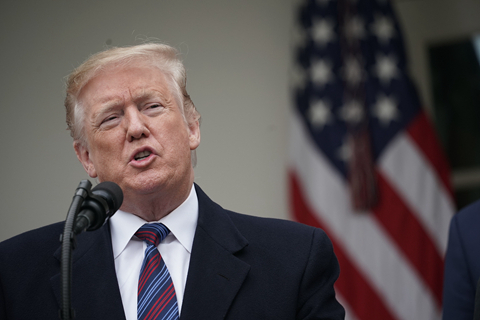 U.S. President Donald Trump speaks at the White House in Washington on Friday.

U.S. President Donald Trump announced Friday the U.S. would begin the process of stripping some of Hong Kong’s privileged trade status without detailing how quickly any changes would take effect and how many exemptions would apply.

Trump’s long-touted response to China for its new Hong Kong security resolution included a barrage of criticism, but stopped short of fully escalating tensions between the two nations. “Our actions will be strong. Our actions will be meaningful,” Trump said in the White House Rose Garden.

U.S. stocks erased losses and traded little changed as Trump stopped short of implementing more draconian measures against China, with the S&P 500 Index up 0.5% at close in New York.

The president said the U.S. will terminate its relationship with the World Health Organization, which Trump has accused of being too deferential to China and of failing to provide accurate information about the spread of the coronavirus.

Both moves are tangential to China’s policy on Hong Kong and don’t strike at Beijing to the degree that some in markets had feared earlier in the week. For instance, there was no unraveling of the phase one trade deal signed between the world’s two biggest economies in January.

Trump repeated a list of his grievances with China and punted tougher policy measures that his administration had discussed, including financial sanctions.

“This binds the president to nothing with regards to China,” said Derek Scissors, a China analyst at the conservative American Enterprise Institute. “With regards to a Hong Kong policy, it is a nonevent. Nothing happened.”

Chinese foreign ministry spokesman Zhao Lijian said in a press conference on the day before Trump’s speech that “Hong Kong is a special administrative region of China and a subnational administrative region directly under the Central People’s Government of China … This matter is China's internal affair and no foreign country has any right to interfere with it.”

Trump also said at Friday’s press conference that he will set up a working group on financial markets to look into Chinese enterprises listed in the U.S. to protect American investors. He also said he will suspend entries of certain Chinese nationals who are deemed to be potential security risks.

Investment firms should not allow their clients to bear implicit and excessive risks related to fundraising of Chinese companies, Trump said, adding that enterprises from China did not follow the rules.

The White House announced in a statement issued right after Trump’s speech that it will suspend or limit the entries of Chinese nationals engaged in China’s “military-civil fusion strategy” who are seeking to enter the U.S. on an F or J visa to study or conduct research, though there is an exception for undergraduates. The action will take effect Monday, the announcement said.

The White House specified students and researchers subject to the latest restriction as those who have received funding from, have been employed by, or do research on behalf of any organization in China that supports what it called a “military-civil fusion strategy,” the statement said.

There is an exemption for individuals who study or do research in fields involving information that would not contribute to the strategy though exactly what those fields and information are will be determined by the Secretary of State and the Secretary of Homeland Security.

In a separate email, the White House also emphasized that the scope of the latest entry restrictions would be limited and anyone legitimately studying in the U.S. would not be affected.

Trump’s remarks omitted key details about what actions he’s taking, but his tone marked an escalation of hostile relations with China, said Jude Blanchette, China expert at the Center for Strategic and International Studies. “This further entrenches the view in Beijing that we haven’t found rock bottom yet in the relationship,” he said.

Trump ramped up expectations for his announcement on China actions for several days this week. Even without many immediate actions outlined, the president used Friday’s announcement to laud his administration’s tough stance on Beijing with less than six months left before the presidential election.

“This was an election speech,” Blanchette said. “This will be the tone and tempo until November.”