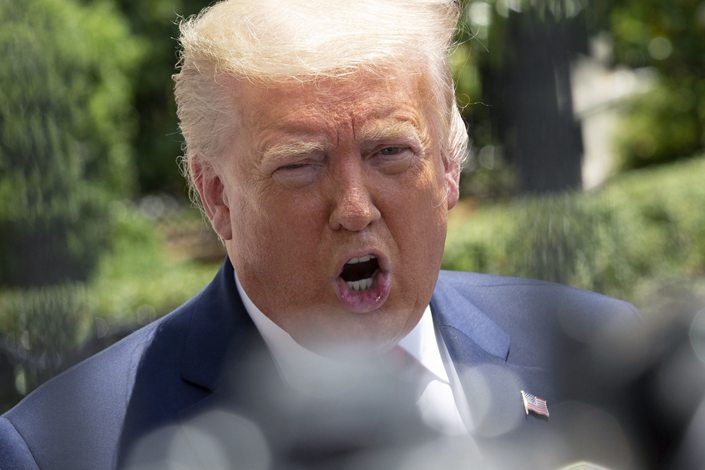 Donald Trump speaks to members of the media outside the White House. Photographer: Stefani Reynolds/Bloomberg

Benchmarks in Tokyo outperformed, while gains were more muted in Seoul, Sydney and Hong Kong. S&P 500 contracts came off their lows hit after Trump promised to deploy large numbers of troops if cities and states don’t act to contain violence from protests over police brutality.

“You have to dominate,” Trump said Monday in a video conference with governors and law enforcement. “If you don’t dominate, you’re wasting your time. They’re going to run over you, you’re going to look like a bunch of jerks.”

Trump has seized on protests against police brutality toward people of color to portray himself as an icon of law and order eschewing the soothing role past presidents have adopted in similar moments as he seeks to turn the election-year conversation from his widely criticized handling of the coronavirus outbreak.

On the Monday call, Trump delivered his most strident message yet as cities across the country impose curfews and governors deploy the National Guard to try to head off another destructive evening. Many other peaceful protests also are underway mourning the death of George Floyd in Minneapolis and demanding an end of police violence directed at African Americans and other minorities.

Earlier, the S&P 500 saw a modest advance. A closely watched measure of U.S. manufacturing rose in May for the first time in four months. The dollar and Treasuries were steady.

Global stocks are trading at a three-month high as businesses reopen around the world following coronavirus shutdowns. Euro-area data on Monday also signaled factories have started down their long road to recovery. Risk appetite returned even amid tense U.S.-China relations that may jeopardize a hard-won trade deal.

“May’s data suggested the worst of the contraction may be behind us, but we see a bumpy restart in coming months,” BlackRock Investment Institute strategists led by Mike Pyle said in a report.

Investors mostly looked past the sometimes violent demonstrations across U.S. cities, over the killing of Floyd, an unarmed black man, by police. Meanwhile, New York has imposed a curfew amid mass protests that led to looting and violence.

Elsewhere, oil steadied as investors assessed whether OPEC and its allies will extend the supply curbs that helped drive prices higher. The Australian dollar pared a decline and bonds were little changed after the Reserve Bank of Australia left its cash rate unchanged as expected, and said it remained committed to an accommodative approach as long as need.