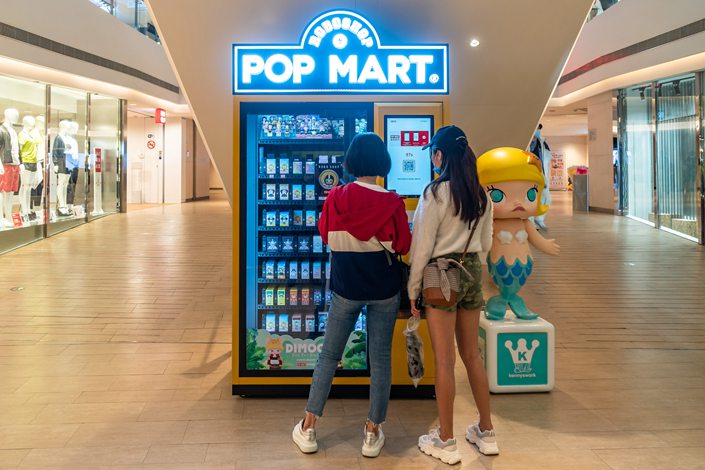 Two girls buy a blind box from a Pop Mart vending machine at a shopping mall in Huangpu district, Shanghai on May 30.

Toymaker Pop Mart International Group Ltd. has filed for a Hong Kong IPO, hoping to attract investors with an explosive growth story fueled by its popular collectible figures that harken back to earlier Western crazes like Beanie Babies and Pogs.

Despite being founded 10 years ago, Pop Mart has only evolved into its current form over the last four years by transforming from a seller of other companies’ toys to developer and seller of its own intellectual property. Its “Molly” series of figurines and toys is one of its oldest self-developed product lines, and accounted for more than 30% of its sales last year.

The company’s products have also boomed on the “blind box” toy phenomenon, which sees products sold in opaque boxes so the buyers can’t see what they’re getting until after a purchase. That adds an element of surprise, and also creates a trading culture whereby people can round out their collections by exchanging their duplicate figurines with other collectors.

Pop Mart’s IPO plan was contained in a prospectus filed to the Hong Kong Stock Exchange on Monday. The company didn’t provide a fundraising target. But based on its $2.5 billion valuation from a fundraising in April and previous comments from a person close to the company that it could sell up to 20% of its stock, the offering could potentially raise up to $500 million, according to Caixin’s calculations.

Pop Mart has posted explosive growth both in revenue and profits over the last three years as its self-developed intellectual property strategy bears fruit. Its revenue grew by a factor of 10 from a modest 158 million yuan ($22 million) in 2017, to 1.68 billion yuan last year. Its profit grew even more quickly from 1.6 million yuan to 451 million yuan over the same period, as it achieved economies of scale that helped to elevate its gross profit margin from 47.6% in 2017 to 64.8% in 2019.

As self-developed toys become the company’s main focus, such products grew from just 29% of its sales in 2017 to 82.1% last year.

Pop Mart sells its toys through a variety of venues, including more than 150 traditional retail shops, 900 vending machines, and through online channels on such popular apps as WeChat and Douyin and on Alibaba’s popular Tmall shopping mall. Online sales have seen particularly strong growth in the last three years, going from just 9.4% of the total in 2017 to about a third of all sales last year.

The company acknowledged that like many retailers, it has suffered during the Covid-19 outbreak that sent a chill over the sector as many consumers spent much of the first four months of the year confined at home to avoid contagion. But it characterized the impact as short-term.

“The demand for pop toy products was negatively impacted during the Covid-19 outbreak, primarily because the mobility of consumers was restricted, the closures of stores, and the distribution capabilities of online sales channels were limited,” it said in its prospectus. “According to the information currently available, our directors are of the view that the Covid-19 outbreak would not have a material adverse effect on our results of operations in the 12 months ending Dec. 31, 2020 and our long-term business development.”