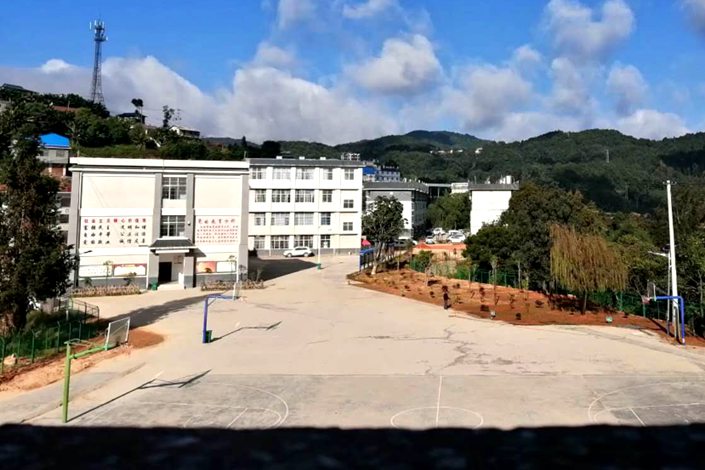 When China’s coronavirus outbreak took hold in February, Li swapped her middle school classroom for a friend’s phone and a patchy internet connection.

Like thousands of others across the country, her school in a poor, remote part of Southwest China shut its doors to curb the virus’s spread and moved all classes online. But for 15-year-old Li, the transition was far from smooth. Her family doesn’t own a computer or smartphone, making her reliant on her classmate’s generosity. And poor connections sometimes made it hard to see or hear her teachers.

According to a report published in April by the government-linked Development Research Center (DRC) of the State Council, 11.5% of rural schoolchildren could not participate in online education “regularly and on schedule” compared with just 1.41% of children in county-level cities, the country’s lowest urban category.

As schools nationwide welcome back hundreds of thousands of students this week, many rural children, parents and teachers worry the pandemic may disproportionately impact the students’ performances on the crucial end-of-semester tests seen as key to social mobility.

Li is one of them. “Because we haven’t had enough time (to study properly), I’m scared I’ll fail,” she said.

Studying on the web is tough if you don’t have the right equipment.

Staying online is no small achievement in Lancang Lahu autonomous county, the mountainous region of Yunnan province where Li lives. With no Wi-Fi at her friend’s house, the families also had to shell out for expensive roaming charges, a significant concern in an area where average annual incomes for rural residents (link in Chinese) were just over 10,000 yuan ($1,402) in 2019, less than one-fifth of the average figure (link in Chinese) for Beijing.

Compared to before the epidemic, Li — whose full name Caixin was asked to withhold because she is a minor — found it harder to participate in class, complete homework assignments and ask teachers about things she didn’t understand. “I think it’s been inconvenient,” she told Caixin in an interview conducted via her teacher’s phone before her school fully reopened this week.

“Although students in the cities might not study particularly hard, they at least have the equipment to do so,” said Liu Bin, founder of the education charity Enjoy Volunteering. “But students without smartphones might as well not be learning at all.”

Although China has made rapid improvements to its communications infrastructure in recent years, up to 500 million people in the country do not have web access, according to a report (link in Chinese) published in April by the government-affiliated China Internet Network Information Center. Internet availability differs markedly between the cities and the countryside, with just 46.2% of rural residents able to surf the web compared to a nationwide average of 64.5%.

Even when they could get online, internet-based learning rarely matched the quality of in-person teaching, rural students said.

For four months, 13-year-old Ma spent her weekdays huddled over a foot-high glass-topped dining table at her family’s home in Pangwan, a mountain village in the southern reaches of China’s northwestern Ningxia Hui autonomous region.

Using a smartphone, she shares with 12 other family members, Ma, whose full name is also being withheld due to her age, studied in “cloud classrooms,” the official catch-all term for a multitude of online learning services. Her teachers sent her timetables of classes broadcast through the provincial educational TV network, assigned homework on WeChat — China’s ubiquitous social messaging app — and livestreamed their own lessons through the Alibaba-owned virtual office tool DingTalk.

The technology enabled Ma to keep up with her studies, but it still had its limitations. Some of the TV broadcasts lasted just 20 minutes, half the length of lessons at school. Sending questions to teachers on WeChat was a more laborious affair than simply speaking up in class. And when one of her dozen relatives needed to use the phone, she was cut off from her instructors.

Her school finally reopened to all students this week, albeit with mandatory mask-wearing and temperature checks. Ma was relieved to go back. Despite class sizes in excess of 50 children, the school boasts electronic whiteboards, a computer room and even recording equipment.

Nonetheless, the normally solid student feels “pretty scared” that the pandemic may have negatively affected her grades. “My teachers were inevitably stuck behind a screen, so that restricted things a bit,” she said.

Rural students weren’t the only ones struggling to get to grips with the switch to online learning. Their teachers found it tough as well.

One issue was attendance. The lack of smartphone and Wi-Fi access in Lancang, for instance, made it difficult for school staff to ensure pupils were keeping up with their studies.

“There are 41 students in our class, but only 29 of them have parents with smartphones, and just five or six students from slightly better-off households have their own handsets,” said Dao Heying, a teacher at Li’s school.

Even when students did join the virtual classrooms, keeping them on task was another matter.

Compared with urban parents, many of whom could easily work from home, many rural students have parents who work outside during the day and couldn’t make sure their kids focused on schoolwork instead of cutting class, chatting or playing games, teachers said.

Ren Yongsheng, a teacher at Ma’s school in Pangwan, estimated that one-third of his students were missing class during the closure. “Sometimes, when teachers logged into DingTalk or Tencent, (the students) didn’t want to join. They might have thought they’d not kept up with their (expected) study progress,” he said.

Additionally, the pivot toward virtual classrooms confounded many teachers who hasn’t used online learning technology, Dao said. “It was very hard to roll out. Which software or learning platform should we use to conduct lessons — this was also a problem.”

In some ways, China’s drive toward internet learning merely sharpened a rural-urban development gap that goes back decades or more.

Although the country is nearing the end of a nationwide drive to eradicate absolute poverty, rural kids still tend to experience higher levels of deprivation and fewer opportunities than their urban peers. Rural schools often have larger class sizes, poorer-paid and overworked teachers, higher dropout rates and lower college enrollment than their urban counterparts.

Additionally, it’s estimated that more than 60 million rural kids are so-called “left-behind” children who have one or both parents working far from home as migrant laborers. The resulting lack of parent-child communication has been linked (link in Chinese) to a range of juvenile mental health issues.

“Often, these kids don’t have the best relationships with their moms and dads,” said Liu, the education charity founder, adding that many children have effectively learned to raise themselves without the involvement of their parents. “This kind of situation can increase the psychological burden on the kids.”

Ma’s parents were absent for much of her childhood. When she was small, her mother walked out on the family, and her financially profligate father later left as well, leaving Ma with her grandparents. But they, too, went to work in another province. She didn’t start school until after she came under the care of her father’s older brother at the age of 8, two years older than the age at which Chinese children typically start primary school.

Li lives with other disruptions. Her parents, both farmers, sometimes ask her to join them in the fields. Having only attended one year of primary school, they can offer little assistance when Li doesn’t understand something in her textbooks. While at home, she helps care for her younger brother, elderly relatives and two disabled household members.

In recent years, China has issued a flurry of policies aimed at improving rural education.

A policy document (link in Chinese) issued last year by the central government and the State Council, China’s cabinet, outlines plans to strengthen digital and information infrastructure in the countryside to provide “good-quality” learning resources and “shrink the gap between rural and urban education.”

Since 2014, the central government has also ramped up spending on rural schools and teacher training in the countryside.

Where the gap to the cities remains wide, it often falls to nongovernmental organizations (NGOs) to help bridge it.

Since China’s outbreak started, charities across the country have rallied to donate learning equipment to children who need it. Several organizations said domestic media reports touching on the education gap — including a girl in Central China who attempted suicide over lack of access to a smartphone, according to a report by state broadcaster CCTV — helped to focus public attention around the issue.

From February, the Shanghai-based Adream Foundation, one of China’s most prominent education NGOs with public funding of nearly 37 million yuan, started soliciting donations for smartphones and tablet computers for impoverished rural schoolchildren in 10 provinces. It has also partnered with online payment platform Alipay and major mobile carriers to arrange prepaid phone cards and online classes.

Although rural schools are generally far better equipped than they were a decade ago, the pandemic has revealed the persistent chasm between the cities and the countryside, according to Xie Peng, Adream’s vice-secretary.

“China perhaps needs to look more at improving education for these children by strengthening the economic power of these places,” Xie said. “That’s where I think the lingering gap (between urban and rural areas) comes from.”

The long-term impact of Covid-19 on rural children won’t be known for some time. But some experts already fear for the kids’ future prospects.

“Many of these kids drop out of school early or go to work as migrant laborers after leaving, so their future career development is already limited,” Liu said. “But I’m more worried that after the economy goes downhill as a result of the epidemic, they’ll have even fewer opportunities.”