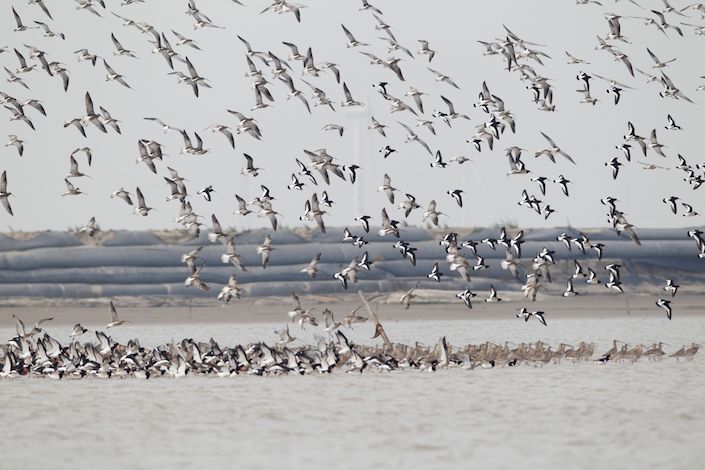 (Bloomberg) — A colony of fewer than 300 birds is standing in the way of one of China’s key hydropower dams in a battle between environmentalists and a construction company that has become a test of China’s pledge to conserve its ecology.

A high court in Yunnan Province is to decide on a case that has held construction of the 270 MW Jiasa River dam in limbo for almost three years on concerns from environmental groups that the reservoir could destroy a key habitat of the endangered Green Peafowl, China’s native version of the dazzlingly plumed birds.

On the one hand environmentalists see it as a trial of how far China’s government and legal system have come in taking environmental protection seriously as the Communist Party drafts its next five-year plan. On the other is a 3 billion yuan ($420 million) investment in renewable energy in one of China’s poorest provinces at a time when the economy has been rocked by the pandemic.

Almost three years ago, Beijing-based Friends of Nature filed a lawsuit to block construction of the dam in southwest China’s Yunnan province. A local court ruled in March that the dam builder — a unit of China Hydropower Engineering Consulting Group — must suspend work pending a new environmental impact assessment (EIA). Both sides appealed.

“Any protection of the green peafowl could only be done once the Jiasa River dam is permanently canceled,” said Zhang Boju, secretary-general of Friends of Nature. “Other, smaller dams in the region where the birds live should also be dismantled.”

The builder, Xinping Co., which has spent more than 1 billion yuan on the project so far, says there is no evidence the dam would harm the peafowls and its original EIA meets the requirements of the law.

Called “the king of birds” in ancient Chinese literature, the green peafowl’s numbers are believed to have slumped to between 235 and 280 birds in the wild in China, mostly in Yunnan, as a result of habitat destruction, poaching and pesticide pollution. The bird is rarer in the country than the emblematic Giant Panda and is classified as “endangered” on the International Union for Conservation of Nature’s Red List. Fragmented groups of related species exist in parts of Southeast Asia.

The Jiasa River hydropower station is listed as a key project by Yunnan’s provincial government. Construction began in 2016 in the Red River valley. Centuries-old forest was felled and land leveled to make space for the project, which was scheduled to begin operating in 2021. The environmental impact assessment, carried out by the Kunming Survey and Design Institute, says green peafowls were not seen in the region and the project would not affect them, although there were “some trails showing their activities.”

Friends of Nature says the dam would flood the last major habitat of the bird in China, a result that was overlooked by the institute, which is a shareholder in the construction company and the general contractor on the project.

“It is like someone is both the player and the judge in the same game,” said Gu Bojian, a doctoral candidate in conservation biology at Fudan University, who has spent three years working with environmentalists to study the peafowls and the effects on their habitat in the valleys of the Red River and its tributaries in Yunnan, China’s most bio-diverse province.

Calls to the Kunming Survey and Design Institute during office hours weren’t answered.

China’s EIA rules have come under fire since they were implemented in 2003, because, while the public is given the right to provide feedback, the company that produces the environment report is paid by the project builder.

“Experts who suggest different views would be excluded from the assessment work,” Gu said.

Wang Canfa, a professor of environmental law at China University of Political Science and Law, said the investor and builder of the Yunnan dam could have avoided the delays and losses if they had done a better job of assessing the environmental effects before starting the project.

“The environment is becoming more and more valued,” Wang said. “Environmental risks should get as much attention as traditional risks in a company’s investment assessment. Otherwise the investors can lose a lot.”

Environmental protection has become one of the priorities for China’s central government, reinforced by President Xi Jinping’s pledge to create an eco-civilization. The government introduced an “Ecological Conservation Red Line” in 2011, aiming to protect important habitats and areas of natural beauty covering one quarter of China’s land from development.

In some cases, those promises have been heeded. In eastern China’s Jiangsu province, at least 314 square kilometers of aquaculture farms in the Yancheng Wetland National Natural Reserve have been shut down, and in the Qinling mountains in northwest China’s Shaanxi province, more than 1,000 illegal villas were demolished and 22 mines shut in the past few years after Xi visited the region and stressed the need to protect nature.

The pandemic, which some scientists believe was started by China’s trade in and consumption of wild animals, has also put pressure on the central government to revise wildlife protection laws this year, including bans on the trade of more species and the regulation of wild-animal use in traditional Chinese medicine.

But the economic effect of the virus has also made environmental protection a burden for local and provincial governments that are trying to meet goals to revive growth. Many have circumvented efforts to curb pollution and construction by framing projects as green infrastructure or poverty alleviation.

“I have heard many people saying to protect the green peafowl is to deprive local people’s right of a better life,” Gu said. “But there are other ways to develop, such as eco-tourism, that could both benefit nature and the people.”