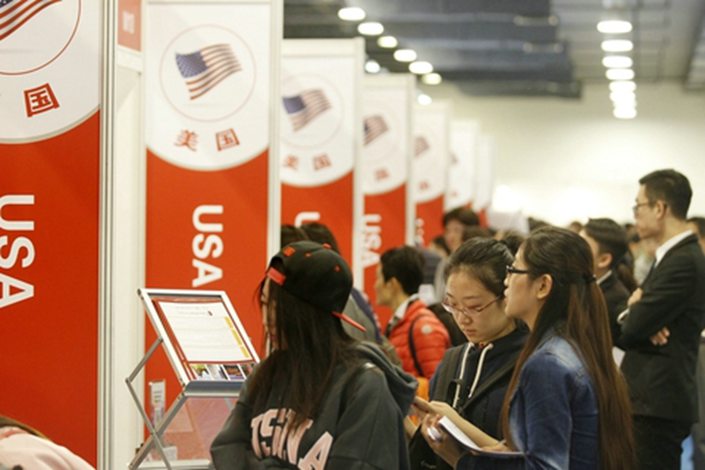 President Donald Trump on Friday announced that the U.S. government would suspend the visas of thousands of Chinese students and researchers in America who have links to the Chinese military. But although the order officially took effect Monday, students, colleges, and lawyers are still puzzling over what it actually means.

The White House proclamation said the suspensions targeted Chinese citizens who study or work for entities that support the Communist Party’s so-called “military-civil fusion strategy” and come to the U.S. on F or J visas — those issued for study or cultural exchange purposes. It exempts undergraduate students, spouses of American citizens, and visa-holders who can demonstrate that their activities do not meet those objectives.

The move was the latest salvo in the increasingly frosty relationship between Beijing and Washington, which have clashed repeatedly over economic, technological and geopolitical influence. Around 370,000 Chinese citizens study in the United States, making up more than one third of the total overseas student population, according to the Institute of International Education, a nonprofit organization based in New York.

Military-civil fusion, which China wrote into its 13th Five-Year Plan in 2015, aims to remove barriers between the country’s commercial and defense sectors in an effort to leverage next-generation technologies to build a world-class military.

Washington views the strategy as a threat to American supremacy and has voiced concerns that it blurs the boundaries between civil and military enterprise. The U.S. has also accused China of obtaining cutting-edge technologies by illicit means, including forced transfers and theft.

Through military-civil fusion, China wants “to acquire and divert foreign technologies, specifically critical and emerging technologies, to incorporate into and advance (Chinese) military capabilities,” it added.

The proclamation instructs the U.S. Secretary of State, in collaboration with the Department of Homeland Security and other agencies, to establish visa review mechanisms and draw up enforcement procedures.

However, it does not give a list of entities engaged in military-civil fusion or outline how American officials should judge such work at the visa stage.

Columbia University’s International Students and Scholars Office released a statement calling the proclamation “shocking and alarming” and said it raised “many questions for which regrettably there are few answers at this time.”

The University of California San Diego said in a statement on its official website that the proclamation “lacks clarity” and it was unable to evaluate the potential impact on its Chinese students.

Jeffrey Gorsky, a senior counsel at the U.S.-based law firm Berry Appleman & Leiden LLP and a former legal advisory on visa issues at the State Department, said in an interview with Forbes that even if Chinese citizens had their visas revoked, it would not affect their legal authorization to remain in the country “so long as they properly maintain their student status.”

The measure would have “little practical impact” on Chinese students already in the U.S. as long as they didn’t leave the country, Gorsky said.

But Chinese citizens with valid student status who are currently outside the U.S. may have their travel visas denied by consular officers once such services resume following the Covid-19 pandemic, he added.