Why Ditching Huawei Will Be Hard for Britain, by the Numbers 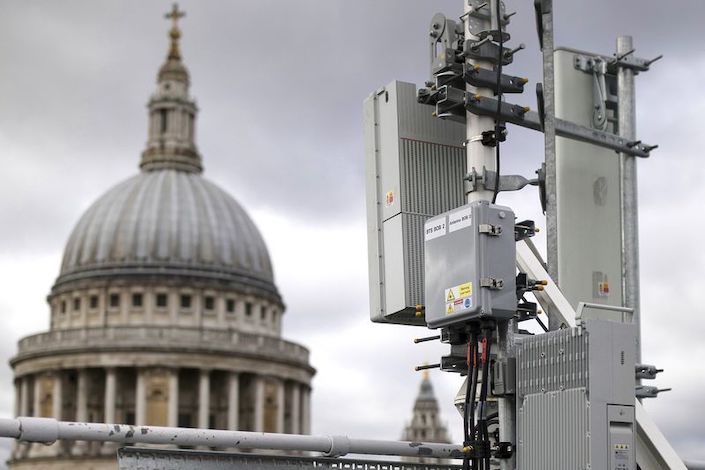 An array of 5G masts including Huawei equipment in central London. Photo: Bloomberg

(Bloomberg) — Britain is rethinking its posture on the role of Huawei Technologies Co. in the country’s fifth-generation mobile networks. Walking away from the Chinese technology giant won’t be easy or cheap.

Growing tensions with Beijing have led Prime Minister Boris Johnson’s government to seek out credible alternatives to Huawei’s antennas, routers and switching gear, Bloomberg reported Wednesday. That could win him favors from the Trump administration, which has urged allies to ban the company.

Yet British carriers are already building 5G networks using Huawei. Any other supplier — even the big European players Nokia Oyj and Ericsson AB — would struggle to fill the void.

The rules are to reach Parliament later this year for approval. However, several lawmakers from Johnson’s own party have pushed back, saying Huawei must have no role in 5G.

That would send a shock wave through Britain’s telecommunications supply chain. The Chinese vendor already accounts for about 35% of the antennas that transmit signals using the current 4G technology. With BT, Britain’s dominant phone company, it’s more than half.

Those aging systems are now under strain from bandwidth-hogging applications such as mobile video, so carriers are desperate to upgrade to 5G. As that equipment must be compatible with 4G, it’s far simpler if it all comes from the same supplier.

Since 5G services were launched in Britain, Huawei has further tightened its grip. Most 5G antennas used by BT and Three UK are from Huawei. The Chinese company accounts for a large proportion of Vodafone’s new network too. The 5G networks are far from complete, and the industry is set to install more gear from Nokia and Ericsson later. But Huawei’s early advantage makes it harder and costlier to backtrack now.

It hasn’t all gone Huawei’s way. U.K. security officials wary of the risk that Huawei’s systems could be commandeered by hackers or hostile states are making sure its gear cannot be used in the most sensitive “core” of mobile networks — the part where data are gathered to be processed and redistributed. BT is to switch the core of its EE network from Huawei to Ericsson before 2023. Other carriers say they don’t use Huawei in the core.

U.S. officials say the idea of core and noncore elements is a gray area with 5G as the technology demands that much data be processed on the periphery. What’s more, Huawei has been involved in other sensitive projects, including for example a security gateway for O2’s network. Personal profiles of some telecom engineers on LinkedIn say they are integrating a real-time payment system from Huawei with O2’s core.

In January BT said the 35% cap on Huawei 5G and fiber broadband equipment imposed in January will cost it 500 million pounds ($624 million). That’s partly the price of ripping out and replacing much of the underlying Huawei 4G gear inherited when it bought EE.

Banning Huawei from 5G entirely would force those costs to multiply across the sector, inflating procurement spending by damping competition. It would effectively leave Huawei’s slice of the market to just Ericsson and Nokia, according to a study commissioned by industry group Mobile UK.

Huawei is considered the market leader. Its equipment could be nine or more months ahead of the pack, technology research firm Assembly said in the Mobile UK report. It put the cost to the U.K. economy at between 4.5 billion pounds and 6.8 billion pounds if Huawei is barred and estimated that 5G rollouts could fall behind by as much as two years.

That would look bad for Prime Minister Johnson, who has pledged to upgrade the entire country’s data speeds by 2025. Coronavirus has underlined the importance of Britain’s communications infrastructure for millions of voters forced to work from home, and the country now faces a dramatic recession.