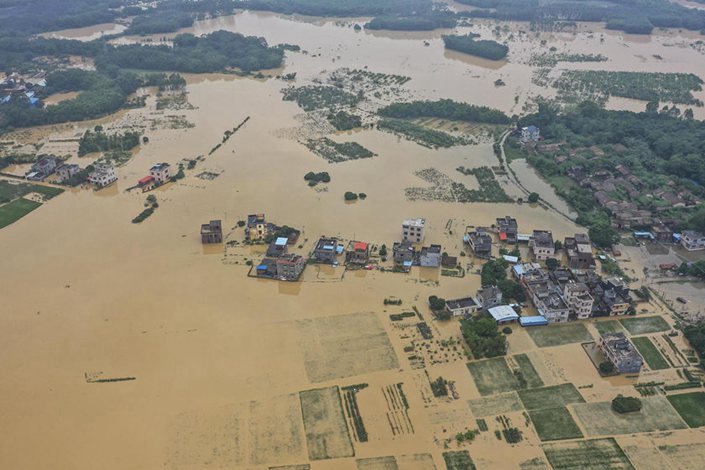 China’s water resources ministry said Thursday the country must prepare for the risk of more flooding this year after severe inundations killed at least six people and forced hundreds of thousands to flee their homes.

Tian Yitang, head of the ministry’s flood and drought prevention office, said at a press conference that southern regions will be especially vulnerable during the flood season, which typically lasts from June through August.

Deluges across parts of China have ruined crops, burst dams, and brought down houses since the start of the month. As of 2 p.m. Tuesday, flooding had affected 2.6 million people, forced 228,000 to evacuate, and caused damage totaling more than 40 billion yuan ($5.6 billion), the Ministry of Emergency Management said.

Tian said unusual rainfall patterns were to blame for the floods. China has seen 6% more rain so far this year than average, including 19 heavy rainfall events, the most severe of which began June 2.

The most recent downpours have spread across 12 provinces and municipalities, Tian said. Longtan, a town in southern China’s Guangdong province, has recorded a total of 1,140 millimeters of rain.

In the worst-hit provincial-level region of Guangxi, flooding killed six people, according to the emergency management ministry. Another person has been reported missing.

Cloudbursts in Guangxi also caused a dam to burst, Tian said. In that instance, government officials issued a flood warning prior to the collapse and evacuated residents. No deaths were reported.

Additionally, two villages that are home to a combined 3,000 people were submerged when an embankment broke in Guangdong, according to Tian. There were no fatalities.

Although the current wave of rainfall is coming to an end, China’s weather office has advised the country to brace for a wetter-than-usual rainy season, Tian said.