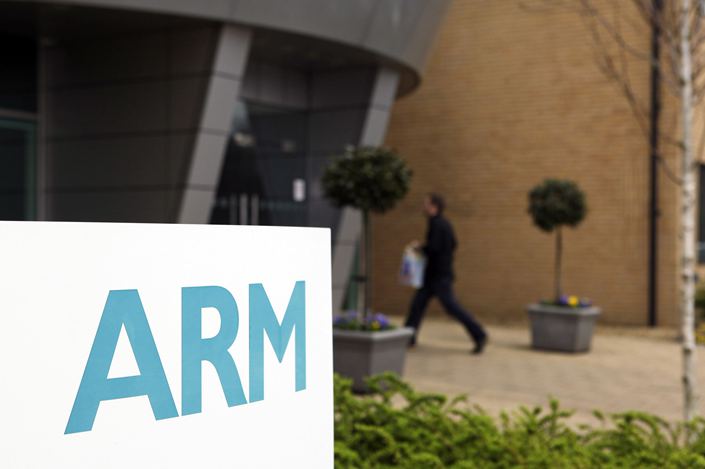 An employee enters the ARM Holdings Plc headquarters in Cambridge

In a statement Wednesday, Arm said the board of its China joint venture Arm China agreed to remove Chairman and Chief Executive Officer Allen Wu. Arm owns 49% of the China venture, and investors led by Chinese equity fund Hopu Investment hold the rest.

However, Arm China issued a separate statement hours later saying Wu was still in charge and the venture was operating normally. The parent then fired back in a joint statement with Hopu accusing Wu of conflicts of interest and violations of employee rules.

The controversy comes at a sensitive time for Arm and its Chinese affiliate, with Western companies struggling to navigate an escalating clash between the U.S. and China over technology leadership. Arm, whose semiconductor designs are used in the majority of the world’s mobile devices, is among the enterprises grappling with the uncertainty of growing tensions.

“Following a whistleblower complaint and several other current and former employee complaints, an investigation was undertaken by Arm Ltd.,” Arm said in the statement jointly issued with Hopu. “Evidence received from multiple sources found serious irregularities, including failing to disclose conflicts of interest and violations of the employee handbook.”

“Wu, a U.S. citizen, was putting at risk the progress of Arm China and the interests of the company’s shareholders and stakeholders,” Arm and Hopu said. Caixin was unable to reach Wu for comment.

Multiple sources told Caixin that Arm and Chinese shareholder Hopu have expressed concerns over Wu’s excessive power in Arm China. They were disturbed by Wu’s moves to set up new facilities and business partnerships without adequate disclosure to shareholders. Wu also set up an investment fund privately without the board’s knowledge, triggering fears over conflicts of interest, sources said.

In response to a Caixin inquiry, Arm China said the company has carried out business and investments in China in an orderly and compliant manner.

Several people close to Arm China told Caixin that the removal of Wu was proposed by the parent and backed by the Chinese unit’s shareholders. Arm gave notice to Wu suspending him from his duties, and Arm China’s board voted June 4 for his departure, sources said.

But Wu challenged the decision, arguing that the June 4 board meeting was convened in violation of legal procedures, making the resolution invalid, people close to the matter said.

A person close to Arm China’s board said the meeting was organized under the supervision of Beijing-based Zhong Lun Law Firm.

“All the procedure and content of the meeting are in line with the law, and the resolution is legally valid,” the person said.

Xu Hao, a lawyer at Beijing Jingshi Law Firm, said according to China’s corporate law, board meetings should be called and chaired by the chairman. But shareholders representing more than 10% of the voting power or more than one-third of the directors can also propose an interim meeting. If the chairman didn’t respond to such a meeting request, the meeting can be held with the presence of at least half the directors, and decisions winning support from more than half of the directors will be valid, Xu said.

Established in April 2018, Arm China’s business includes licensing chip architecture to Chinese companies and providing local services. It operates offices in Shenzhen, Beijing and Shanghai and acts as an intermediary between Arm in the U.K. and clients like Huawei Technologies Co. Ltd. in China.

Wu, an Arm veteran since 2004, has led the British company’s China operations since 2009 and was a key player pushing forward the establishment of Arm China. In 2014, Wu joined Arm’s executive committee, the company's top decision-making body.

As chairman and CEO of Arm China, Wu has enjoyed great independence in the venture’s business operations, people familiar with the venture said.

Arm and Hopu said interim co-CEOs Ken Phua and Phil Tang were named to replace Wu to lead the China unit. The board is working to make a transition to new local leadership, and the company will continue engaging in the Chinese market, they said.

Phua, a Singaporean citizen, has extensive working experience with Arm’s business in Britain and China. Phua is familiar with Arm’s production line and is well known by headquarters, a person with knowledge said. Tang, a Chinese citizen, is new to Arm but has a background in investment banking, which may assist with the company’s contacts with Chinese investors, the person said.

The company has been ensnared in the Trump administration’s campaign against Huawei because of its central role in semiconductor architecture. That conflict escalated after the U.S. in 2019 prohibited the sale of American software and circuitry to China’s largest tech company, a key Arm client. The British company has said it will comply with the U.S. restrictions.

Local media have quoted Wu as saying the company would continue to work with Huawei. Arm continues to supply technology to Huawei unit HiSilicon, but it’s unclear whether it can license future designs to the Chinese company.