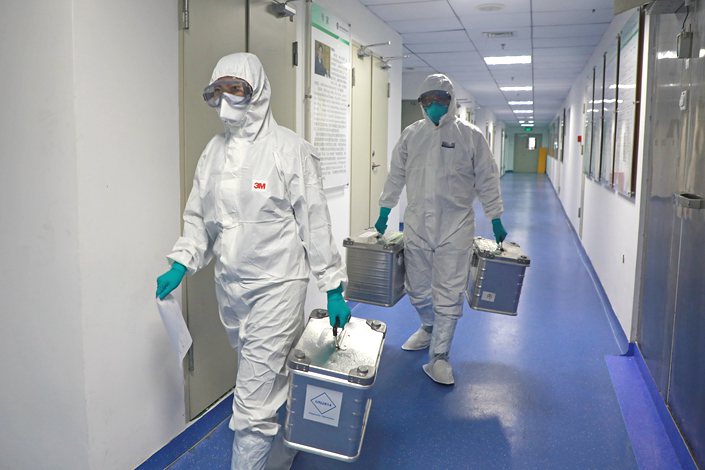 Experts agree the CDC needs to be expanded, but disagree on how.

Chinese health officials and medical experts are locked in a wide-ranging debate over how to strengthen the country’s public health system, after the coronavirus pandemic exposed gaps in its disease control and prevention mechanisms.

At the center of the discussion is the future status of the Chinese Center for Disease Control and Prevention (China CDC). Although the agency has been at the forefront of the fight against Covid-19, it effectively functions as a research and advisory body under the National Health Commission (NHC), China’s health ministry. China CDC’s lack of independence from the NHC has drawn criticism since the start of the outbreak.

Officials and experts interviewed by Caixin said China should take inspiration from the American disease control system and grant the China CDC more decision-making authority, funding, and resources. But they disagree on what form the overhaul should take.

The status of the China CDC

The China CDC operates differently from the U.S. Centers for Disease Control and Prevention (U.S. CDC), which is a federal government agency, according to Chen Zhuo, an associate professor of health policy and management at the University of Georgia who previously worked for the American agency.

Although the China CDC supports the NHC’s efforts to maintain public health through research, planning and disease surveillance, it is subservient to it. The U.S. CDC has more authority to determine policy and conduct public health work across states and borders, Chen told Caixin in an interview.

That means “the China CDC generally has much smaller capacity than the U.S. CDC,” Chen said. Compared to its Chinese counterpart, the U.S. CDC is also less affected by the work of the health department, has more statutory power, and has more power to direct federal funding toward state and county health departments to buttress local-level capacity, he said.

That difference in stature can be seen in how the Chinese and American systems handle public health announcements. Technically, the U.S. CDC’s leadership doesn’t need White House permission to notify the public of health risks, Chen said. In China, the health commission has that authority, not the China CDC.

Some Chinese officials, including the country’s top epidemiologist Zhong Nanshan, have previously called on the government to give the China CDC a status akin to its U.S. counterpart.

“We need to raise the position of disease control centers and give them a certain amount of administrative power,” Zhong said at a February news conference. “If we don’t reform them in this way, the next epidemic will appear.”

In the same vein, NHC Vice-Director Li Bin said at a State Council Press Conference last month that the country was “actively discussing” the need to modernize disease control by focusing on defenses against infectious diseases and fast-moving public health events.

Experts have said the China CDC has obvious flaws: Its two-track nature hinders communication between administrative departments and disease control centers, and its sprawling hierarchies leave workers in ill-defined roles, making them underprepared and uncoordinated when disaster strikes.

The head of the China CDC’s Global Public Health Center, Dong Xiaoping, said at last month’s meetings that the epidemic revealed the shortcomings of China’s infectious diseases law, which only permits disease control centers to collect, sort and analyze data, not publicize it. Forbidding them from making public announcements “will definitely delay the process of effectively informing the public and international organizations about epidemics,” he said.

A group of experts headed by Peking University public health professor Li Liming went further, arguing that China should junk the current disease control system and set up a new bureau outside the NHC, with the authority to independently define policy and draw up development plans.

That’s a step too far for many specialists, including Peking University Hospital public health professor Chen Yude. “You can’t just hang a sign on something and call it a new administrative institution,” he said. “We already have too many of those. The more spread-out things are, the less smoothly they run, and the tougher it is to coordinate.”

Shao Yiming, a leading virologist at the China CDC, struck a similar tone in a March interview with Caixin. “Turning (the China CDC) into a separate administrative department isn’t a good way out, because the nature of its work isn’t suited to that,” he said.

Several disease control center staff said they agreed with the view of former China CDC chief Yang Gonghuan, who told Caixin in an interview that the centers need more administrative and legal authority to carry out their mandate, but there was no need to transform them into separate administrative institutions.

Shao, the virologist, said China’s central government should merge national and provincial centers and make key staff responsible for work in different areas so they “can gain an understanding of the situation in each part of the country.”

He added that the country could also assign responsibility for researching and monitoring certain diseases to regions with relatively high prevalence rates to prevent resources from concentrating in Beijing.

A revamped China CDC should also monitor disease outbreaks in animals, a task currently undertaken by the agriculture department, according to Shao. In America, the U.S. CDC keeps tabs on animal-borne pathogens. Scientists believe the coronavirus likely passed to humans from wild animals.

“The frequency of disease outbreaks that affect both humans and animals reminds us that we need to strengthen cooperation between (the agriculture and disease-control) bodies and establish a common monitoring system,” Shao said.

China’s disease control agencies suffer from another chronic ailment: a lack of staff. About 20,000 people work for the U.S. CDC, compared with 2,000 at the China CDC, according to Shao.

The two systems also differ markedly in terms of specialist personnel: The U.S. CDC has 500 experts in respiratory diseases, far more than the 20 at the China CDC.

Out of the 36 ailments the Chinese government defines as significant diseases, “less than half” were covered by senior experts at the China CDC, Shao said.

Low pay was a commonly cited reason for leaving. A disease control center worker said the average salary is around 80,000 yuan ($11,315) per year, not enough to live well in most major Chinese cities. In comparison, U.S. Masters graduates in public health earn a median salary of $68,000, according to a major American public health advocacy website citing the Bureau of Labor Statistics.

Funding is another challenge. China CDC’s Gao said the country’s spending on disease control institutions as a proportion of total health expenditure declined from 2.9% in 2010 to 2.4% in 2018. That left visible funding shortages for frontline work like testing and monitoring, he said.