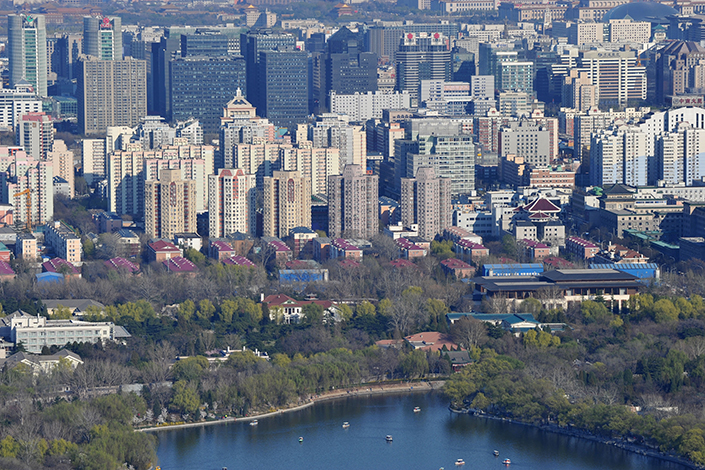 Beijing has reported four more confirmed Covid-19 cases and at least 46 additional individuals have tested positive but showed no symptoms at the moment, local government announced in a press conference on Saturday.

All of the newly confirmed cases were in some way connected with the now-closed Xinfadi Market, a local wholesale market where traces of the virus were found on some utensils and produce, and were all linked with the previous three confirmed cases reported on Friday.

Pang Xinghuo, deputy director at Beijing municipal center for disease control and prevention, said that among the four new cases, one had visited the Xinfadi market while the other three worked at the market’s seafood department, including a driver, a salesperson and a vendor.

Zhang Yuxi, the board chairman of the Xinfadi market told a local newspaper Friday that the new coronavirus had been found on the chopping boards used for cutting imported salmon.

Zhang estimated that more than 10,000 personnel who worked at the market have been subject to nucleic acid testing.

So far, 45 personnel of the Xinfadi market have tested positive for the Covid-19 disease but haven’t showed any symptoms yet, while an additional case from a farmer’s market in the city’s Haidian District has also tested positive with no symptoms, according to Pang.

Not yet identified as non-symptom cases, all of the 46 individuals have been under strict medical observations.

Further investigations tracing the sudden outbreak in the Chinese capital have been underway.

Zhang Wenhong: 18% to 31% of Coronavirus Cases Are Asymptomatic

The suburb Fengtai District, where the Xinfadi market is located, has adopted a “wartime mode”, Chu Junwei, head of the district government said at the same press conference.

He said the government has closed off the market’s surrounding residential areas and traced a total of 139 close contacts of the confirmed cases in the district. Three primary schools and six kindergartens close to the market have also been closed.

More than 500 throat swab samples and nearly 2000 environment samples, including doorknobs, meat products and cleaning pools, have been collected from the Xinfadi market, he added.

Gao Xiaojun, spokesman at the Beijing Health Commission, promised that the city’s testing capacity is capable of testing more than 90,000 people per day.

In addition to the six total local cases discovered in Beijing, China also reported five imported cases on Saturday, according to the National Health Commission.

Zhang Wenhong, a renowned respiratory disease expert at Huashan Hospital in Shanghai, said in a Weibo post on Friday that the country should not overreact to these scattered cases.

“For a long period, the number of local cases in China will be close to zero, but won’t be none — we should have a clear acknowledgment of it and must not overreact to prevent the recovery of economy and society,” he said.

“Even there were no such scattered cases now, [imported cases] will emerge after countries reopen their borders. We should be used to this [normality],” he added.

Caixin has learned that the Xinfadi market had been continuing to operate throughout the last couple of months since the new coronavirus disease first emerged at the Wuhan Huanan Seafood Market in the capital city of the central Hubei province.

A staff member of the market who requested anonymity due to the sensitivity of the matter told Caixin that the market had stopped checking temperatures of individuals after Beijing lowered its emergency response level on Jun. 6.

But all personnel in and out of the market had been required to wear masks and all vehicles had to undergo disinfection procedures since late January, the staff said.

Established more than 30 years agao, the Xinfadi market is the country's largest agricultural wholesale market and supplies more than 80% of agricultural products in Beijing.

The market’s imported salmon which is suspected to have been the host carrier of the new coronavirus has been traced to the Jingshen Searfood Market, about eight kilometers away from the Xinfadi market, according to the market’s board chairman Zhang Yuxi.

Jingshen seafood market was also closed on Saturday. One of the seafood vendors at the market told news website Yidian that their salmon was imported from Norway and the Faroe Islands of Denmark.